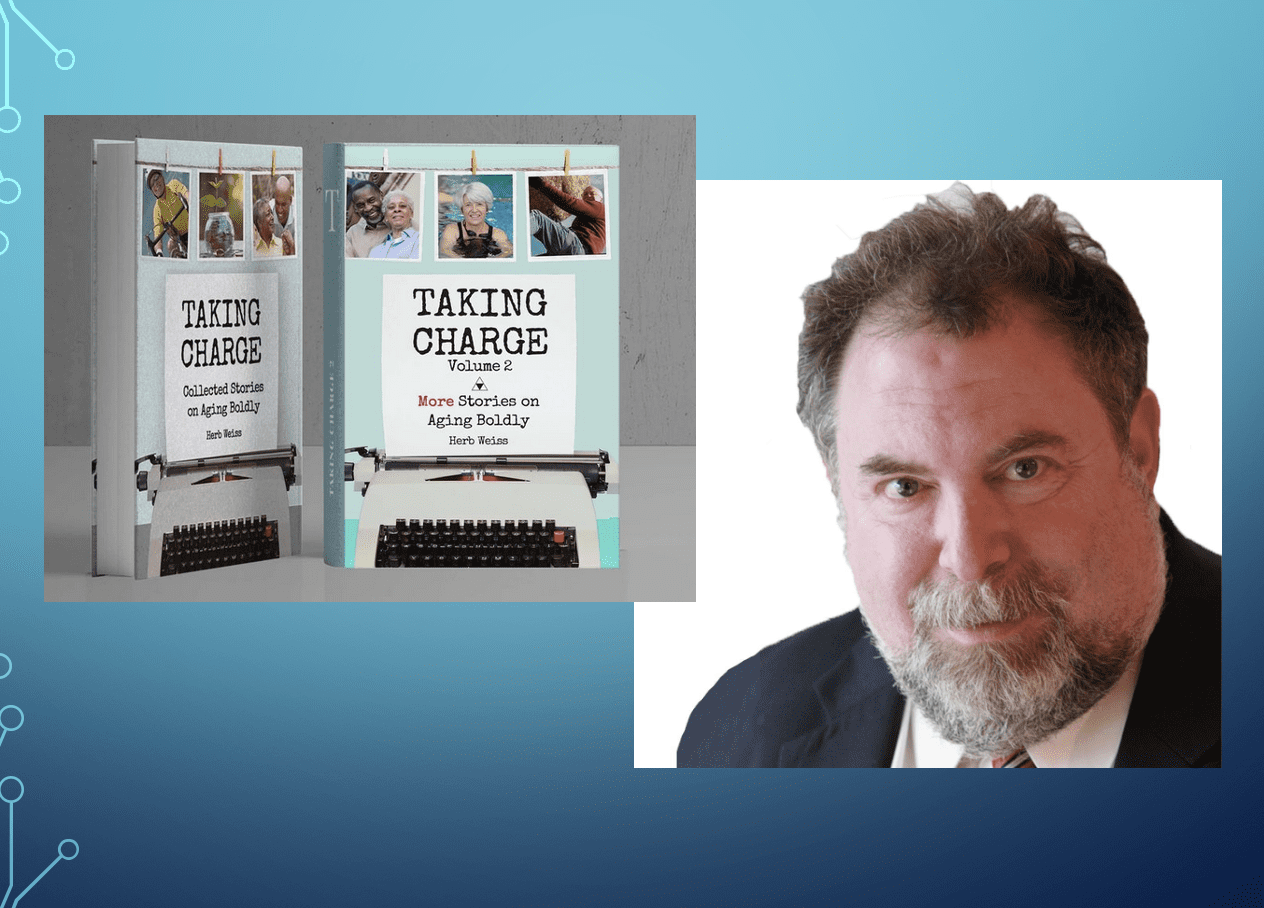 Editor’s Note: Herb and Dr. Michael Fine participated on Saturday in a joint author event and book signing. Held at the publisher’s, bookstore, Stillwater Books in Pawtucket, the event was an opportunity to meet the two RINewsToday authors – books are available – great summer reads! If you know a group who would like to host a book signing for Herb or Michael or both, let us know!

A growing number of aging baby boomers and senior readers turn to newspapers, electronic media, and the internet to investigate issues and identify resources to help them age gracefully. Over the years, Herb Weiss, 67, along with thousands of journalists covering the “age beat” have reported on a myriad of aging, health care and medical issues.  He writes a weekly commentary on aging issues for RINewsToday, the Pawtucket Times, and the Woonsocket Call. His cover stories also appear in a monthly senior publication, Senior Digest.

His latest book, “Taking Charge Volume 2” is packed with even more rich content than Volume 1. And the format makes it easy to consume, in short snacks, rather than a long meal, so to speak, but that makes the savoring of each independent article much more savory! The delight of the book is the Table of Contents, sorting the book into topic areas so, if you have a pressing need for information, you can easily go right to it, without paging back and forth to find your way.

From serious chapters such as mental health, to lighter chapters such as Pets, and Pop Culture, Art & Music, not only are broad chapters noted, but sub-chapter titles as well. While the articles were written between 2016 and 2021, they were chosen for their pertinent information on the issues and are currently relevant, incorporating the results national studies, polls and Congressional issues, as well as local and they contain many relevant Rhode Island quotes.

Numerous references to agencies who can assist the aging reader, such as AARP (a wealth of information and resources!) and national departments and commissions to watch abound in the book.

You’ll find information from the very beginning of aging – what AARP defines as 50 – to the old-olds – and especially aging people taking care of other aging people, often their much older parents. Dealing with the stresses, how to reach out for help, and more, are literally on every page of this book.

We could fill our columns with this helpful information, but instead we dole out Weiss’ advice and savvy advocacy information weekly – the reactions to it have been fantastic.

Or, our favorite, especially if you know Herb and his lovely brown Lab, Molly, on the “Pets” chapter: From Anatole France, French poet: – “Until one has loved an animal, a part of one’s soul remains unawakened.”

For over 40 years, Herb Weiss has enjoyed a distinguished career in journalism, earning a national reputation as an expert on aging, health

care, and medical issues.  Over 800 articles that he has authored or co-authored have appeared in national, state and location newspapers and trade publications.

Weiss is a recipient of the 2003 AARP Rhode Island’s Vision Award for his weekly commentaries that appeared in the Pawtucket Times.  He is a two-time recipient (1994 and 1999) of the Washington, DC based American College of Health Care Administrator’s National Award for his coverage of long-term care issues.  He was also awarded the Distinguished Alumni’s Award by the Center for Studies in Aging, North Texas State University (now referred to as University of North Texas), in 1997, for his coverage of aging issues.  In 1997, he was selected by the prestigious McKnight’s LTC News to be one of its “100 Most Influential People” in long-term care.

In 2016, Governor Gina Raimondo appointed Weiss to the Rhode Island Advisory Commission on Aging. Weiss received a bachelor’s degree in psychology with a social work certificate from University of Texas in 1977. Later he received a master’s degree (gerontology) and a Specialist in Aging certificate in 1979 from North Texas State University.  He also completed 24 credits in a doctorate in public policy and aging program from the University of Maryland, Baltimore County. He was a licensed nursing home administrator in Washington, DC, from 1981 to 1987, and in Washington, DC, from 1993 to 1999. He is a graduate of Leadership RI, Class of 2012.

Like his first tome published (Taking Charge: Collected Stories on Aging Boldly) in Aug. 2016, his 317 page sequel released on Aug. 6, entitled Taking Charge: Vol 2  More Stories on Aging Boldly, includes well-researched  stories and insightful interviews with experts and everyday people who have shared their observations about growing old. The topics include, caregiving, travel, surviving COVID-19, improving health and finances, relationships, retirement, and leisure, to their thoughts about mental health, spirituality and death.

“Herb Weiss’s collection of 75 essays portrays how we can all age boldly. His book provides a refreshingly positive portrait of living longer. What is striking as you read each of his stories is that despite our culture’s general worship of youth, Herb’s “age beat” is a place that celebrates the increasing wisdom and experience that comes with longer lives. His writings offer the most human and best way of giving you the advice you need in a way you want – storytelling,” says Sarah Lenz Lock, senior vice president for Policy and Brain Health at AARP. Ms. Lock leads AARP’s policy initiatives, in the book’s forward.

The Pawtucket writer localizes these national research studies and polls in his  commentaries by quoting health care providers, state lawmakers and state officials, and Rhode Islanders. However, Weiss says that these stories provide insights that are universal and applicable anywhere in the nation.

In writing his books, Taking Charge, a 2-book collection, Weiss said the goal of aging is not to just grow older, but to take charge and age boldly! “I strongly believe that each one of us can share our own personal stories and life experiences that just might help others age boldly, live better, longer, and to age gracefully,” he says.

We love the short endorsements on the back cover of Weiss’s sequel, from well-known Rhode Islanders and national aging experts give their thumbs up and endorsement of this book. Specifically:

“Herb Weiss knocks it out of the ballpark with his book Taking Charge (Volume 2) which continues addressing the journey of aging smart as well as gracefully.  He shows how to be an educated consumer when making decisions that affect your financial, emotional and overall life throughout your golden years. Throughout his book, Weiss takes charge of your future independence and aims at keeping you informed and healthy! He is a walking, talking resource and is book is a credit to his well-researched seasoned columns over the years.”
– Robyn Spizman, Media Personality and Author of Loving Out Loud; The Power of a Kind Word (New World Library, 2019)

“Herb gives us a great gift in his anthology of insights on the many issues of an aging society–from caregiving to mental health to travel and leisure–all you need to know about understanding, appreciating and benefiting from longevity are found in his revelations and assessment of the complex and fascinating issues of growing old in America. Kudos to this Volume 2 of “his greatest hits.”  – Fernando Torres-Gil,  Former U.S. Assistant Secretary on Aging, and UCLA Professor

“Taking Charge” (Volume 2) provides a hearty serving of food for thought from an eclectic menu of aging issues. Author Herb Weiss takes great care to give readers a straight-forward examination of timely topics such as Caregiving, Social Security and Healthcare. Each section incorporates expert commentary and analysis from very credible sources. “Taking Charge” is a worthwhile read and should be shared with friends and colleagues.” – Max Richtman, President and CEO, National Committee to Preserve Social Security & Medicare

“The wit and wisdom of Weiss shines in this second collection of his columns and commentary on the aging experience. Through his vast experience and his keen insight Herb brings a wealth of enjoyment to this examination of truths told in stories of real life people. For Herb Weiss the choice is clear—age boldly. Don’t miss this book.”  – Kathleen Connell, Former Secretary of State of RI, Former State Director of AARP-RI

“This 2nd book on Aging Boldly by Herb Weiss does not disappoint. The vignettes offer a reality check on aging and are refreshingly optimistic.  Weiss’ topics are multidisciplinary and have authenticity and clarity. The myriad of topics provides interesting and practical knowledge on aging for both health professionals and the general public.”– Janet Cogliano, PhD, retired RN Educator and Clinician

If you  are thinking of that holiday gift giving, send Herb an email via his site and he’ll be more than willing to sign a book or books for your gift giving. Professionals working in the field – accountants, physicians, assisted living professionals, and many more – think about giving this 2-volume set – and don’t think about all those ships sitting in the ocean.

Taking Charge was published by Stillwater River Publications. Support a Rhode Island author and a Rhode Island publisher. And – do what we all must do – age – boldly!

Look for Herb Weiss’ column in RINewsToday – usually on Mondays and whenever Washington, D.C. actions inspire.