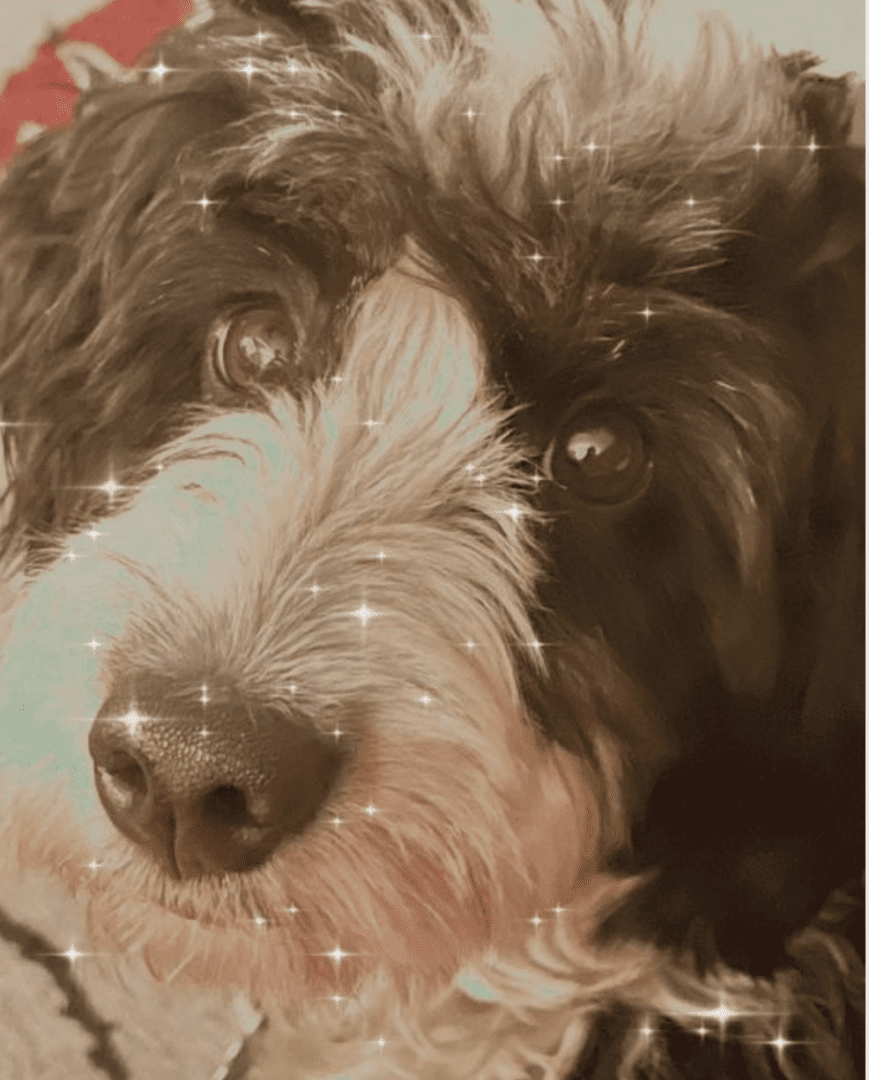 GriefSPEAK: As told by Mercy – Interpreted by Mari Nardolillo Dias

It’s true. We dogs grieve all of the same emotions that go along with grief when we lose a human or a furry friend. In her book, “How Animals Grieve” (2003) Barbara J. King says that humans “can’t understand how [animals] think about death… but we will react with changes in our behavior.” King says that when I lose my human, or one of my cousins, I will withdraw, and I might refuse to eat or drink and maybe go looking for them.

Mom told me that the dogs she had before me were Ruben and Cooper. Cooper was the older of the two, and Ruben never knew a life without Cooper. One day, as Cooper was lying outside under his favorite tree, it began to rain. Mom went outside to call Cooper in. He didn’t respond. When she went out by the tree to coerce him to come in out of the rain, she noticed he was dead. She sobbed and cried. Cooper was buried under his favorite tree, in the exact spot where he passed.

When Ruben came home, he looked all over for Cooper. He began to whimper and run throughout the house. He wouldn’t eat or sleep that night and the next morning when he went out in the yard, he sniffed and ran to the newly formed mound under the tree. He began to whimper and run in circles, and finally sat atop the mound and wailed. All day. Every morning. Like a sentinel, he stood still and alert and continued to howl.

That’s what I think Barbara King means! We know. Dr. Marc Bekoff, author of the 2018 book “Canine Confidential- Why Dogs Do What They Do”, tells us all about the symptoms of grief in dogs. He even said “Calling out or vocalizing in an unusual way for the dog who has passed away and searching for the companion dog. “Just like Ruben! Bekoff also says that we can get very clingy to our humans when we are grieving. I’m only a 6-month-old mini bernedoodle, but I know I get clingy, even when Mom leaves me for an hour. She makes me feel safe. She says I make her feel safe, too.

When Ruben got older, he couldn’t walk. Steroids helped him have a little piece of independence and normalcy. But for just a little while.  Mom explained to me that dogs need to have dignity at the end of their life. Just like people. On the day he was to be euthanized Mom carried him into her car and took him for a ride. She said he loved to ride with the top down (I do, too!). Then they stopped at the beach. Swimming was his favorite activity! She picked him up and carried him out of the car and down the path to the shore (which she said wasn’t easy because he was an 80 lb. Lab). It was low tide, so she carried him out quite far until he couldn’t touch the bottom. And let him go. The buoyancy of the salt water and the weightlessness we feel in water was just enough for him to swim. And swim he did. He swam laps horizontally, back and forth, back and forth. Mom said he was “in his glory”, and it was a great memory and experience for him to have before he died.

I sit with mom’s clients who are grieving. I can feel their sadness, and I just want to jump on their laps and lick them. Try to make them feel better. If I am well behaved during Mom’s therapy sessions, she takes me to the dog park. It is my favorite place in my world! (As long as I can see mom). I have so many friends there. I worry because some of them are old and frail and move very slow. Sometimes I get frustrated because I’m a bit impatient. I tell them:

“Let’s go get the ball!” And I run and run and run. But they are still sitting and watching. Of course, there are a lot of dogs that are my size and a little bit older than me. We run until we can’t anymore, when our tongues are hanging out from exhaustion and heat, and then we sit in the shade under a tree and just chat for a bit. Sometimes we gossip – mostly about the other dogs, but sometimes about the humans.

We dogs form an emotional attachment to humans and other dogs. We grieve based on the relationships we have. We are really smart you know. We can sense your mood, facial expressions, and even read your posture. We can read the differences in us and when you’re grieving, we can feel it and sometimes experience it, too.

I know I will grieve my pals at the dog park. I will be sad for the older dogs, but I don’t have a close relationship with them.

Mom said she read that it’s okay to try to cheer me up when I’m sad or grieving, even if it’s for her clients. That’s when I go the ice cream store and get treated to a doggie sundae. The vet told mom that there is antidepressant medication for me or any other dogs who are grieving so much that we stop eating and drinking ‘cuz that’s not healthy.

Believe me, I am not a narcissist, but I must admit I’m very cute and lovable. Clients who are sad and grieving say I’m like a comfy teddy bear. I know teddy bears make people and children feel safe, too. Mom said she named me “Mercy” because she believes that everyone deserves forgiveness and permission for their feelings. When I was born in Utah, I had no idea what my future would be. I went from my dog mom to a home in Philadelphia, but they told me it was temporary. Then one day they said –

“You are moving to Rhode Island. Your human’s name is Mari. She has been waiting for you for a long time. This is your forever home.”

I hope when my time comes, Mom carries me like she did for Ruben. That would be a great memory and experience for me. To die in mom’s arms at the dog park – “in my glory’.