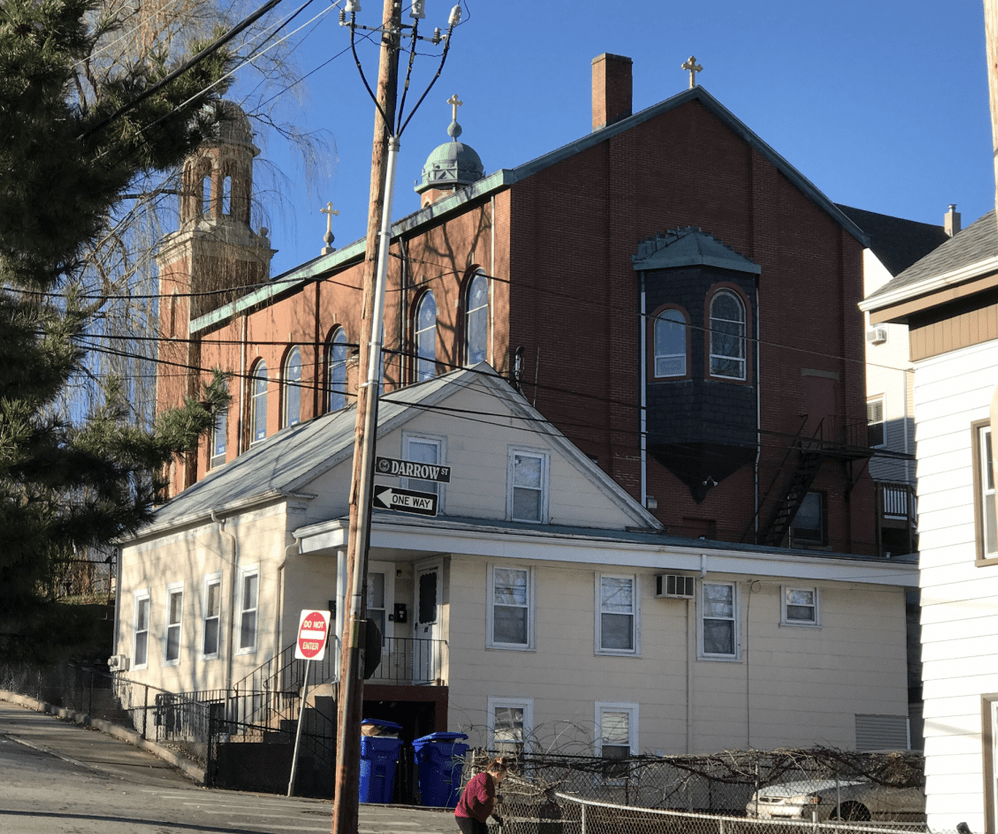 Frank Lloyd Wright would be 155 years old if he were alive on this June 8 date of his birth. A hundred and fifty years ago he spent the age of five in Pawtucket, where for a year his family lived at 12 Blackstone Ave., a block west of the river of the same name. It was not a happy family life for the boy, who nevertheless would become America’s most celebrated architect.

A crowded city of immigrants and textile mills north of Providence, the state capital, Pawtucket was at the height of its industrial growth and prosperity (ditto Central Falls, where the family also spent a brief sojourn in 1871), when itinerant Baptist minister William C. Wright moved his family, after his second marriage, from his son’s birthplace in Wisconsin to New England. Bleyer still seeks to track down the house the Wrights rented in Central Falls.

Young Frank’s year at 12 Blackstone in 1872-3 must have been hairy. His mother was cruel to the children of her new husband. Frank defended her over his father, a relatively gentle and civilized man, a musician and philosopher. The switch in Frank’s attitudes toward his father and mother aligns with his lifelong tendency to fudge the truth, and was carried on by the great man until his death in 1959.

So the house that Frank lived in at age five has all the makings of a tourist attraction in haunted-house-rich Rhode Island. Chris Bleyer would like to rent or own 12 Blackstone, and seeks to partner with a fully credentialed architect who might join him in envisioning how the Wright connection could benefit their practice – and perhaps the city of Pawtucket as well.

The 13th state is rich in history, and its history is rich in lore, real and imaginary. Today that lore finds many outlets for the entertainment and edification of the traveling public, and those of us who live here. Here are just a few examples:

The famous Conjuring House, in Burrillville, known for the  2013 film “The Conjuring,” based on a true story, just sold for over $1.5 million to a developer who plans to open it to tourists interested in paranormal abnormalities. Other houses include several either occupied or described by famed R.I. horror writer H.P. Lovecraft; the house on Providence’s Benefit Street where Edgar Allan Poe met his beloved Helen Whitman, who broke off their betrothal after failing to stop his habitual drinking; not to mention the Athenaeum, also on Benefit, where the pair allegedly canoodled among the stacks. Scary thought, eh?

Nearby on South Main Street is the lot, now dedicated to parking, where stood the Sabin Tavern, built in 1763, where Rhode Island colonists met on June 9, 1772 (250th anniversary upcoming!), to plan an assault on the British tax cutter Gaspee. Setting it ablaze was the first act of resistance leading to the Revolution, not the Boston Tea Party in 1775. Before the tavern’s demolition in 1891, the tap room was relocated and attached to the east end of the Mary Arnold Talbot House at 209 Williams St., also in Providence.

The restaurateur Robert Burke, a newly minted member of the R.I. Hall of Fame, should consider putting the tap room back after rebuilding the old tavern itself on its original South Main site or on riverfront land a block or so away. The buildings being erected under the auspices of the I-195 Redevelopment District Commission are houses of horror on the riverfront. Frightful, yes, but the wrong kind of frightful from a touristic standpoint. The commission’s education seems to have progressed no further than the urban renewal that could have destroyed Providence and did destroy Pawtucket.

Not all of these examples are of haunted houses but all do suggest a direction that Bleyer and his eventual partner might take. He has imagined replacing the plain column on the porch of 12 Blackstone with a column replicating FLW’s Johnson Wax building’s grotesquely flared interior columns, built in 1936 after Wright had drunk the modernist Kool-Aid. Bleyer has had pushback on this idea. That is not the FLW who should be celebrated! More sensible would be an effort to restore the exterior of the house to its appearance when FLW lived there.

His stepsister’s autobiography tells a scary tale of one winter’s eve:

I remember one time in the winter when Mother was in one of her tantrums, she got mad about something and as usual vented it on me; she jumped up and down and pumped water as fast as she could and threw it over me and yelled with every jump. Father had his study on the third floor but he heard the racket, and came down to see what was up. He told me to go upstairs but I was afraid to go past her to the stairway and my clothes were dripping wet, but I slipped out the front door and went around to the back and up the outside stairs. My clothes froze on me before I could get in the house.

Brrr! Haunted house indeed! Then again, FLW’s career in architecture, much of it not as frightful as his stepsister’s experiences of stepmotherly cruelty, should play a role in reviving his boyhood home.

Of course, restoring it might be expensive, but perhaps the city could help. Pawtucket has much glorious architecture from its years of prosperity, but the city declined (what a coincidence!) as modern architecture and urban renewal ripped much of the city’s historic fabric and isolated its remaining treasures.

Many plans to revitalize Pawtucket have come and gone this past half century with little progress to show. Remember the PawSox, anyone? Perhaps, instead of an overpriced new soccer stadium, a bit-by-bit effort to rebuild ugly parts of the “modernized” downtown, resuscitate the city’s preservation institutions, and restore historical fabric such as the 12 Blackstone St. house of FLW would be more financially practical and more broadly successful.

Possibly, listing Frank Lloyd Wright’s boyhood home among the Ocean State’s vaunted haunted history, perhaps under the direction of architectural sleuth Chris Bleyer, could be one means toward that end.

To read David Brussat’s blog, Architecture Here and There: https://architecturehereandthere.com