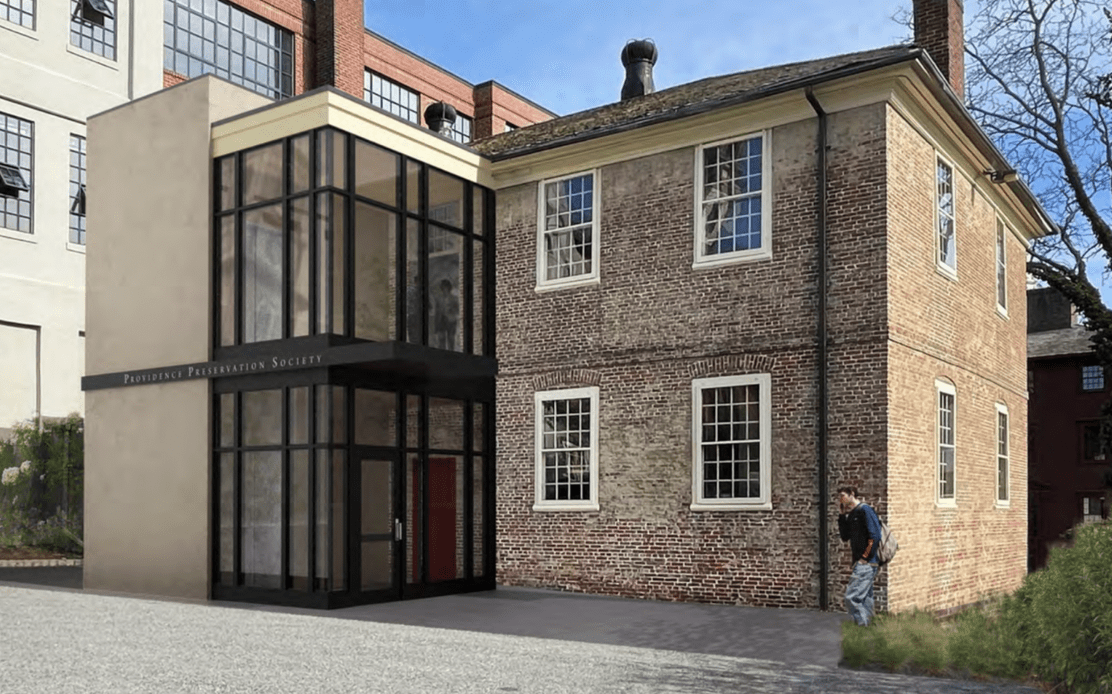 I drove up downtown’s beautiful Westminster Street yesterday and saw director Brent Runyon of the Providence Preservation Society sitting outdoors at a café around noon. I wanted to scream at him:

“WTF are you guys doing!”

PPS plans to add a modernist glass addition (see illustration above) to the rear of the dear Old Brick School House, on Meeting Street, one of the earliest surviving brick school houses in America. It was built in 1769, and now serves as the society’s headquarters. A glass-and-steel addition on its own headquarters? Doesn’t PPS know its business? It is a historic preservation organization!

This is sacrilege. I hereby tender my resignation as a member of PPS.

That the addition would deface only the rear of the building is no excuse. The rear of the building is visible from Old Court Street as you drive uphill from North Main or downhill from Benefit Street. You will see it as you pass by the original Rhode Island state house, built in 1762. In fact, the first state house was originally built in 1730 on the site of what is now the Old Brick School House.

The society does much good work, has done so since its creation in 1956. The city would be far worse without it. But the city would be far better if the society knew how to do its own job. No preservation organization in America really understands or accepts that the popular movement for historic preservation arose because citizens nationwide feared that modern architecture would invade their neighborhoods, threaten their home values and dilute the beauty of the sacred historical precincts of their cities. That fear is valid more than ever today.

If the dues-paying membership of preservation organizations were aware of what the staff and boards of their organizations believe, they would do what I’ve done today – resign. If enough members of PPS and its sister organizations did the same, it would force preservation boards to come to their senses, do what members want them to do, and tell their staff to shape up or ship out.

To read David Brussat’s blog, Architecture Here and There: https://architecturehereandthere.com