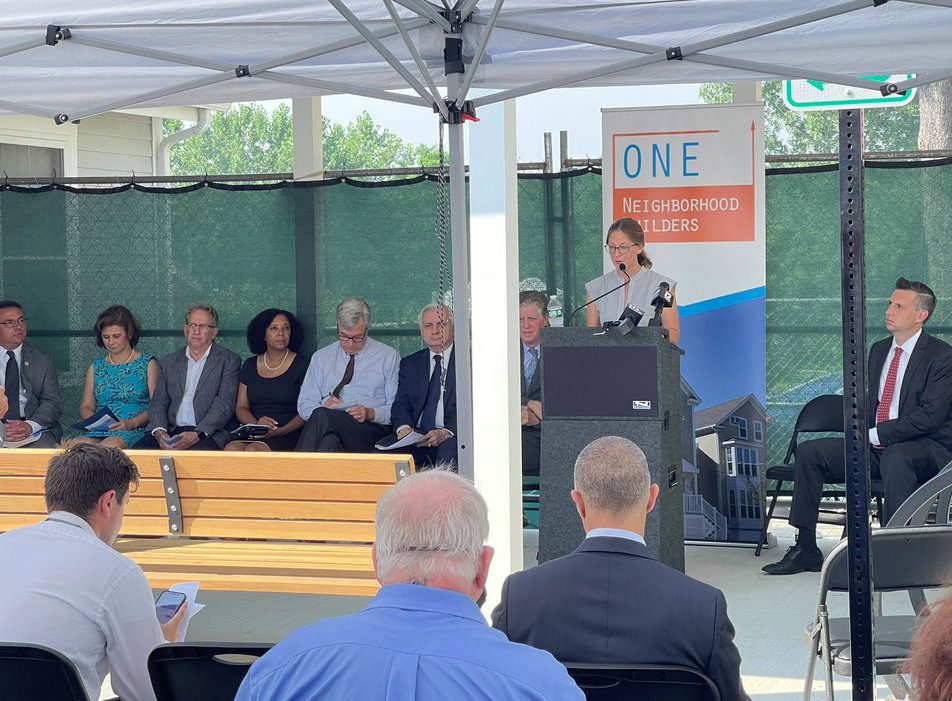 As someone who has become increasingly disabled, struggling to walk, dependent on the use of trekking poles to get around, I have begun to perceive that I am becoming invisible, in the Ralph Ellison sense of the word, which is still a difficult concept for me to wrap my head around.

In part, it is because I am broad-shouldered; I was once infamous for setting immovable picks on the basketball court, making it difficult for defenders to get around me, allowing the jump shooters on my team to hoist up shots unimpeded.

When I attended the ribbon cutting celebration for the two affordable housing projects by ONE Neighborhood Builders on Monday morning, July 26, I found myself unprepared for all the different ways that I felt I had effectively become invisible to others. [See link below to ConvergenceRI story, “Investing in neighborhoods and residents.”]

Perhaps I was still a bit sensitive, call it an emotional hangover, as a result of my experience with HHS Secretary Xavier Becerra at the gathering at the Blackstone Valley Community Health Care facility in Central Falls on Friday, July 16, when he had challenged my media credentials in public, apparently thinking that I was not a member of the news media because I had not joined the media scrum near the podium. [See link below to ConvergenceRI story, “Through the lens of disability.”] I have written to Secretary Becerra but have not yet received any response.

An obstacle course
To get to the staging area for the ONE Neighborhood news conference, it required walking up a flight of stairs, walking through an apartment, walking cautiously down steps, then traversing an uphill grade to find a seat in several rows of chairs that had been arranged in a parking area bordered by a deep-cut curb.

The question:Why were such news conferences not made handicapped accessible?

Translated, four of the potential Democratic candidates running in the 2022 Governor’s race were sharing the stage: Elorza, Gorbea, McKee, and Magaziner. What brought them together was an affordable housing success story, more than three years in the making, working at a speed that Jennifer Hawkins, executive director of ONE Neighborhood Builders, called “lightning fast.”

Observation: All of the elected officials speaking as part of the program were polite and deferential to each other. Yet, two days later, in a kind of calculated street theater, Mayor Elorza would stage a public confrontation with Gov. McKee at the news conference to announce the upcoming schedule for WaterFire lightings, calling the Governor a coward in a heated disagreement over the Providence public schools’ teachers contract, which was ratified overwhelmingly on Friday, July 30.

The question:Why didn’t Mayor Elorza raise his objections at the Monday news conference, if he felt that strongly?

Observation: I was the only person, as far as I could discern, among the nearly 100 attendees at the ribbon-cutting celebration, including all of the elected officials, wearing a mask. While I am fully vaccinated, wearing a mask is a necessity, given that I am receiving infusion treatments that lower my immunity.

The question:When will elected officials in Rhode Island return to wearing masks in public?

Observation: One person who did not receive any credit during the proceedings was Frank Shea, the long-time executive director of ONE Neighborhood Builders, upon whose shoulders much of the success of the community development corporation had been built. Nicolas Retsinas, chair of Rhode Island Housing’s board of commissioners, was in attendance and was saluted from the stage.

The question:Why is there such a dearth of knowledge about the history of the numerous pioneers in Rhode Island who helped create the groundwork for affordable housing in communities across the state?

Observation: There was a representative from the William D’Abate School who was astonished to learn that her school, in 1994, had been home to the first Child Opportunity Zone in Rhode Island, an event championed on the front page of The Providence Journal at the time, with the headline, “We are ahead of the nation.”

The question:Despite in-depth reporting by Rick Schwartz in ConvergenceRI about the history of Child Opportunity Zones, why is there such a disconnect about the efforts to create school-based wrap-around services for students and parents in Rhode Island?

Observation: To drive home the concept of how the two affordable housing projects had restored neglected parcels and reconnected neighborhoods, dignitaries had been encouraged to walk between the two projects, some 300 yards apart, as a kind of impromptu walking tour after the ribbon-cutting ceremony.

The question:Is there a digital mapping program that could link all the affordable housing projects created in Rhode Island during the last 25 years?

To read the entire article: http://newsletter.convergenceri.com/stories/ways-of-seeing-and-not-seeing,6693