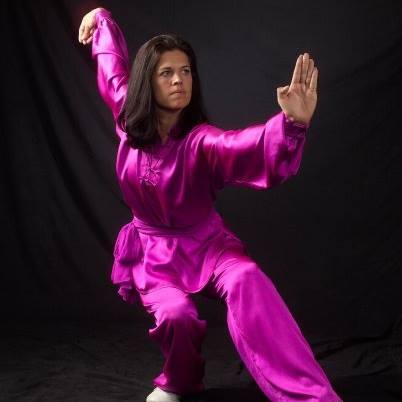 From a shy girl to a World Karate Champion, for Christine Bannon-Rodrigues, dreams do come true!

It is hard to imagine that at 13 years old Christine Bannon-Rodrigues was a “shy, quiet and a bit of an introvert” living in the Buttonwoods section of Warwick, when she discovered a karate school near her home that would change the rest of her life. “I wasn’t much of a joiner, but the Karate school sounded like something that I would enjoy trying. The school had always been there but because it had no signs it just blended in. She learned that her friend’s brother was taking lessons, so she and her friend decided to take lessons as well.” said Bannon- Rodrigues. There she met the man who would change the direction of her life, Don Rodrigues, he became her teacher/instructor, her mentor and friend and her future husband. “When I began to study Karate, I wasn’t very good, but I liked discipline and peace of mind that it provided. I began to fall in love with the sport. I received my back belt in Oki-ryu (a form of Kenpo, Washu) at 17 years old, by that time I was totally hooked!”

She became so hooked that 40 years later she has become a 9 Time World Karate Champion, that is in the entire world! She has appeared as a stunt double in movies and television shows and has her S.A.G. card to prove it. She became a model, a cover girl on countless magazines the subject of many interviews in both the print and news media. She has professional endorsements and has traveled all over the world to compete, to do exhibitions, to judge professional matches, appear in movies and make special appearances as a good will ambassador for the sport that has given her so much. This all began when a shy 13-year-old girl was brave enough to walk into the karate studio that was down the street.

As she advanced through the many stages of color belts to get to her goal of black, Christine’s confidence grew, and she began emerging from her shy little girl to a confident young woman. So much so that while attending Warwick Vets high school she requested the administration to have Don Rodrigues (a Grand Master and a 10th degree black belt himself), be granted special teaching status so he would be able to come into the school and further instruct her in her quest to achieve her black belt during gym class, which was granted. “It wasn’t uncommon for girls at that time not to participate in gym class they reached the end of their high school years.  Most were required to do the minimum to get the required passing grade to graduate.” Rodrigues said, “I didn’t want to waste any second that could get me to my goal of achieving my black belt and Don was willing to help me by coming in and instructing me, in a class of one. She was totally hooked on the sport and committed herself to going has high as she could, to advance to the highest level the sport would take her and along the way after Don’s marriage broke apart she and her teacher grew closer until they fell in love and eventually married. They have two children Dante, 22, a black belt, who currently owns his own studio and is working on a production for NETFLIX and Niko, 18 who is a brown belt.

Christine’s career took off when participating in the 1991 World Association of Karate and Kickboxing Organizations games, she earned several world records, including having been the only person (man or woman) in history ever to win three World titles in a single event and accomplishment she repeated again in 1993. Christine has traveled all over the world to compete in competitions, to do exhibitions, winning over 100 major National and International Karate tournaments. To her credit Christine has won over 1,000 trophies in her career including 100 Grand Championships, and a World record of 9 World titles.

For most athletes those accomplishments may have been enough, but not for Bannon-Rodrigues in addition to World Champion, Instructor, wife, mother and mentor. Christine has appeared in several motion picture and television projects. In 1994 she was the stunt double for Hillary Swank in The Next Karate Kid movie, the stunt double for Alicia Silverstone in the Batman and Robin feature film. In 1996 she was cast as Lady Lighting in the WMAC Masters movie. Her credits also include 2004’s Sci-Fighter playing Virus, a bridesmaid in 27 Dresses, and in Underdog the movie. She was the choreographer for Champions of the Deep and appeared as herself in the production of The Real Mr. Miyagi (who ironically Pat Morita who plays Mr. Miyagi in the Karate Kid franchise is from New York has little martial arts skills).

When asked what she’s been doing since she stopped competing Bannon-Rodrigues said, “I travel through the USA coaching the competitive team Macho, I continue to participate in exhibitions and travel as a judge on competitions. I feel that I could still compete on a high level she said even though I have had double hip replacement surgery in 2016, which is one of the down sides of the sport. I am at 100% and I wouldn’t rule out a return to competition.” She goes on to say, “I still enjoy teaching and working at the Don Rodrigues Karate studio that she co-owns with her husband.” She is the co-producer and promoter of the Ocean State Grand Nationals that are held annually in April in her home state of Rhode Island. In addition to being involved with the school, she is involved with NASKA (the North American Sports Karate Association), she is a columnist for various publications and continues to get requests for guest appearances for various events.

When talking/interviewing Bannon-Rodrigues, it dawned on me that she doesn’t flaunt her celebrity status, you can tell that she appreciates it and is deeply thankful for it. She embraces her achievements but doesn’t make it a point to point them out. Christine is quite and confident, she is very approachable to everyone. During her interview she was very pleasant and patient to questions that she most likely had been ask a hundred times before. Christine Bannon-Rodrigues is a true Rhode Island treasure and she didn’t get there by taking the easy road!  What an amazing journey it has been for that shy girl from the Buttonwoods section of Warwick, RI who thought that she would like to try Karate when a studio happened to be located down the street.