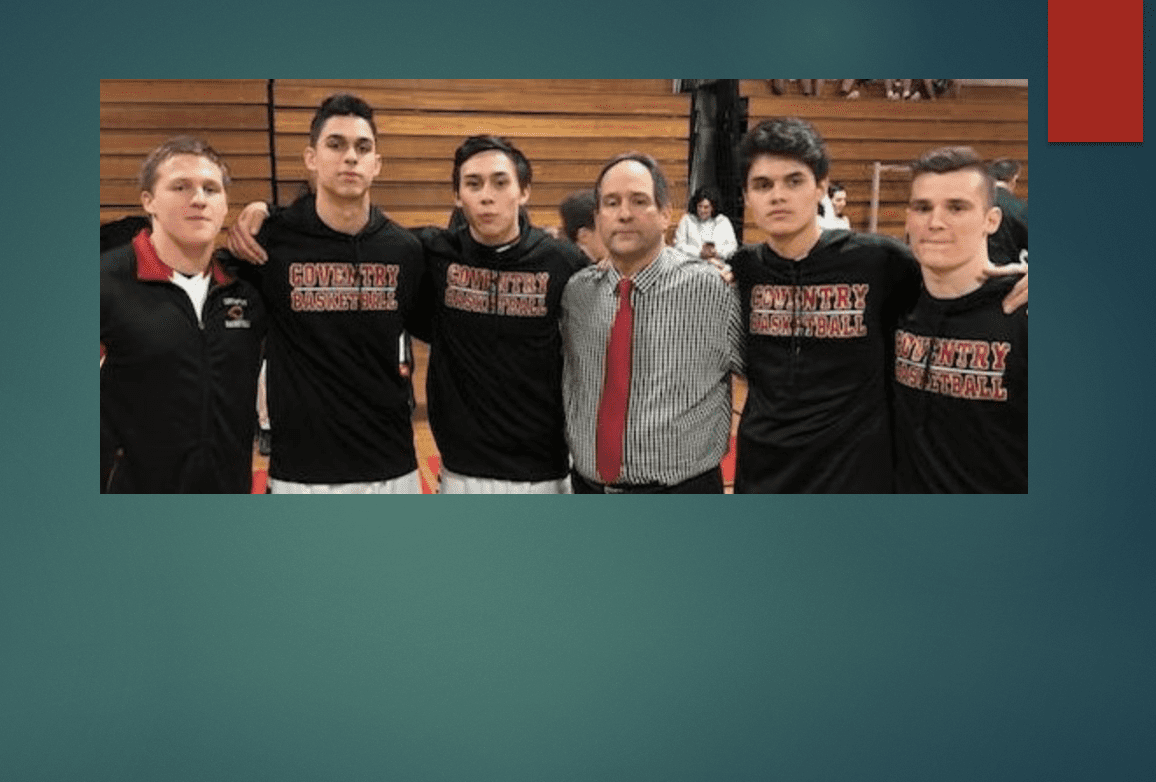 The journey that led Coach Jim Moretti to the top spot of the Division II Coventry Oakers has been, as they say, a long and winding road. In the beginning the 1975 graduate of Cranston West had an idea about where he wanted to be in the coaching ranks. As a baseball player for the Falcons and a player on the basketball team, Moretti always saw the game on the hardwood as an analytical chess match with his opponents. His counter moves to their counter moves; this strategy served him well when he decided to coach basketball.

Moretti realized that to get into coaching and move up the ranks to the head coach position he had to start somewhere, so it was in the late 1970’s, at the urging of his friend, Jay DeCristofaro, Moretti began in the Cranston Recreation’s Saturday Morning basketball program. “It was a program where small children began playing basketball in November. We would instruct them over the winter and the last month, which was late February into March, the 5 participating school all over the city would travel and play each other in games,” Moretti said. “This showed the kids what all the hard work and drills were all about. But it was my real first taste of head coach competition.”  It was also at this level Moretti would cultivate his signature defense, the 1-3-1, which he used throughout his career and still does to this day.

The next step for Moretti was going to the youth level CLCF basketball program. Having several successful years at CLCF, Moretti caught the eye of then head coach of Cranston East, Jim Hopkins. Hopkins encouraged Moretti to join his coaching staff and learn the game at the next level. “It was hard for me to wrap my head around going to coach at Cranston East, seeing that I am a Cranston West Falcon through and through!” he said, “but the opportunity was too great, and Jimmy Hopkins was a bit of a legend, and I knew that I could learn a great deal from him.” After two successful years Hopkins retired and encouraged Moretti to apply for the position. Moretti was by-passed for another candidate. Not happy, Moretti didn’t know what he was going to do. But like the old saying goes, when one door closes, another door opens. Moretti landed as the head basketball coach at none other than his old high school – Cranston West!

The next 25 years Moretti bult one of the best high school basketball programs in the state of Rhode Island, with players like Bryan Yarce and Matt Fontaine laying the foundation for the success of the program. The Falcons beat out division I powerhouse Central to win their first State Championship. In 1991 & 1992 Cranston won back-to-back Division II championships by beating Woonsocket and Tolman. Over his 25 years at the helm of Cranston West, Moretti’s teams always competed at every level they played. Going from Division I to Division II and back and forth several times. “It’s the nature of the beast” he said, “for a public school, it seems that the talent development rotates every 4 to 5 years. Some years you get bumped up and then dropped back down. But you learn to deal with it and go with the flow!” It was in 2014 that things changed for him at Cranston West. Unreal expectations of the team’s performance were not met by the parent group, and as is the case, the blame was laid at the feet of the head coach and his staff. It was after a few years of this blame game, when Moretti thought that it was time to step down and take some much overdue time off to be with his wife and children. So, leaving Cranston West with a 360-261 record and three championships, this end of what was one of Cranston’s greatest coaching success stories ever in the high school basketball books – or was it?

The season was quickly coming around, but instead of having some off time, fate stepped in. As word of Moretti being free worked its way around the high school basketball community, Chuck Jones who was the Athletic Director of Coventry High school, and a friend of Moretti’s and the basketball head coach Tom Campbell had other ideas. They approached Moretti and pitched him the idea of joining the staff of the Oakers. “When I was approached about the position on the staff, I wasn’t sure if I wanted to jump back into the situation. Then I said to myself, “who are you kidding?” Moretti accepted an unpaid, volunteer assistant coaching position on the Oakers staff. It was kind of a “Back to the Future” moment for Moretti, but he was excited to be back in the game.

Moretti was the Coventry assistant coach from 2015 to 2017 and the team was making “inroads” to the top of their division. In the off season of 2017, head coach Tom Campbell stepped down as the coach and Moretti was elevated to the top position. Coventry made it into the division I play-offs each of his first two years in DI. Then the Rhode Island Interscholastic League realigned the divisions, as they do every two years, and Coventry found themselves in division II. Being in division II didn’t mean that his team wouldn’t play against the division I teams, and one of his first wins was a cross over overtime contest a division I Central team at the PCTA Center in Providence. After falling behind early in the game by double digits, Coventry clawed back to tie the game and force overtime. In the overtime session Coventry turned things around and beat Central by double digits. The statement was made after that game, Coventry was ready to play anybody at anytime and they were not going to be pushed around any longer! Coventry has made the playoffs every year since Moretti has taken over the program.

As fate would have it, in the cold of winter 2022, Moretti’s Coventry team was ready to play his old team, the Cranston West Falcons, who was now being coached by Moretti’s former player Matt Fontaine who left Pilgrim high school to head coach his old team, just like Moretti did 30 years before. But on this evening things were a little different, the fact that Moretti’s Coventry had become a force to reckon with, or was the teacher verses the student. What made this evening different was the fact that Moretti was going for his 400th win as a head coach. A career milestone that not many head coaches in any sport has had the opportunity to achieve. It seemed that the planets aligned perfectly, and at the end of the game, Coventry gave their coach his 400th win over his former team and as they embraced at mid-court nobody was happier for Moretti than Fontaine who said, “If I has to lose a game to a coach for his 400th win, I am glad it was to Jimmy!”

Sitting down for this interview, it was apparent that old spark is still there. The drive that pushed him to compete on the court as a player, and as a young coach in the recreation and CLCF level hasn’t gone away. As he remembered the past years at Cranston West, it was apparently clear that he is far from being done, in fact the message was that he was just beginning. His competitive fire was still burning strong!

This elder statesman of high school boys’ basketball wasn’t riding off into the high school basketball abyss. His intention is to make the Coventry boys basketball program one of the best programs the state has ever seen and no game against his team will be an easy game no matter who the opponent is, because for Moretti getting the 400th win was nice but his current record stands at 410 wins and 318 loses, can you say 500? Coventry certainly hopes so!