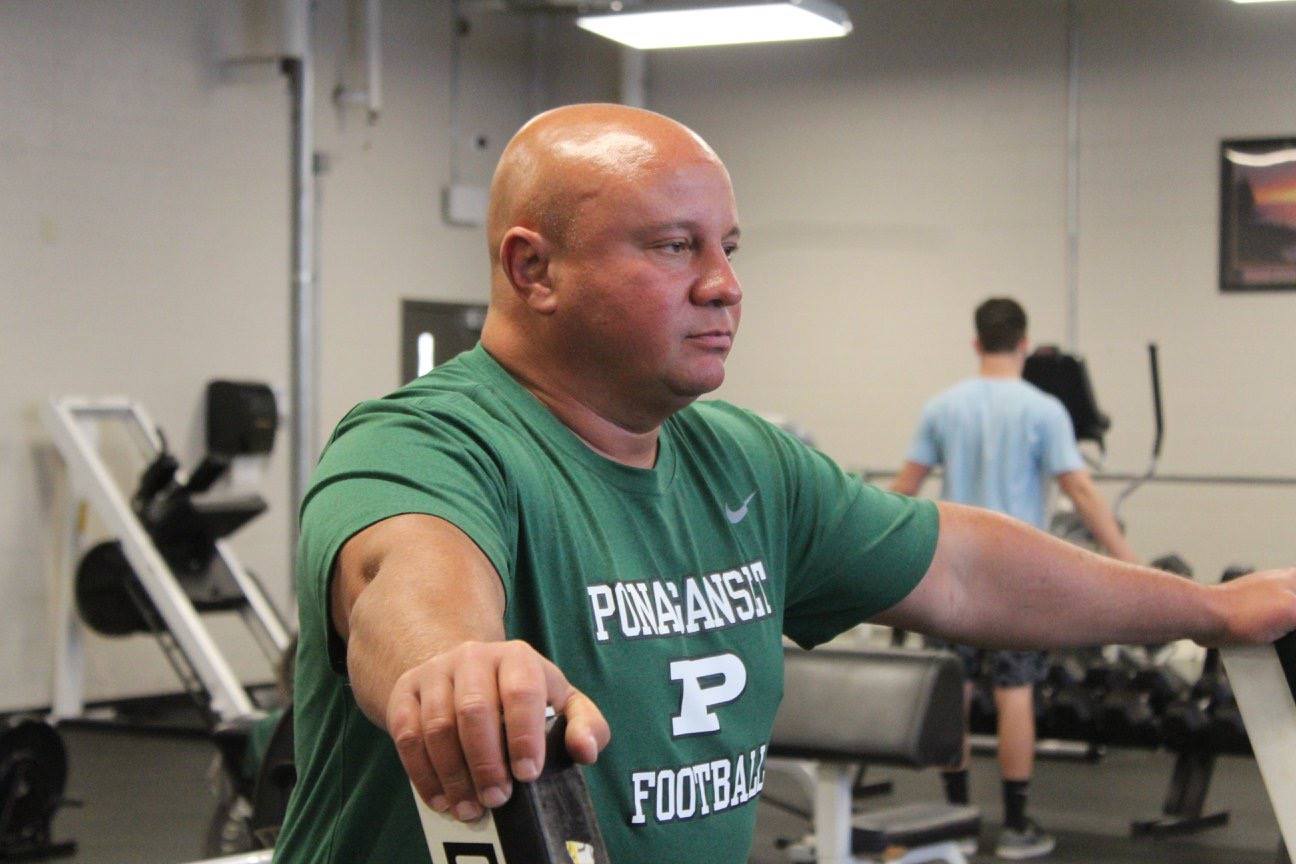 Cooking up success – For Ponaganset football head coach, Jim Cook, it is business as usual for the upcoming 2020 season.

The Covid-19 virus has redefined the world of sports as we knew them. For those involved in all sports the new rules will make coaches’ jobs a little more difficult as they navigate to keep players and staff safe as they compete in the “new normal” football will be one of the hardest sports to apply these new rules to. Time will tell how the coaches will adjust and carry on with the upcoming season.

For Ponaganset head football coach, Jim Cook, there was never any doubt that the sport of football was going to be taking up a huge part of his life. The journey began when at 8 years old he signed up to play for Cranston’s C.L.C.F. (Cranston League for Cranston’s Future) Chiefs. “I was inspired to try the sport out by my Uncle Arthur.” His Uncle Arthur was Arthur Jordan, who played Center for Cranston East from 1972 to 1974, a team that went on to win two titles and was named on back to back 1st team All State in 1974 & 1975. “He would get all of the kids together and we would have games between us. To say things became extremely competitive would be an understatement.” Cook said. The fire was lit, and as Jim entered Cranston East, there was little doubt that both football and wrestling were going to be his sports of choice, just like his uncle.

As Cook began a career as an electrician, he also started his career on the coaching side of the sport in 1994, starting where? – the Edgewood Eagles, before heading over to the C.L.C.F. Chiefs, and coming full circle. Jim’s passion for coaching did not end with C.L.C.F. He began climbing up the coaching ladder as a position coach and specialty coach refining his coaching skills along the way, as it is for many young coaches, Jim made stops at Bishop Hendricken and Tollgate but in 1996 Jim became the head coach of the Cranston East freshman team where he remained until 1998.

Jim was known throughout the state as a hard worker and a stickler for details.  He was asked to join the staff of the Pilgrim Patriots, then a couple of years later, Jim became the defensive coordinator of the same Ponaganset Chieftains that he would become the head coach of a few years later. In 2014 the head coach of Smithfield High offered Cook a spot on his staff where Jim became both the offensive and defensive coordinator for the Sentinels over the next three years. “Although I was pretty confident in my ability on both sides of the ball, I still learned a lot about the inner workings of the high school game.” Cook was offered the assistant head coaching position in 2017 with Johnston High.

After a season on the Panthers sideline, Cook was encouraged to apply for the newly open head coaching position with Ponaganset High school. The Chieftains played in the Rhode Island Interscholastic Leagues Division 4 which is based on a formula of past seasons records, geographic location, and school enrollment, but for Cook landing as the Chieftains head coach was his dream job. “I had always wanted to lead my own program, and I picked up a lot along the way, when the Ponaganset position opened up, I felt totally confident in my ability to head up and build a competitive program.”

He found in his first season that he had to change the teams’ culture and mindset. “My first year we had only 25 players dressed, but those 25 kids played hard and finished the season at 6-4-0. We made the play-offs losing in the semifinals. But we laid the cornerstone, and it was cool again to play on the football team again.”  That first year with the number of players going for the team Cook and his coaching staff that consisted of 10, started to show up during the school day and handed out flyers and spoke to potential players, encouraging and answering any and all questions the players had. The strategy worked, and his 2nd year the Chieftains had between 40 to 50 kids try out and make the team in 2019. The culture was changed, and a program began. The team went 6-3-0 and once again went into the playoffs losing in the D-4 semi-final.

The 2020 season was looking good as the team began its off-season workouts, 45 players made up the roster lead by junior running back Marcus Carpenter. The RIIL realigned the D-4 conference which consisted of Tollgate, North Providence, Narragansett, Hope, Scituate, Davies, EWG/Prout co-op, and Smithfield. “Excitement was building, and we were going full speed ahead until mid-March when the Covid-19 virus brought everything to sudden stop. “When this crisis hit, we had no idea that it would put the fall season in jeopardy. As the end of the winter season stopped and as we watched the spring season get shut down, we thought that no way would this virus threaten the fall sports season!” But it has, with schools shutting down and going to virtual learning, the off-season conditioning program stopped and left the players on their own to train and condition while self-quarantining.

The RIIL has already cancelled the popular summer passing league (which is similar to a flag football league with no contact), all off-season camps and they also cancelled the Injury Fund game that is held the week before the season is about to Kick-off.

As the RIIL seeks guidance from the Governor and the experts at the CDC on how the best and safest way is to proceed with all sports going into the future. The contact sports prove to be more difficult. “On every play there is contact with other players and setting up the procedures without altering the game is going to be a challenge to say the least,” Cook said. But, he adds, “I do believe that they will come up with a way to make it happen so the season will be played, and measures will be in place to limit the risk to the players, officials, coaches, and fans.” So, for the time being, Jim Cook, his staff and his team waits for the green light and when they get it they plan to make their faithful forget about Corona and remember the Chieftains!