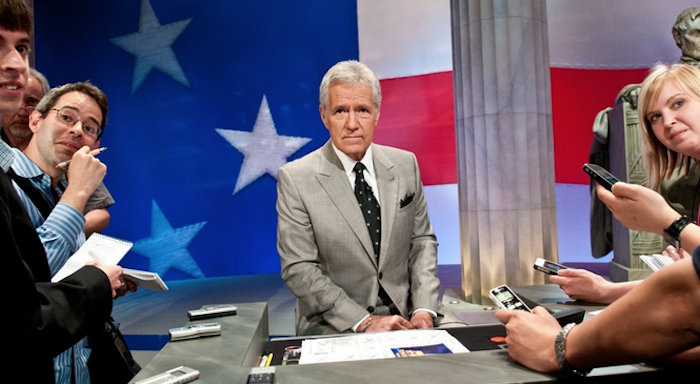 Alex Trebek died the other day. I heard the news in the half-time report of a televised pro football game. Jeopardy! and I had drifted apart of late, but I and my wife, Victoria, watched the show with some fervor for years. My ability to keep up withered over time; even at its height, I was never swift enough to actually pose answers in the form of questions. Still, we kept up with Trebek’s sad bout with cancer and felt the uplift of his occasional progress reports.

I introduced Victoria to Scrabble, and eventually my ability to keep up withered in that game too, and so we have, ahem!, drifted apart. It’s not the losing, it’s the luck, or lack of it, in what tiles you draw. That’s my story and I’m sticking to it. Perhaps it’s time for us to pick up Hangman again. No luck factor there!

There must be some sort of parallel between successful game shows, game-show hosts, and classical architecture. I will try to reach for one.

Maybe it is the luck factor. There is no luck factor in classical architecture. It has rules such as modern architecture does not. Play by the rules and it is almost impossible to produce a building that lacks beauty. You can break the rules, but only if you know the rules, which requires having rules. For modernists, it’s all about breaking the rules – the rules of proportion, the rules of gravity, etc. For the modernists, except for not having rules, there are no rules. Unless you are a genius (and even if you are one), it’s almost inevitable that you’ll produce a building that lacks beauty.

This difference was obvious to Alex Trebek, and he did not fiddle with the rules of his game. He did not try to innovate. He knew his audience was expecting predictability, and that’s what he gave them. Occasionally the stage set would get a little more snazzy – some cynics will say this was Alex’s inner modernist trying to escape – but the rules remained always the same, whether it was normal Jeopardy! with regular contestants or tournament Jeopardy! with contestants from high school and college, or special Jeopardy! pitting former winning contestants against each other. Either way, the rules remained the same.

In 2004, Ken Jennings won 74 straight games of Jeopardy! Jennings was the beneficiary of a rules change (in the show, not in the game itself) that released contestants from a limit of five games on the length of a winning streak. For 20 seasons it was five wins and poof! you were off the island. It would be the height of futility to wonder whether any of those seasons might have produced some mute, inglorious Ken Jennings.

Alex Trebek really irks me. He comes off as really snobby and condescending on the show when he has the answers in front of him! Anyone else share my disdain for him?

(The next reply went “At least you insulted him in the form of a question.”)

No, Alex Trebek did not jump up and down to induce histrionics in contestants as other game show hosts do. This leads to another parallel between Alex Trebek and classical architects. They are the adults in the room. They know the answers. They know the rules of the game. There is room for humor in the answers to which contestants pose questions, and for wit in Alex Trebek’s commiseration with contestants whose questions are wrong. The game and its rules were a bond with its audience. Never, so far as I know, did Alex Trebek look down his nose at his audience, as modern architects look down their nose at those upon whom their work is inflicted. Like Alex Trebek, classical architecture loves and respects its public, and the feeling is mutual.

So long live classical architecture. As for Alex Trebek, “What is the Latin phrase ‘Requiescat in pace’?