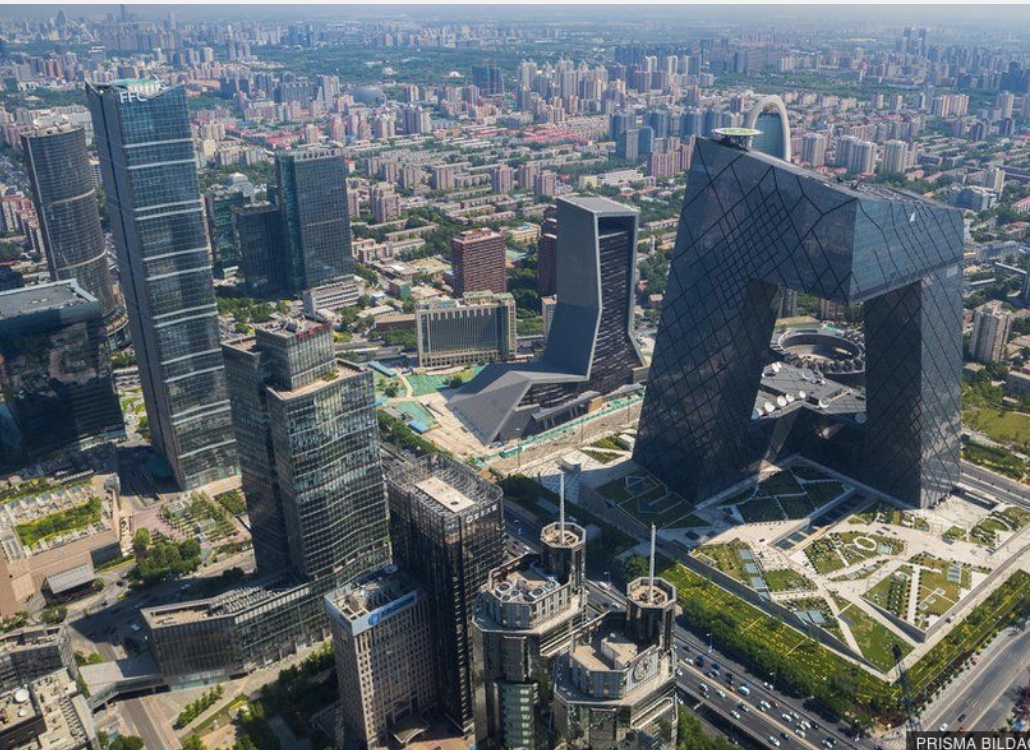 China bans copies of foreign design in its architecture

(Photo, top: CCTV headquarters (center right), in Beijing, known as Big Pants. Or is it stomping on the people?)

The People’s Republic of China, taking time off from other matters, has issued a decree banning copies of foreign design in its architecture. The decree, as described in the BBC’s “China ‘copycat’ buildings: Government clamps down on foreign imitations,” also bars “weird” design, which was already banned in 2016, and limits building heights to 500 meters (or 1,640 feet). The decree calls for “a ‘new era’ of architecture to ‘strengthen cultural confidence, show the city’s features, exhibit the contemporary spirit, and display Chinese characteristics.’” The BBC adds:

The statement, issued on 27 April but only reported this week, singles out stadiums, exhibition centres, museums and theatres as public facilities where it’s especially important to ban plagiarism.

According to the Global Times, the “fake, shoddy versions” of foreign buildings appear in “many third and fourth-tier Chinese cities.” The government did not say what will happen to existing “foreign” buildings but does say there will be “city inspections” to check for problems.

“City constructions are the combination of a city’s external image and internal spirit, revealing a city’s culture,” the government statement says. It was unclear how rigorously the decree would be enforced. It was also unclear how architects are supposed to interpret the language of the decree.

One wonders what kind of design would exhibit the contemporary spirit while displaying Chinese characteristics. Doesn’t almost all recent Chinese architecture copy some sort of modern architecture built elsewhere in the world? How would clients and designers manage under a regime in which copying global modernism is banned? China’s architects are encouraged by the decree to “show the city’s features”; how is it even possible to design a building that does not show the city’s features? Any new building becomes a feature of the city automatically and cannot do otherwise.

Perhaps the real intent is to put a stop to districts taken directly, often almost literally (though with little competence), from European cities such as Paris and London. No doubt their popularity embarrasses China’s architectural apparat. Perhaps the decree is intended to jumpstart a new era of copying the past of Chinese architecture – that is, to reverse decades of canceling China’s culture, such as the hutong alleyways that were demolished to make way for the Chinese Olympic Games in 2008. Maybe the cultural heritage of the Middle Kingdom can be resuscitated in time for the Chinese Olympic Games planned for 2022. Not holding my breath.

(Here is a 2013 BBC article with photos of copycat historical architecture inspired by European tourist meccas. Here’s another, by insider.com, from last year. Here is a 2006 piece from the UK Telegraph on the removal of the historic hutong alleyway neighborhoods in Beijing, including some right near the Forbidden City. But here is another piece, from a 2018 edition of the Urban Land Institute‘s newsletter, that reports on an effort to preserve one of Beijing’s few remaining hutongs.)

The photo atop this post includes the China Central Television headquarters, designed by starchitect Rem Koolhaas and popularly known as Big Pants. To me (as I’ve said at least a million times) it looks like it is stomping on the Chinese people. Supposedly it cannot be copied. But maybe I am missing the point. Perhaps the new decree seeks a sort of mau-mauing of pre-existing reality, in which the Chinese state seeks to rediscombobulate “weird” design as a feature of contemporary Chinese character.

It may be that a novel twist on Chinese cultural bat guano is about to escape from the lab. Let’s hope the Chinese do a better job of containing it this time.

Here is a link to the full story: https://architecturehereandthere.com/2020/05/08/china-bans-foreign-archivirus/

David Brussat, Architecture Here and There