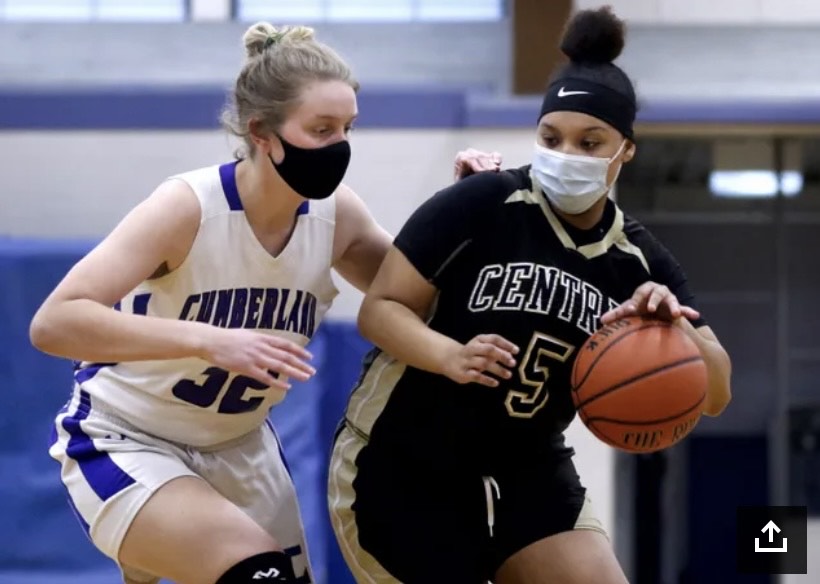 Central HS Basketball Capt. Mashiya Mangum – making a difference on & off the court

Central’s Lady Knight’s basketball Captain Mashiya Mangum has made a difference both on and off the court.

The journey into the game of basketball started in elementary school for Central High School senior captain Mashiya Mangum. “I started playing in 5th grade for my school team, Veazie Street Elementary School in Providence. We would play against other elementary schools in Providence.” Mangum said. “I didn’t know much of the game when I started; we learned about the game by watching it on television and playing around with my friends while growing up in the Chad Brown section of Providence, and in gym class. We had a team in school, and I made the team. We played other teams in real games. It was a lot of fun.”

When Mangum went to Hopkins Middle School, she did not try out for the school team until 8th grade when again she made the team. It was at Hopkins when she became aware that she may have a future in the sport of basketball and was determined to try out for her high school team, and she would become a Central Lady Knight.

Before we get to the end we have to go to where Mangum began taking the game seriously. Heading into high school she decided to join the Rhode Island Tigers in the Providence summer league. It is here she took the first step to her high school career that would earn her recognition on the statewide basketball stage. Basketball for Mangum was a family thing. She was inspired by her cousin Carl Mangum who was a star player for Central’s boys’ team. “Carl gave me the motivation for him not to be the only member of our family to excel in basketball, and I wanted to be just like him. I wanted to play a sport I loved and hope to get recognition from it. But I knew to achieve that goal it was going to take a lot of hard work!” Mangum was also inspired by another cousin, Carlos Mangum, who was a member of Central’s Track & Field team, earning himself a full scholarship to the University of Miami. “He was the first in our family to achieve such a big goal. He was one of my biggest inspirations in sports. I know that if he could achieve so much, I can too!”

Mangum volunteered for a foundation called the CBAA, that takes place in the community of Chad Brown. “We play basketball in the summer to raise money to help feed the homeless and give away toys on Christmas to those children that are less fortunate. It is her family foundation that she values the most. The team has had good seasons the last few years, with Coach Scandura and Ricci making the game fun while [reinforcing] working hard. My mother who was going through a though time has been my biggest motivation, and every time she comes out to see me play it sparks me to play harder! My entire family came out to see me play in my Junior year before the pandemic hit. My family was a great support system for me. But it is my mother, Danielle Lopez, and my father, David Mangum, who are my biggest cheerleaders every time I stepped onto the court. Along with my Aunt Rayna and two sisters, Deanna and Brandi, it gave me a great feeling that my family was there cheering me and the team on through the wins and losses. I knew they were always there for us.”

Mashiya Mangum’s career started out like most student athletes, playing for the fun of the sport and then finding her trying out for the girl’s high school team. “I have to be honest I didn’t take basketball as serious during my freshman year, I was on the Junior varsity and having fun with my friends, but I began to realize that taking the sport seriously could open doors that may otherwise wouldn’t have opened for me.”

Mangum has been a varsity starter the last 3 years at Central, where in her Sophomore year she was named 3rd team All Division and in her junior year she was named 1st team All Division and All Class. This, her senior year, has been the year of the pandemic and she does not know what to expect. The season has had less games and opportunities to play, the Lady Knights had been moved up a division based upon their past season’s success. “We were simply happy and grateful that we had a season at all, for a while it looked like there wasn’t going to be one. Although we did not make the playoffs we had a lot of fun and we grew closer as a team. I’m going to miss this when I graduate.”

Central’s Athletic Director Michelle Rawcliffe reflects back on Mashyia’s career and says, “It was a privilege to watch Mashiya play for the last three years here at Central. She is hardworking and respectful young lady. I look forward to hearing about her success in college. She definitely will be missed at Central.”

So, what is ahead for Mashiya? “I am looking at a few different schools to attend. I would like to start off studying criminal justice, perhaps at Bristol Community College and then head to UMass to complete my studies and get my degree, but there are other options as well. One thing is for certain; whatever path I choose the basketball court does figure into those plans.”