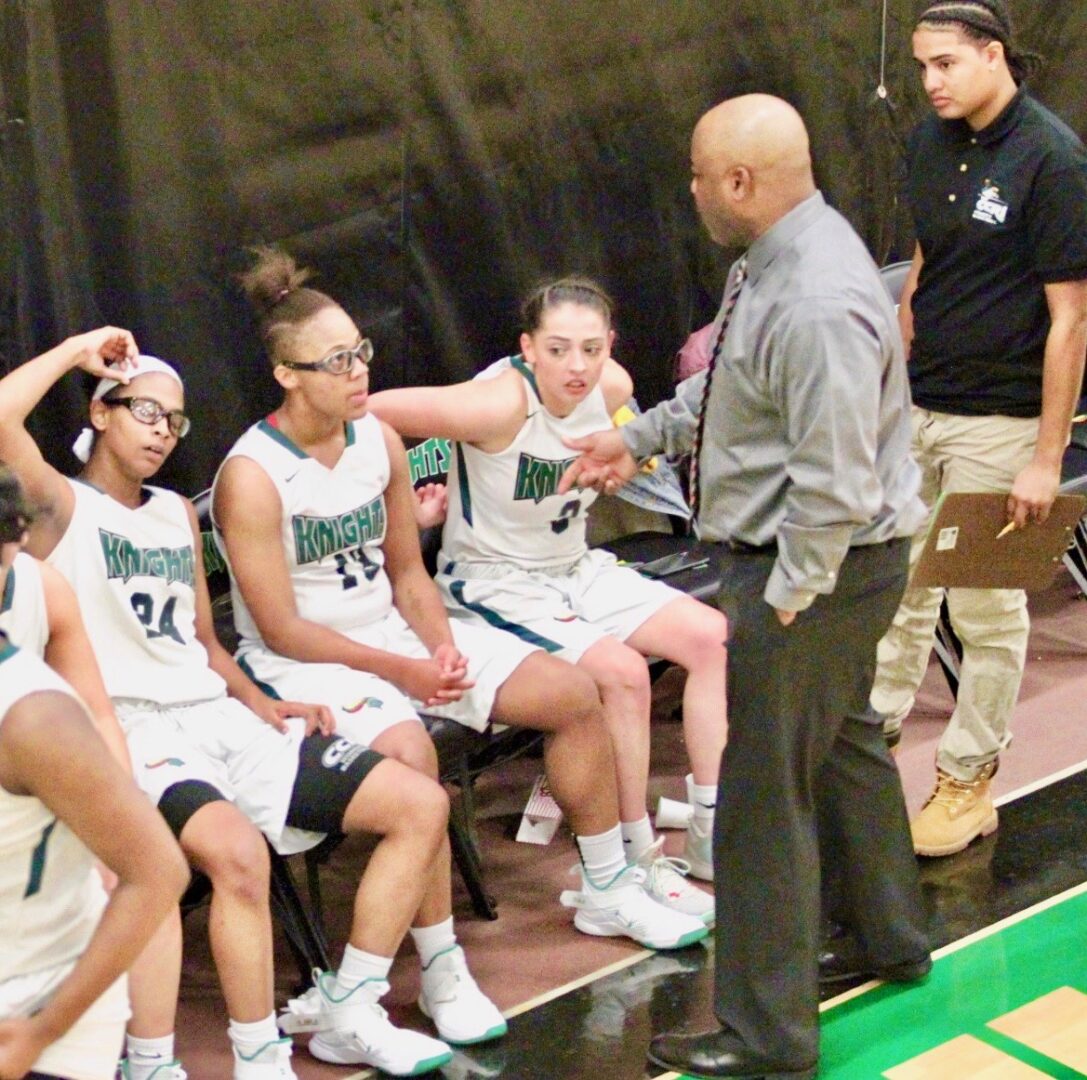 CCRI’s Women’s head Basketball coach Doug Haynes is on a mission and that mission is to bring the Lady Knights back to the top.

Haynes knows how the view is from the top, an All-Stater in two different sports, football and baseball, while playing for the West Warwick Wizards. He may have had a chance to make that a third sport as an All-Stater while on the basketball team, but ironically Haynes said, “basketball wasn’t my best sport and my teammate and best friend, Tommy (Garrick) was so much better.” Garrick went on to play basketball at URI and made it to the NBA. Haynes went on to CCRI where he played both basketball and baseball for the Knights.

Haynes found himself coaching several sports at the high school level. As an assistant football coach at Moses Brown School, and for 17 years as the head coach at the all-girl school, Bay View Academy, it was at Bay View where he built a basketball powerhouse and his reputation as one for the state’s best basketball coaches. He was named Division 1 Coach of the Year seven times and was named the 2014 National High Federation Coach of the Year while at the helm of Bay View.

Haynes admits that his first season was sluggish at 6 wins and 10 losses, however, each season after the Bengals never had a losing season under his leadership. The team went on to win two state championships and runner-up five times, and they won their division championship seven times. What makes that accomplishment even more impressive is the fact that they were always matched up with two other private high schools, LaSalle Academy and St. Raphael’s while playing in division 1. Bay View had to play Cranston East, Barrington, North Kingstown and South Kingstown when each of those teams built up the power to go head to head with Bay View, but they remained the “Queens of Hill.”

But Haynes always knew that he wanted to coach at the next level and after 2018 an opportunity opened that would change his coaching life. The head coach of the CCRI Lady Knights had accepted another coaching position and it was announced that the school would begin the search to replace her. This was his opportunity.

“I was getting to the point where I wanted to start looking elsewhere, and   coaching at the next level was the step I wanted to make.” Plus being a Hall of Fame alum certainly didn’t hurt his chances. “Coaching at CCRI was a dream of mine. I attended CCRI and coming back as the head coach was very appealing to me.”

Apparently, the search committee thought so too, naming Doug Haynes as their next women’s basketball coach. He was returning to the school where he excelled on both the basketball court while playing for the Knights under the legendary coach Vin Cullen (who the athletic complex at the CCRI Warwick campus is named after), and baseball coach Whitey Fell from 1987 through 1989. When Haynes finished his career at CCRI he had been named as the team’s MVP twice, a two-time All-New England selection, and as a sophomore he was NJCAA All-American. Haynes scored 1,043 points while wearing the CCRI basketball uniform, making him the 3rd all-time leading scorer in the team’s history.

The players at this level know that athletics is now a means to an end. The end being a degree that they will use for their chosen career and getting the best opportunity to make their dream come true all while continuing playing their chosen sport – a win-win!”  He goes onto say, “There is a lot of competition in this state to get commitments from the students/athletes to come to CCRI and play. The challenge of convincing them to come here and get their associates degree and slowly getting accustomed to balancing schoolwork and practice/game schedules at CCRI is a plus before they move on to the next level. We help them along each step of the way. We also help find and guide them to the next school that will be beneficial in their journey to getting their bachelor’s degree.”

The Lady Knight coaching staff is an experienced blend, Denise Scott who played for the team earning All American honors is in her fifth season on the coaching staff, as is Victoria Wilkenson who played for Warwick’s Pilgrim High School.  Joel Tuoni, who was a teammate of Haynes when they both attended CCRI and was a very successful high school coach in his own right, and Brittany Wilson, who played for Haynes at Bay View Academy, are both in their second year as assistant coaches.

Inheriting a veteran, but small both in numbers and size, that in 2018 went on to win their District championship and were Regional Runner’s Up. But commitment from some high schoolers didn’t work out as planned. Some decided to go to other schools or jump into the job market instead of continuing their education or putting it off a year or two. This made Haynes and his staff rework their recruitment strategy for the future.

“Unlike high school where the families are involved in their daughters’ high school decisions, the student is more in control of that decision, and it is our job to point out that attending and playing at CCRI would be the best fit for them as they go on to a meaningful career, and the support system that we have and continue to put in to place is here to benefit more of the student than the athlete,” the coach said.

Coach Doug Haynes will be entering his third season in 2020-21 and he believes with the efforts he and his staff have made this season and the focus and plan they have made for the future, that this will only benefit the school and his basketball program for many years to come.

Coach Haynes has always been successful at every challenge that he ever faced, and failure was never an option; he is not going to start now.