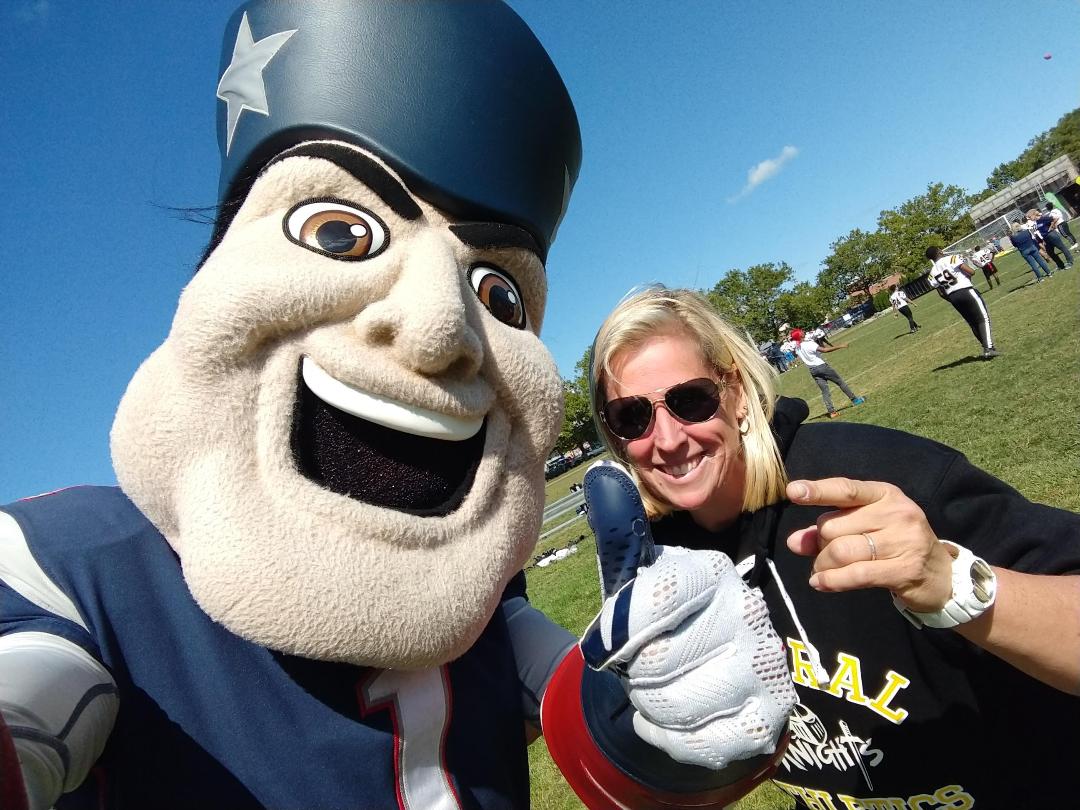 Trying to talk to Michelle Rawcliffe for this story, is like trying to catch the road runner, she never stops moving! Never slows down and is constantly on the go. You get the feeling that she is in a thousand different places at once.

At a recent basketball game where the Central Boys’ team was about to begin their senior night festivities, Michelle entered the facility having just finished up with her duties at Central’s main building. She hit the ground running making sure that the benches were ready for both the home and away teams arrival, then off to check out the activity that was going on as the girls’ basketball team was finishing their final practice, as they were preparing for their upcoming home play-off game against Warwick’s Tollgate High School.

Michelle talks to staff, coaches, and the players often while she is walking to and from different stations of activity all along the floor of the Providence Career and Technical Academy where Central practices and plays all of its home basketball games and indoor track meets. Then she heads across the street to Central High School to check on the wrestling team which practices and hosts all of their home meets in their gym.

She is in perpetual motion and if you want a minute of her time you must keep walking and stay with her. It isn’t because she doesn’t have the time for you, it’s just because she wants to make sure that all of Central’s athletic activities are moving along in the right direction.

I recently had the opportunity to sit down with Michelle and talk to her about her career and what direction she would like to see Central’s athletics head towards. “It is my goal to provide a system of support and success for each athlete.” said Michelle, “the sense of Central’s history in athletics, community, and pride runs very deep here. I am trying, with the help of my coaches, to bring back that sense of pride.”

The message must be getting through, because the Central sports teams have been achieving a lot of success in both athletics, and in the classroom. “The perception of Central’s student athletes and the inner-city school population as a whole is often skewed.” “What I have come to realize is that our student athletes are as intelligent, polite, and capable as any student athlete in the state many of our athletic teams, over the years, have received multiple good sportsmanship awards.”

Michelle knows something about success and support through sports firsthand. At Warwick Veterans Memorial high school, she played both soccer and softball for the Hurricanes. In softball she was named to the All-State team, All Division, and All City, and as the goalkeeper on the soccer team she was named All City and All Division.

Attending Keene State College, Michelle was the team’s second goalkeeper. Keene State went to the Division II National Championship tournament her freshman season. After graduating Keene State, with her degree in hand, she returned home determined to become a health and physical education teacher. Her first teaching job was at the Prout School in Narragansett, where she spent six years and doubled as the school’s Assistant Athletic Director. She then moved on for a year at Providence’s Classical High School, then to Central High School for five years, before spending a year each at Mt. Pleasant and the Feinstein School.

Michelle currently is a physical education and health teacher at the Providence Career and Technical Academy, the Athletic Director at Central High School, as well as the head coach of the Central High School Lady Knights softball team. “I have the unique opportunity of working in both schools. I enjoy getting to help the student athletes reach their goals, both in the classroom and on their respected sports teams.”

In her “off” time, before she retired from the sport, Michelle spent all of her free time playing the sport she loves, softball. During her softball career she was inducted into both the New England USSSA and the Rhode Island Slow Pitch Softball Hall of Fame. She played for Kohler’s Fair Warning which at the time was a regional women’s softball powerhouse, she even traveled on the national circuit for a year with the Diamond Queens which were based out of Tennessee.

Michelle returned to the Rhode Island/New England traveling circuit, hooking up with teams such as Commotion, Fair Warning, and Bad Intentions. “Fair Warning finished in the top 4 in the A, B and C divisions multiple times and while on Commotion her team finished as the runner up in the A division. “That team was a lot of fun, we put the team together with all friends just for that reason- to have fun. For the two years that we were together we didn’t win that many tournaments, however we completely killed it in our run for the top spot during the world’s. We took out a lot of teams including Fair Warning, but unfortunately we fell short, finishing in 2nd place. My passion for softball will never be lost.”

Michelle’s passion is to now help Central High School athletics get back to their glory days when they were a powerhouse in multiple sports. “It all begins with the athletes and having coaches who care. If those two parts of the equation are in place, then success will follow. Success isn’t always measured by wins and losses. It’s in the character and sportsmanship of the athletes and how the teams represent the school.  If they take care of business in those areas, the wins will take care of themselves. It’s exciting and exhausting, it’s fulfilling and rewarding, and I wouldn’t have it any other way.”