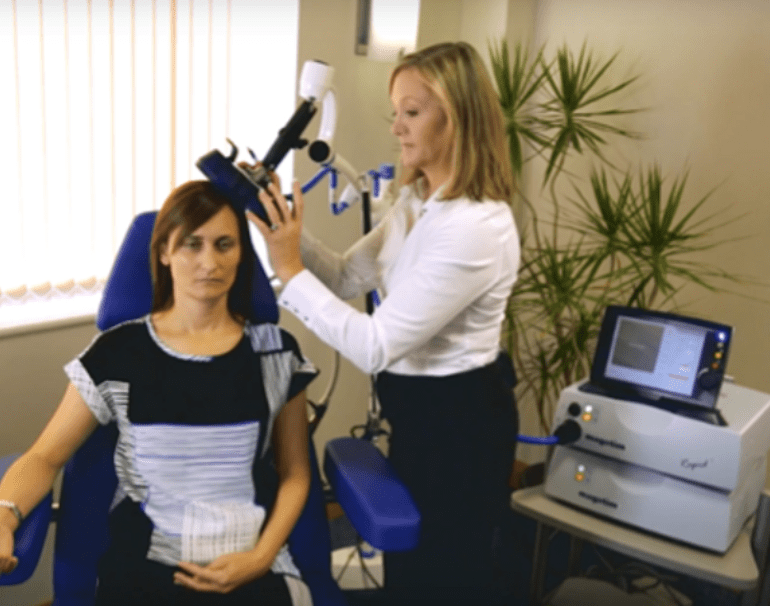 The Pediatric Anxiety Research Center (PARC) at Bradley Hospital has begun enrolling teens for a study focused on the use of a non-invasive type of brain stimulation called transcranial magnetic stimulation (TMS) to improve brain activity in teens with obsessive-compulsive disorder (OCD).

Two to three percent of youth are diagnosed with OCD, a disorder in which they experience obsessions (intrusive and distressing thoughts or images) that make them feel driven to complete compulsions (repetitive or unhelpful actions). These symptoms disrupt important areas of functioning, including in school, friendships, daily activities such as sleep, and family relationships. Untreated OCD in childhood can lead to problems later in life, including high rates of disability and other disorders such as depression, substance abuse, and suicide attempts. Currently there is no cure for OCD. Cognitive-Behavioral Therapy and medications are effective treatments, but many children and teens do not get enough benefit from these options.

“Previous research has shown that a part of the brain called the pre-supplementary motor area (pre SMA) is overactive in people with OCD. The pre SMA is very important for being able to stop an action that isn’t helpful for a given situation,” said Kristen Benito, Ph.D., the Research and Quality Improvement Lead for the Pediatric Anxiety Research Center at Bradley Hospital and principal investigator for the study. “By definition, OCD compulsions are a type of unhelpful action. Our goal is to learn whether we can enhance kids’ ability to stop those actions by reducing brain activity in the pre SMA. If we’re successful, this could eventually lead to a new treatment option for kids with OCD.”

The study will include children between the ages of 13 and 18 who have OCD. The study involves an assessment of symptoms, electroencephalogram (EEG), computer tasks, and TMS.

“Transcranial magnetic stimulation, or TMS, research involves holding a hand-sized magnet over someone’s scalp, which can either temporarily inhibit or activate the brain cells underneath. We’re using TMS to learn if temporarily reducing the overactivity in the pre SMA makes it easier to stop an unhelpful action,” said Benito.

TMS is FDA-approved for adults with OCD but research in this area has not yet been extended to children or adolescents. “In general, research for children lags behind that for adults. We do know that TMS has been safe and well-tolerated by most children in research studies—but no one has tested TMS specifically for youth with OCD,” Benito said. By better understanding how TMS influences brain activity and stopping behavior, the study team hopes to pave the way for the development of new treatments that involve a combined behavioral and biological approach.

Founded in 1931, Bradley Hospital (www.bradleyhospital.org), located in East Providence, R.I., was the nation’s first psychiatric hospital devoted exclusively for children and adolescents. It remains a nationally recognized center for children’s mental health care, training and research, bringing in approximately $7 million in external research funding annually. Bradley Hospital is a member of the Lifespan health system and is a teaching hospital for The Warren Alpert Medical School of Brown University. Follow us on Facebook (www.facebook.com/BradleyHospital) and on Twitter (@BradleyHospital).