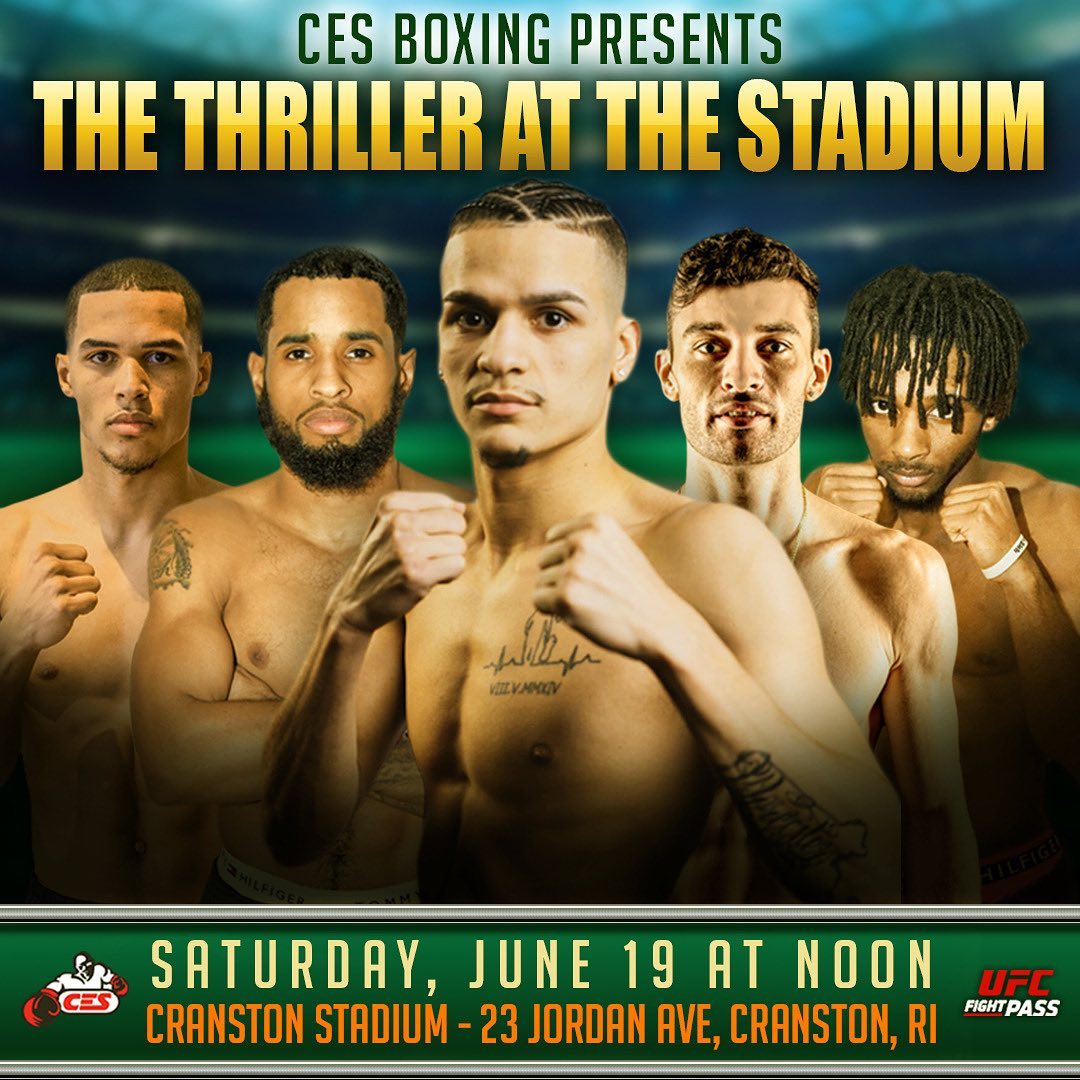 CES Boxing is back after a long break duyring the pandemic – and it’s coming to Cranston.

Jimmy Burchfield, Sr., President and CEO of CES Boxing came to Cranston a week ago to announce the return of CES Boxing – and the first ever Live Amateur Boxing event at Cranston Stadium.

Set for Saturday, June 19th, the ring will be set up on the field of the stadium, and for the first time in a year, a CES boxing event will be held before a live audience.  Cranston Mayor Ken Hopkins joined in an enthusiastic welcome to Cranston.

Some of the presentation card for the event:

Some icons in boxing will be present

Michael Parente, CES Boxing matchmaker, publicist for CES MMA will be doing play-by-play alongside color commentator, former boxer “Sucra” Ray Oliveira. Likewise, the iconic Gary “Tiger” Balletto, who grew up in the Silver Lake area of Providence, will be in attendance since his son, Gary Balletto III, is fighting on the pro portion of the card while his youngest, Aiden Balletto, fights on the amateur portion.

What do you need to know about boxing?

We asked Parente for a good resource to become more familiar with the sport of boxing – he provided us with this link: https://bit.ly/3pe4vbA – it will give you a list of boxing terms and “lingo”.

There will be two event selections:

Safety Services & Licenses Committee voted to approve (5-2, Vargas and Ferri opposed) an event permit and accompanying liquor license for a boxing event. The council said the first event is anticipating about 1,000 people for the first event and 500-600 for the second. Parking will be utilized from the nearby Greater Providence YMCA. The Cranston Police Department have approved a safety plan.

Concerns of dissenting council members concern including a liquor license as part of the event, and the waiving of fees the city could have made – upwards of $3-5,000 (Stadium rental) and police/fire detail estimated at another $2,400. The city will also take responsibility for event clean-up at the Stadium and surrounding neighborhood.

City council member Donegan included why he would have voted ‘no’ on the liquor license and part of that was the feedback he received from neighbors in the area.

“At Thursday night’s committee meeting of the Safety Services Committee on May 27th, 2021, I voted yes to grant a license to CES company to organize a Boxing event at the Cranston Stadium on June 19th.

I am compelled to clarify the reasoning behind my vote.

I prefer not to go back and forth on social media to discuss my decisions. I have never done so, and I do not intend to start now.

First, I want to make clear that I respect my colleagues’ decisions against the approval of the Boxing application license. Second, I respect all those who spoke up against the license. We can agree to disagree. I am fine with disagreement.

I have always believed in the goodwill of people — unless proven otherwise.

While I do not feel that the issues are solely about financial concerns, I have disagreed with the decision to completely waive rental fees for the event. Thus, I requested that there be an allocation of funds to the city of Cranston, and as a result, the applicant has offered $500.

Let me add a little more context. My reasoning behind my support of the Boxing Application Event is as follows.

1.  As I stated at the committee meetings on May 27th, 2021, I voted to approve the Boxing application because I believe the event will serve for the greater good of the people of Cranston. I maintain this position.

2.   Although residents express disagreement about the license, the number of people in favor is far greater than those who oppose it.

4.  We follow policies and procedures to grant or deny projects in our city. And so, we have institutions who are charged with ensuring that our policies are appropriately, correctly and fairly, implemented.

5.   Each one of us has their role. I certainly do not want to overstep my role vis-a-vis such as our police officers and our fire department.

6.  When it comes to safety concerns raised, it is the task of the police department and fire department to reassure us. These officials indicated their approval of the safety plan. Given that, I am also in approval.

7.  Although there are valid concerns about the policies, those who speak publicly to improve what needs improvement deserve consideration.

8.  It is not my purpose here to pre-judge the work of the police department, the economic development, and the city administration.

9.  Granting a license does not imply a need to scrutinize the several institutions involved in the process.

10. I want to give these institutions the benefit of the doubt.

11.  Perhaps, the time to question the judgment of those institutions overseeing this process (the licensing process) may come. However, that was not the purpose of the meeting on May 27th.

12.  Having an event that will bring us together, that will offer hope to our residents as we emerge from a year of pandemic is, I believe, the right thing to do.

13.  I voted yes.  I voted “Yes,” not because I was pressured, and not because I was afraid. I voted “Yes” and supported this application because the goal is bigger than being Democrat or Republican. As I have always said, I am committed to working together for the betterment of our city. For all of us, I intend to keep this promise even though my positions may not please everyone.”

CES Boxing is one of the top promotions in the northeast and one of the few to successfully promote both mixed martial arts and professional boxing. Launched in 1992 by longtime boxing judge Jimmy Burchfield Sr., the promotion is the only in professional boxing to boast two reigning WBC Youth world champions in lightweight Jamaine Ortiz and featherweight Irvin Gonzalez. CES Boxing recently teamed with UFC Fight Pass, the world’s No. 1 streaming platform for combat sports, to showcase its events to a worldwide audience.