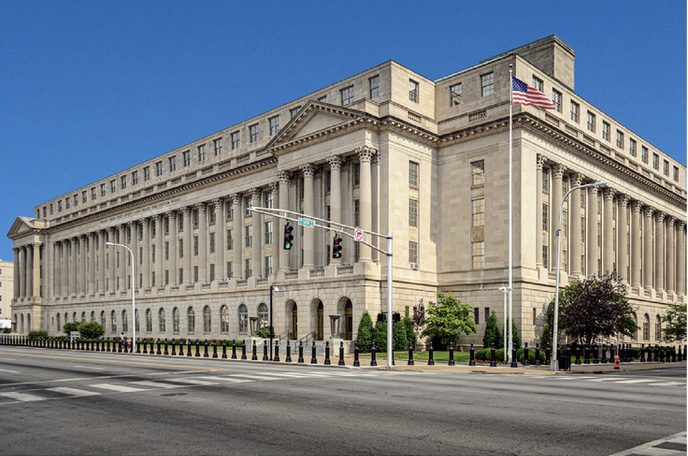 by David Brussat, Architecture Here and There – contributing writer, architecture

Donald Trump signed an executive order on Dec. 18 to mandate a return to beauty, at least in federal architecture. His successor, Joe Biden, revoked it on Feb. 24.

Architecture is a huge field of human endeavor. Along with the planning of cities and towns, and the arts and crafts that enter into civic beauty, it forms the stage on which the human comedy is performed. For millennia, our dear species has botched most of what it has touched with its failure to solve or alleviate many of its problems, from poverty to war to disease and beyond. But until a century ago, few would have argued that the stage upon which these failures unfolded was part of the problem.

At least suffering humanity could look around and see beauty, lots of it and for free. Architecture may be said to have uplifted the soul. Now the queen of the arts has joined the long list of human failures, and the stage set has been taken over by architecture based not on nature or humanity but on machines. Much of the old beautiful world has been replaced by a cockamamie sterility that neglects old problems and inspires new ones. At worst, the new architecture seems to beckon humanity toward an authoritarian future, if not planetary extinction.

With its generally tedious qualities, modern architecture has caused people to turn away from their built environment as a sort of defense mechanism. Local efforts to enable participation in development projects, fostered from above or below, have largely failed to arouse much interest from the public, so our local environments continue to go from bad to worse.

Are we doomed to remain on this path? So it might appear. Donald Trump signed an executive order on Dec. 18 to mandate a return to beauty, at least in federal architecture. His successor, Joe Biden, revoked it on Feb. 24.

But beauty is a widely approved commodity, and even its erosion in recent decades has boosted its premium. Scientific research and academic studies have fortified centuries-old anecdotal evidence that most people prefer tradition over novelty in how we build the civic realm and our own private domiciles. Most recently the Harris Poll showed that classical architecture is favored by almost 75 percent of the public in every demographic category surveyed. The human brain is hard-wired to prefer the characteristics of architecture that have evolved over centuries by natural processes that reflect the reproductive patterns of species in human neurobiology. On the other hand, skepticism of architecture that “starts from zero” is widespread.

Biden’s revocation of the Trump mandate to prefer classical and traditional design for federal courthouses and offices in Washington, D.C., and around the nation does not mean a halt to efforts to bring beauty back into the ambit of architecture. Pressure toward that end remains strong. No party has a lock on beauty or how it can be returned to our built environment. Architecture can and should be a bipartisan or even a nonpartisan issue.

After details of Trump’s draft executive order leaked to the press a year ago, many classicists opposed it out of dislike for the president or for its design mandate, not realizing that it merely switched the existing mandate from architecture that is widely disliked to architecture that is strongly preferred by the public – a factor you’d think would be important in a democracy.

Classicists who opposed Trump’s order suggested alternatives, almost all of them quite reasonable, politically and programmatically. For example, an anonymous source at the time wrote me that the official principles that have mandated a modernist approach to federal design since 1962 could be transformed into a mandate for a level playing field for major commissions – which exists almost nowhere today. He identified a mere three changes in the language of the principles that would be required to do so.

Steven Semes offered a suggestion for a body modeled on the Building Better, Building Beauty commission in Britain that has just issued a set of mandates that, above all, engage local publics officially in the processes that vet and approve local development projects according to local ideas of beauty. The various suggestions for some new body of individuals experienced in the field of architecture to hash out a way forward probably appealed to most attendees at the recent Traditional Architecture Gathering. For example, TAG 4 featured a presentation by Rhode Island traditionalist David Andreozzi, who argued that combining cultural and contextual sustainability would produce an architecture of climate resilience regardless of design. New Jersey architect Mark Alan Hewitt, who was also at TAG 4, has, in his upcoming column on the Common/Edge website, a long list of suggestions for the Biden team on the way forward in architecture.

All of these proposals might figure into a rumored effort to engage the Biden administration through a committee that would, above all, bring science to bear on reforming federal architecture. Nikos Salingaros, a mathematician at the University of Texas, has developed many of the neurobiological theories that support the affinity between humanity and traditional architecture. He would be involved in this committee with Mark Hewitt and others. Both were at TAG 4, which was run by Nir Buras of the Classic Planning Institute and author of The Art of Classic Planning. Buras was the anonymous source who suggested the changes, noted above, for the existing mandate on federal architecture. He has produced an extraordinary plan to turn the banks of the Anacostia River, sister of the Potomac in Washington, D.C., into a classical paradise that would serve some of the largely neglected black neighborhoods of the capital.

President Biden himself is a longstanding lover of trains and pitchman for public transportation, including Amtrak. Perhaps, as he seeks to unify the nation, he might be interested in another idea from TAG 4, to rebuild New York City’s crumbling, inhumane failure of a Penn Station in its original 1910 classical style, before it was demolished in 1963. That was the year after the 1962 mandate for modernist federal buildings. Such a project would teach millions of people a day that beauty is not lost to the past but is possible today. Now is the time to harness science to bring beauty and federal architecture together in the 21st century.

To view the full story: https://architecturehereandthere.com/2021/03/05/after-biden-nix-trump-e-o/