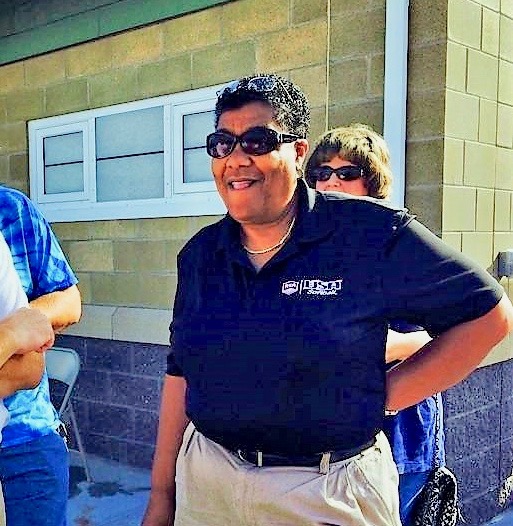 For the last 28 years Rhode Island USA/ASA softball state commissioner Bev Wiley has had a firm hand on the wheel and continues to guide the association through uncertain waters.

She grew up in Warwick, Rhode Island, the youngest of six children. Bev’s mother was a stay at home mom, and her father was postal clerk who also was the editor of the Providence Chronicle, a publication that provided news and events to the African American community. The one thing Bev knew at a young age was that she loved sports. She loved the competition and most of that competition was against the neighborhood boys on the local playground.  She began her playing career with South County Coca Cola in the Women’s Fast Pitch league under coach Wilma Briggs, a legendary member of the All-American Women’s Baseball League. Bev began playing slow pitch in the early 70’s competing at the highest-level culminating with a trip to the 1976 ASA Women’s Major Slow Pitch National Tournament with her team Sessions TV where they finished 8th. “Magic” was the nickname that was given to her by her teammates and she was known as that catcher on her team, that would often harass opposing batters in the batter’s box.

In 1980 after retiring from playing, Bev entered the ranks of umpiring. She got her start with the ASA when then ASA (Amateur Softball Association) commissioner A. Joseph Mattera approached Wiley and offered her a seat at the table of the ASA’s State Board of Directors as the State’s first female Women’s Commissioner. Up until Wiley that position was always held by men. Wiley jumped at the opportunity and it was at this time Wiley began navigating uncharted waters. Bev began implementing her vision on how the girls and women’s program could be. That time, softball for women and girls was primarily slow pitch until the high schools in Rhode Island began to change their softball programs over to fastpitch. Wiley oversaw a huge jump in the women’s softball program under her leadership. It was also under her leadership that the women’s program grew to over 50 teams, with 5 divisions of play. “ASA was named the National Governing Body of Softball by the US Olympic Committee in 1978” Wiley said. This enabled ASA Softball’s National teams to continue participation on a larger stage which included the Pan American games and World Championships.

When Mattera unexpectedly died, the ASA search committee did not have to look far to find his replacement; she was sitting on the board. “At first, I was hesitant to throw my hat into the ring, but with some encouragement from some of the other board members I went for it!” When the ASA representatives flew in and interviewed the candidate, the three-person committee had only one name on their list – Bev Wiley. So, in the winter of 1992 Bev Wiley became the first woman commissioner (and so far, the only woman commissioner) in Rhode Island, and only 10 out of 100 Associations in the US (now 1 of 4 out of 67 Associations).  “I knew if I got the position that I could do it, but it still was a shock to hear my name announced when the decision was made.”

To say that Wiley being named was met with a lot of fanfare would not be totally accurate. “I knew that softball in Rhode Island was an old boys’ network, and me being a woman was going to be a tough hill to climb.” Wiley soon began to win over the naysayers a little at a time. Her reputation for being tough, reasonable, and fair while holding true to the directive and mission that the ASA guided their program.

“During the early years coaches and players tried all sorts of antics to manipulate decisions to their favor.” But Bev held true to her beliefs of what type of program she was going to have under her administration. “Some of the stuff was quite inventive and even entertaining. But little by little as the teams got to know me and I got to know them, we hit our stride.”

ASA softball under Wiley in the 1990s was successful. Overseeing a Men’s, A, B, C, and newly created E division as well as Men’s Major and “A” Industrial, Men’s Modified and Women’s Major, “A”, “B”, & “C” and Men’s Seniors. Rhode Island was sending teams all over the country to participate in National Championship tournaments in every division, those team that were playing “A” and “B”.at that time fondly refer to the 1990s as the Golden years.

Team registrations were high, there were ASA leagues active in every city and town in Rhode Island and with a few bumps from other affiliations that never affected the ASA program things were good. “I always said that the teams had a menu to select from, I felt that the ASA offered the teams the most, but it was up to them to choose.”

At the same time the ASA was overseeing the Junior Men’s, Men’s and Junior Women’s and Women’s National Teams participation in the Pan-Am games and other International competitions. In 1996 everything changed for women’s and girls’ softball forever. “The Olympics were being held in Atlanta, Georgia and Women’s softball was for the first time being played as a medal event. By 2000 Rhode Island high school softball converted most of their teams from slow pitch to all fast pitch, which also saw an increase in travel team and youth recreation leagues, offering fastpitch along with slow pitch. Surely the 1996 & 2000 Women’s Olympic teams winning back to back gold medals was also a factor as the youth softball programs exploded, college scholarships where being offered and the participation numbers soared. Bev credits Junior Olympic program commissioner Dave Either and Umpire-In-Chief Sue Johnson for the phenomenal growth of the program. “They took the program and ran with it; it has been one of the most successful youth programs in the entire country, and I owe it to them and the staff that they built over the years.”

Since being on center stage with the Olympics games, the USA Men’s, Women’s and Junior Men’s and Women’s fastpitch teams continue to play on the world stage either playing in the Pan-Am games or International events, and Bev has been there along the way. The Olympic committee (IOC), decided in 2006 that after the 2008 Summer games softball would be dropped from the Olympic program. However, softball was added back to the Olympic program in 2013, when the IOC voted to add sports to the games for 2020 in Tokyo, Japan. In 2016 Bev was selected to be a member of the National women’s team selection committee who are responsible for the selection of the Junior Women’s and Women’s National teams and ultimately the US Olympic team. Unfortunately, with today’s events affecting the entire world, it has been decided that the 2020 Summer Olympics will be pushed back a year to the summer of 2021.

Back home the girl’s youth fastpitch game is as strong as ever, while the men’s, women’s and co-ed are holding their own, maybe even a little stronger and as far as the men’s program. “Contrary to what people think, the men’s and women’s program, as far as USA is still strong. “On a National level we have a Men’s and Women’s Slow pitch National team as well as a Men’s and Women’s futures team that participates in the ‘Border Battle’ with Canada every year.

In Rhode Island we may not have the open teams that we used to, but we have several recreation leagues all over the State. In addition, we have church leagues, Latino leagues, and even have a modified men’s program. All told we still register somewhere around 300 adult teams, over 700 youth teams and close to 200 umpires” Asked if she would consider retiring after 28 years at the helm of softball in Rhode Island, Bev hesitated, and said “I have been thinking of it, and am inching to it, but not yet. I still have a lot of things to do before that happens. I represent the Northeast Region as Vice President on the USA Softball Board of Directors which gives me an opportunity to contribute to ways of improving our game, as well as my continued work on the Women’s Selection Committee.” In other words, she will never retire, and that is good for Rhode Island softball, there has been no bigger advocate, cheerleader, fan, and supporter of softball in Rhode Island as Bev Wiley, who was inducted into the inaugural class of the Rhode Island Slow Pitch Softball Hall of Fame in 2018.

If you are interested in learning more about the USA softball program and what they offer, check them at www.usasoftballri.org.