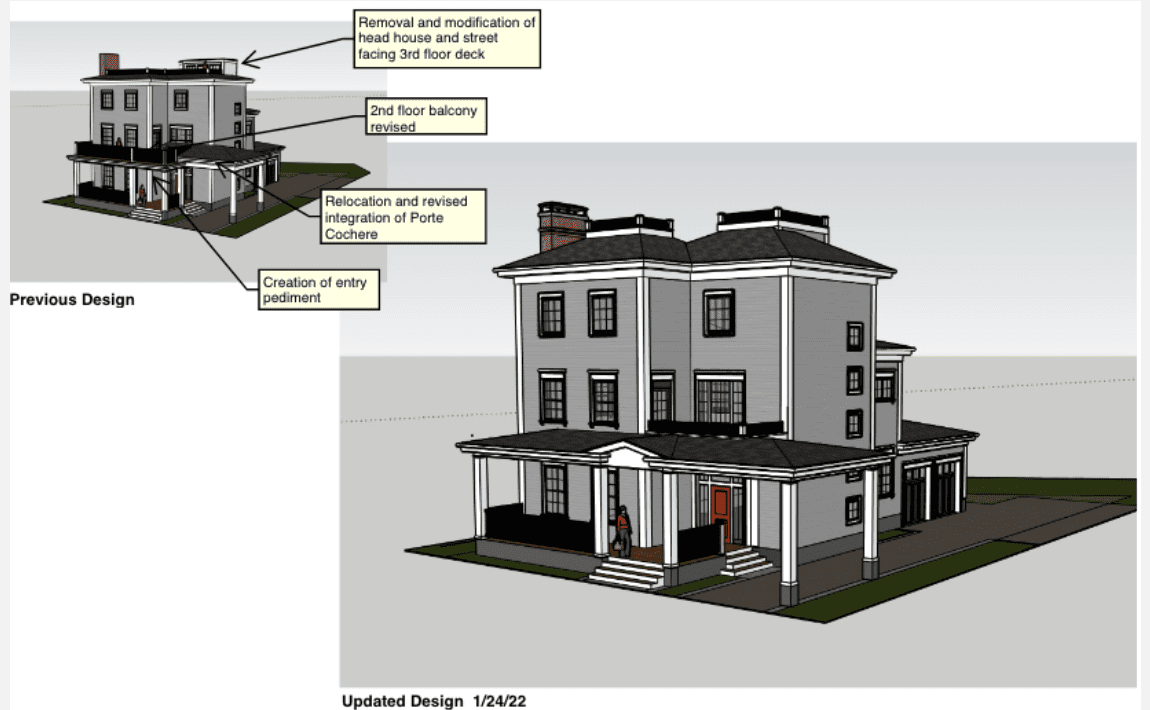 The proposal for a new house on Williams Street where no house has ever been built has, in my mind, slid in status from buildable perhaps to buildable not. I refer to my own minimal support for the design as okay if built with acceptably historical materials, such as wood rather than PVC for details, and assuming that the details meet the high standards of the historic neighborhood, which sits less than half a block off of Benefit Street, Providence’s famous “Mile of History.”

In the end, the Providence Historic District Commission decided to “continue” the process – that is, action to grant conceptual approval was rejected for now and the proponents were urged to return to the next meeting to continue the process with an improved proposal. If they want to.

The HDC met Monday, heard developer Jeff Hirsch and his three architects for two hours, and concluded by rejecting “conceptual approval.” That is the first phase of approval, and deals with such matters as the height of the building, the distance between its front and the sidewalk of Williams Street, the number of balconies, or decks, on the house, but not whether, for example, the detailing of the cornices is appropriate, or whether they are made of historically appropriate construction materials.

Synthetic rather than natural materials are not only insufficient, but are usually a sign that effort will not be made to incorporate an appropriate amount or quality of detail for a historic district. And yet, according to a source, the cornices, frieze, trim and rail in the proposed house are to be made of PVC – a form of plastic. The roof is asphalt shingle. The clapboard is not of wood but of cement siding.

All this raises questions about whether the developer even intends that the house should fit into a historic district, and causes me to feel greater skepticism about the project as a whole. Commissioner Tina Regan said that with all the porches and railings and doo-dads, “it looks like a lady with too much jewelry.” I am inclined, at last, to agree with her.

The proponent’s architects apparently did not even know how tall the house was supposed to be – three stories on a street that features mostly one- and two-story houses, but how many feet tall? It’s an odd thing not to know. Since its closest neighboring houses are three-story houses, I did not agree with most opponents that its height or its massing were too large, and I still do not.

Yet the proponents now seem to have lost at least some enthusiasm for their project. For example, at Monday’s HDC meeting they were whining, according to my source, that their budget is not big enough to make some of the changes that opponents and the commission seem to want. Hirsch, the developer, even went so far as to say, on more than one occasion, that he was “trying to get to a yes here.” Does he mean he’ll say anything to get conceptual approval from the commission? Not a good look. Is it a sign of flagging enthusiasm, a throwing up of hands as the commissioners appear more skeptical of Hirsch’s proposal? Or is it a sign of even more enthusiasm than might be proper. It is hard to say.

There may be more to this than meets the eye. It did not come up at the meeting, and it may be gossip signifying nothing, but a couple of weeks ago I heard that proponent Hirsch was connected with one of the three firms proposing to build a large apartment complex blocking river views from College Hill on Parcel 2 of the waterfront east of the Providence River, near where the pedestrian bridge lands on the East Embankment. To my knowledge, he has not mentioned this connection before the commission. I looked at the documents and it was true. Cynics like me immediately and naturally wondered whether Hirsch wanted to build a house for himself on nearby Williams Street because he knew the fix was in for his firm to build the apartment complex. Well, that was clearly not the case, since that plan was rejected by the I-195 Redevelopment District Commission two days after the HDC meeting. If he knew about this in advance, it might cause a deflation in his desire to have a house of his own nearby.

I understand that there has been considerable confusion whether opponents of the proposed house on Williams Street have been accommodated by the HDC in their desire (and their right) to speak at Monday’s meeting. Those who wrote to the commission were, for the first time, it seems, not allowed to speak out at the meeting itself. Before the commissioners rule on the Williams Street proposal, it should figure out what the law says about who may speak at meetings, and stick by what it decides – at the next meeting and on into the future.

There is no excuse for confusion on this matter. It is a free-speech issue, which should be a top priority for a local development agency, whose deliberations are where the rubber meets the road of democracy.