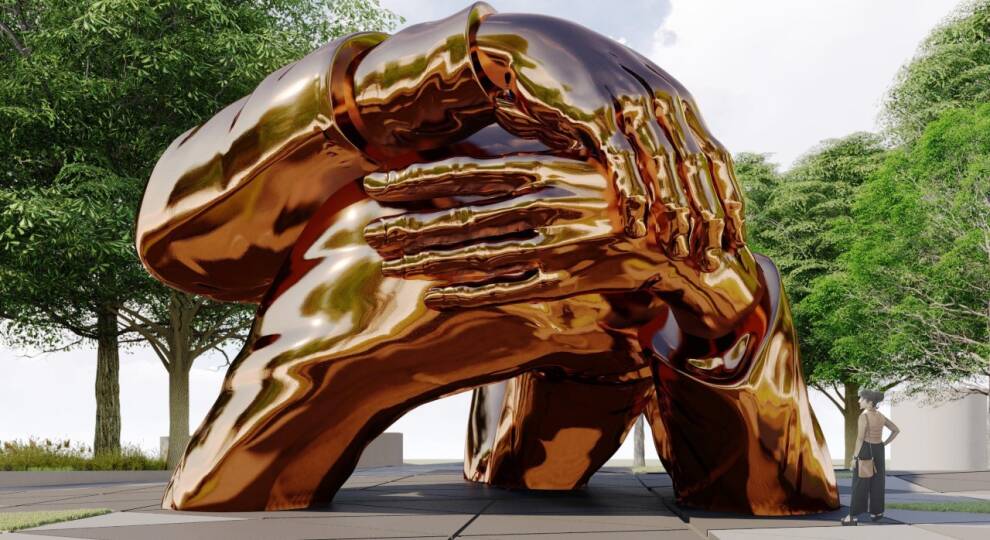 The Embrace symbolizes the hug Dr. Martin Luther King Jr. shared with his wife, Coretta, after he won the Nobel Peace Prize in 1964 and celebrates their time in Boston when they met as students. The Embrace is an important cultural symbol of equity and justice for Boston residents and all those who visit the city and region. It serves as a permanent monument representing the Kings’ time and powerful presence in Boston, a time that helped shape their approach to an equitable society.

The monument was designed by American conceptual artist Hank Willis Thomas and depicts the 1964 photo of the couple hugging after Martin Luther King won the Nobel Peace Prize. Thomas is an internationally acclaimed African American conceptual artist and worked with the MASS Design Group to bring the design to completion. The pieces traveled 3,000 miles from Walla Walla, Washington, to land in their home on the Boston Common’s 1965 Freedom Rally Plaza.

Boston was where the couple met, when MLK was earning his PhD at Boston University and Coretta Scott King was studying at the New England Conservatory of Music. They returned later to march from Roxbury to the Boston Common, the first Civil Rights march in the Northeast.

Born in Plainfield, New Jersey in 1976, Thomas lives and works in Brooklyn, NY as a conceptual artist working primarily with themes related to perspective, identity, commodity, media, and popular culture. His work has been exhibited throughout the United States and abroad including the International Center of Photography, Guggenheim Museum Bilbao, Musée du quai Branly, Hong Kong Arts Centre and the Witte de With Center for Contemporary Art.

His collaborative projects include Question Bridge: Black Males, In Search Of The Truth (The Truth Booth), The Writing on the Wall, and For Freedoms. In 2017, For Freedoms was awarded the ICP Infinity Award for New Media and Online Platform. Thomas is a recipient of the Gordon Parks Foundation Fellowship (2019), The Guggenheim Fellowship (2018), AIMIA | AGO Photography Prize (2017), Soros Equality Fellowship (2017), Aperture West Book Prize (2008), Renew Media Arts Fellowship from the Rockefeller Foundation (2007), and the New York Foundation for the Arts Fellowship Award (2006). He is also a member of the Public Design Commission for the City of New York.

In 2019, Thomas unveiled his permanent work “Unity” in Brooklyn, NY. In 2017, “Love Over Rules” permanent neon was unveiled in San Francisco, CA and “All Power to All People” in Opa Locka, FL. Thomas holds a B.F.A. from New York University, New York, NY (1998) and an M.A./M.F.A. from the California College of the Arts, San Francisco, CA (2004). He received honorary doctorates from the Maryland Institute of Art, Baltimore, MD and the Institute for Doctoral Studies in the Visual Arts, Portland, ME in 2017.

Mark your calendar for the Embrace Unveiling being held this MLK weekend – join the King family, national and local leaders, and partners to come together to pay homage to heroes of the past and present, and to accelerate a collective contribution towards a radically inclusive and equitable world for all.

There are several different ways to be part of the moment.

1. Boston Common on Friday January 13 for the outdoor unveiling – The ceremony will be displayed on large screens positioned near the Parkman Bandstand complete with live DJ and hot refreshments.

2. Have your own watch parties at home or in the office as it will also be streamed live by our media partner NBC10 Boston. Watch live coverage starting at 11 am on NBC10 Boston, ROKU, and Peacock along with live streaming on NBC10Boston.com at www.nbc10boston.com/Embrace