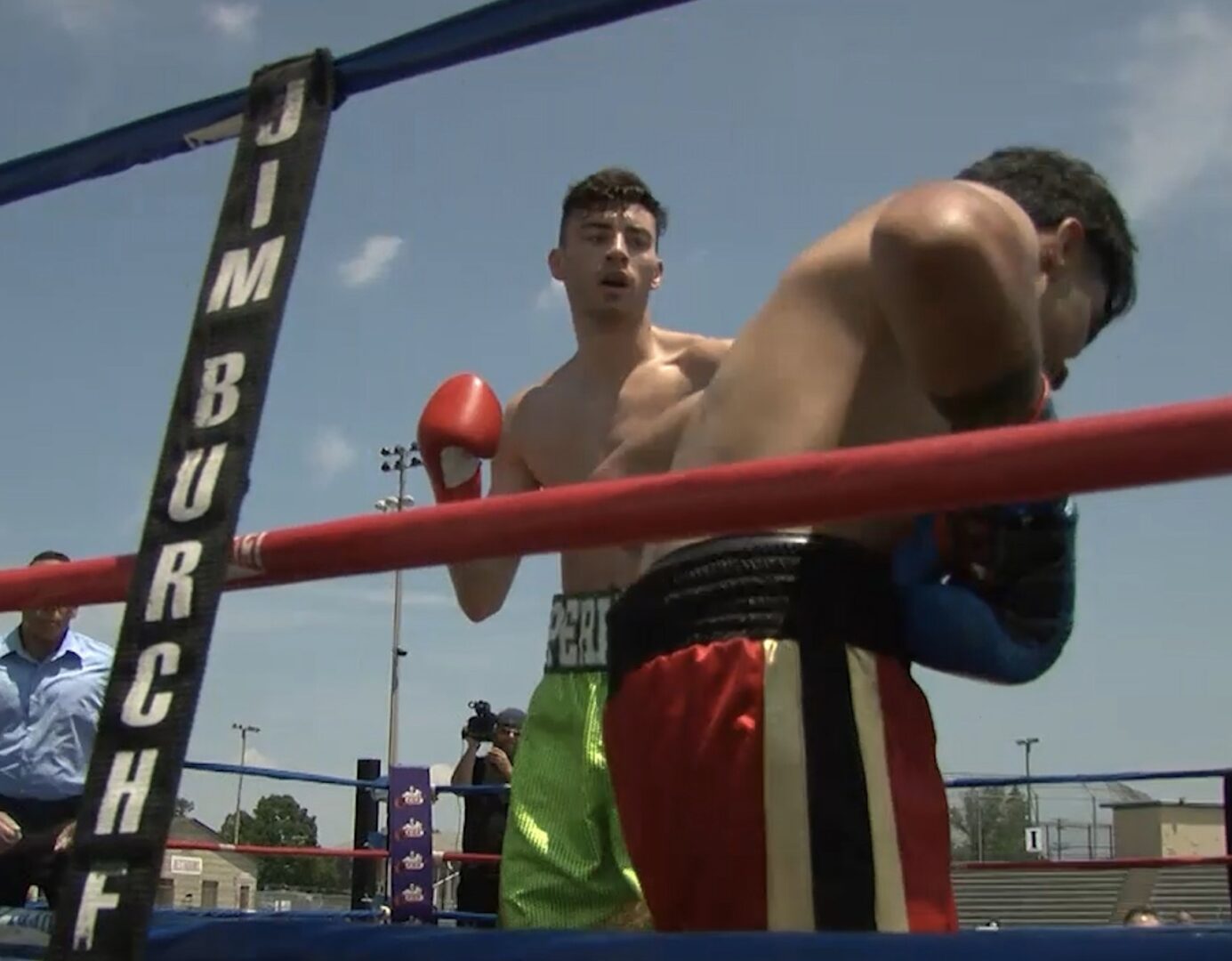 The event was billed as the Thriller at the Stadium! And with that, professional boxing was returning to the Cranston Stadium after 62 years.

Thanks to the Worldwide Pandemic the last time boxing promoter Jimmy Burchfield and his CES Boxing group held a live event was in February of 2020 at the Twin River event center in Lincoln, Rhode Island. To Burchfield and his fighting followers the 16 months off must have seemed like an eternity!

Jimmy Burchfield has become to Rhode Island what Don King was to boxing way back when. Always involved with the sport, Burchfield promoted his first boxing event in 1992 at the Rocky Point Palladium. Since then, he has set up and promoted both boxing and MMA (Mixed Marshal Arts) events all over New England.

The venues have included the forementioned Twin River Casino and event center and the Rocky Point Palladium in Warwick, RI, the Providence Civic Center (now know as the Dunkin Donuts Center) in Downtown Providence and venturing over the state into Connecticut’s Foxwoods Casino and event center. For Birchfield, having the event in a outside setting only seemed to make sense.

Cranston’s Mayor Ken Hopkins, who happens to be a huge sports fan of any sport offered up the historic Cranston Stadium to host this event.

Having this event in an outdoor arena just as the state was getting ahead of the COVID-19 pandemic was a great idea, being outside minimized any risk from the virus, and having it when the warmer weather was kicking in further lowered the risk, and finally Cranston Stadium was a venue where social distancing would not be a problem for the 800-plus spectators who turned out to see the professionals battle it out under the summer sun.

There was the risk that rain could be the only thing that could put a damper on the event, but by the time the bell rang signaling the start of the first bout at 12 noon, the sky was blue, the sun was high and there was not a cloud in the sky!

As for the fights themselves, 6 bouts were to be played out in front of the loud and rowdy crowd. The undercard featured the Super welterweights, Victor Reynoso from Providence, improving his record to 7 wins and 0 defeats by beating Martez Jackson from Georgia. The Super Lightweights division had New Bedford’s Wilson Mascarenhas scoring a Knockout win over Connecticut’s Geoffrey Then, improving his record to 4 wins and 1 loss. In the Light Heavyweight class Cranston’s own Gary Balletto III improved his undefeated record to 2 – 0 with a decision win over William Dunkle who traveled from Boise, Idaho to make his professional debut.

But for the crowd it was the long-awaited return to the ring for Light weight Jaime “Hurricane” Clampitt, a transplant out of Saskatchewan, Canada, who now calls Warwick, Rhode Island home. Clampitt was taking her 25-5-1 record out of retirement to take on fellow Canuck, Olivia Gerula from Ontario, Canada. Their fight ended in a tie and there has been no word if Clampitt will be once again lacing up the gloves or hanging them back up.

The two Main Event fights ended the first half of the day’s card and the professional division. James Perella out of Mansfield, Massachusetts record went to 7-0 with a victory over Gael Ibarra from Douglas, AZ. The next fight was for the vacant WBC USNBC title. Adan Ochoa from Los Angeles, CA improved his professional record to 11-2 as he beat the 14-7-1 Angel Luna from Yamasa, Dominican Republic now living in East Haven, Connecticut. taking the title belt. The afternoon portion of the Thriller at the Stadium concluded, and the professional portion of the days event was done.

The Amateur Boxing card was going to begin later in the day with 11 bouts scheduled but for those results you will have to stay tuned for those results, ahhh cliffhanger! The fact was that the event went off without a hitch! There were no reports of problems whatsoever, the crowds were vocal in there cheering for the fighters they were there to support, and respectful for the ones they did not. The City of Cranston shone, and the statement was made that this will not be the last outside event of any kind in the city! On this day Cranston had a lot to be proud of because they pulled off what many skeptics said that they couldn’t, and they did it with class and style.

The 23-year-old Ochoa (12-2, 5 KOs) wasted no time against Luna (14-7-1), scoring the knockout within minutes of the opening round, staggering Luna with a left hand before sending him through the ropes with an impressive flurry to close it out. The 31-year-old Luna never recovered, and referee Danny Schiavone stopped the bout before he could climb to his feet, awarding Ochoa the victory in his first title bout as a pro.

Ochoa was originally scheduled to fight Worcester’s Irvin Gonzalez, but Gonzalez was forced to withdraw due to an elbow injury. A second opponent fizzled within days, prompting Luna, a Dominican Republic native who now lives and trains in East Haven, CT, to step to the plate for an opportunity to fight for the green and gold belt.

Also on the main card, New Bedford, MA, super lightweight Wilson Mascarenhas (4-1, 1 KO) scored his first career knockout win, stopping the tough Geoffrey Then (1-1) of Danbury, CT, at the 1:31 mark of the third round. Mascarenhas, who has now won four in a row, looked sharp from the opening bell, landing combinations and working the angles to keep Then at bay. Then kept pressing, so Wilson wisely remained patient and began to counterpunch effectively, dropping Then twice in the second round and again at the start of the third before a double left hook – the second one sending Then crashing to the canvas again – finished the fight for good. Then, also a professional Muay Thai and MMA fighter, boxed for the first time since 2019.

Fighting for the first time since 2019, Providence super welterweight won a narrow majority decision over the hard-charging Martez Jackson of Georgia, 40-36, 39-37, 38-38. Peter Hary scored the bout a draw while Bob Paolino and Eddie Scuncio scored it in favor of Reynoso, who used his height advantage to occasionally stall Jackson’s and mixed in an effective jab to control the action. Jackson fought well on the inside and really surged in the middle rounds, but Reynoso boxed efficiently in the final round to seal the win. Jackson dropped to 5-5-3 while Reynoso remained unbeaten at 7-0.

Just over a month removed from his eighth career MMA bout, light heavyweight Gary Balletto III (2-0), a Cranston native, returned to the ring for his second pro boxing bout, taking on newcomer William Dunkle (0-1) from Idaho. Dunkle, also a pro MMA fighter, ran out of gas midway through the scheduled four-round bout, but hung tough against the slick-boxing Balletto, who found his groove early in the fight and effectively out-boxed his opponent to earn a methodical 40-36, 40-36, 39-37 win on the scorecards.

In the finale, Clampitt (22-5-2) and Gerula (18-9-3) staged a back-and-forth war over six entertaining rounds, a fight so close all three judges scored it 57-57. Gerula appeared to come forward more consistently in the middle rounds, while Clampitt finished strong in the fifth and sixth, showing no signs of fatigue despite boxing for the first time in eight years.

The 42-year-old Gerula, a native of Winnipeg who now trains out of Las Vegas, fought to a draw for the third time in her career and first time since 2003, coincidentally against Mia St. John, whom Clampitt defeated in 2007 for one of her four world titles. Clampitt last boxed in 2013, defeating Dominga Oliva, and returned Saturday at the age of 44, also fighting to a draw for just the second time in her career and the first time since 2004. The two lightweights never let up from the opening bell, each rallying at various points in the bout to grab control of the momentum.

Highlighting the preliminary card, Mansfield, MA, welterweight James Perella (7-0, 5 KOs) made quick work of Mexican challenger Gael Ibarra (5-4), stopping his opponent with a body shot at the 1:21 mark of the opening round.