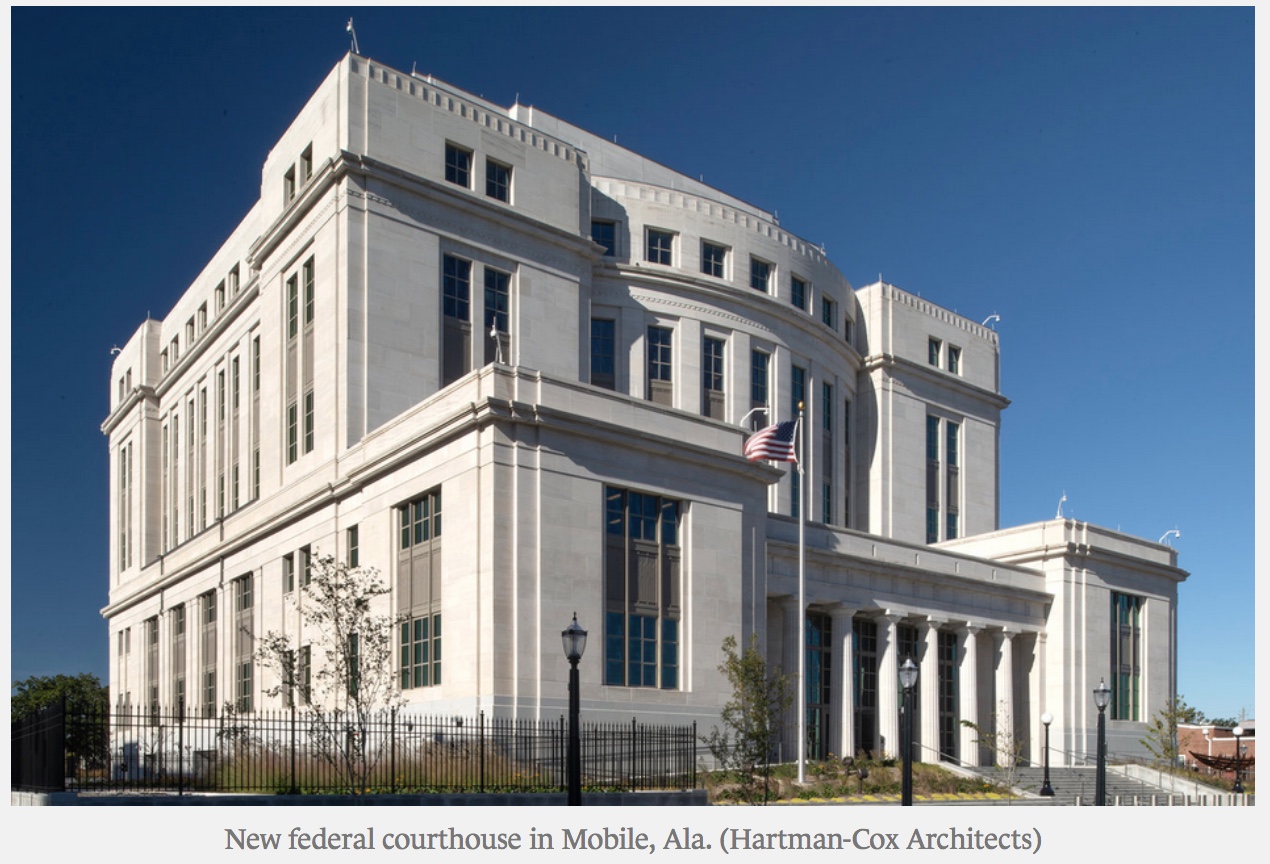 A yearning for beauty is finally breaking through

Animal Spirits of the E.O.

The General Services Administration, which designs, builds and maintains all federal buildings, has issued a pair of RFQs (Request for Qualifications) for architects to design two federal courthouses, one in Ft. Lauderdale, Fla., and another in Huntsville, Ala., in a “classical style.”

Does that mean that the proposed White House executive order known as “Making Federal Buildings Beautiful Again” has been signed by President Trump and has now gone into effect? I wish, but no, alas, as of this writing that has not happened. In fact, the RFQ for the courthouse in Huntsville was issued last year. The unsigned E.O. was leaked to the press in February.

Nadine Post raised the alarm in a recent issue of Engineering News-Record (“Conflict Heightens Over GSA’s New Design Criteria”). I wish. The journal’s headline writer might have slightly overstated the case.

Nevertheless, Rep. Dina Titus (D-Nev.) has proposed legislation to block the E.O. should it ever go into effect, and has written an angry letter to GSA Administrator Emily Murphy, a Trump appointee who was unanimously approved by the Senate in December 2017. The language of Representative Titus’s questions about the RFQs was apparently lifted from the American Institute of Architects’s misleading denunciations of the E.O., phrases that enunciate a false narrative about the proposal for a new classical mandate that denies the existence of a modernist mandate in effect since 1962.

For several decades after the “guidelines” warning against an “official style” went into effect, there were no federal buildings that did not embrace AIA and GSA modernist preferences. A few classical courthouses, maybe two or three, have arisen in the past decade in Tuscaloosa, Ala. (bottom of post) and, more recent and less well known, in Mobile, Ala. (top of post). They are exceptions that prove the rule. (Is it the water in Alabama?)

So, if Trump has not signed the E.O., what is behind these recent and proposed classical courthouses?

Could it be that popular yearning for beauty is finally breaking through at the GSA? Perhaps architecture, as a field, is mimicking the “animal spirits” of the economy, which started to gallop well before Congress passed the tax and regulation cuts that Trump promised during his presidential campaign.

Critic Catesby Leigh, in a lengthy City Journal essay published in 2019 before the controversy over the E.O. emerged, describes in detail the disaster that resulted from the GSA guidelines, which were originally written by Daniel Patrick Moynihan before he became a U.S. senator from New York. By 1970, Senator Moynihan himself came to regret their dolorous impact on federal design, whose decline he said was followed by an equally regrettable – and predictable, classicists would add – decline in respect for federal authority in society as a whole. So amply illustrated of late.

Maybe it is not too late to reverse course and reject ugliness for beauty.