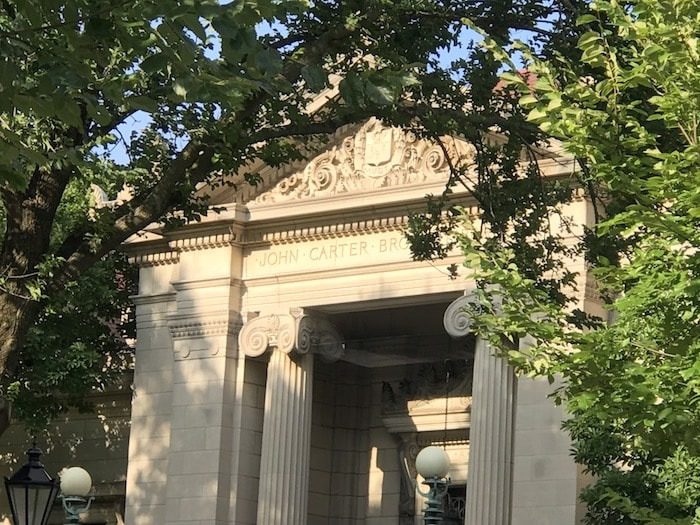 A mere moment of beauty

…local leaders have absolutely no idea what they are doing. So, enjoy our beauty while it lasts.

A mere moment of beauty

These two shots of the John Carter Brown Library on the College Green of Brown University were taken as my son Billy and I paused on College Hill, waiting for Victoria, his mother and my wife (whose birthday is today), to call back and tell us where to go. We were heading east on George, looking for a good place to stop and wait for the call. So, we stopped at George and Brown on purpose so we could look at the library. We had a few moments to spare – and we decided to spend them in the company of beauty.

We could have chosen another spot from among many immersed in beauty on College Hill, but the John Carter Brown Library is not only beautiful but courageous. Whatever might be said about John Carter Brown (1797-1874) – grandson of the namesake of the college – the building itself, designed by the Boston firm of Shepley, Rutan & Coolidge and finished in 1904, committed an act of aesthetic bravery: the library’s board of directors commissioned the Washington, D.C., firm of Hartman-Cox to design an addition that respected the original building’s Beaux-Arts design.

The addition, named by donor Finn Caspersen ’63 to honor his parents, uses a slightly muted version of the elder building’s classicism to express the young building’s respect for the old building. At a time when architects usually design additions to reject a building’s style (implicitly rejecting the institution’s character), the library, its board and its donor directed Hartman-Cox to embrace rather than reject the idea of using architecture to reflect respect for the institution. By the way, the John Carter Brown Library, while on the Brown campus, is not part of Brown University – which may explain the library’s ability to get away with such aesthetic audacity.

So, the library’s board, its donor, and its architecture did more than just display respect for the library, it also showed respect for generations of citizens of Providence, including Billy and me. Today, Brown University, the city of Providence and the state of Rhode Island have refused, again and again, to show such respect. Sadly, there are fewer and fewer places in Roger Williams’s city where citizens can stop and cherish places that use beauty to express respect for the founder’s idea of soul liberty, and whatever else is good and noble about Rhode Island and its history. And local leaders have absolutely no idea what they are doing. So, enjoy our beauty while it lasts.

Read more from David Brussat on his blog, www.architecturehereandthere.com