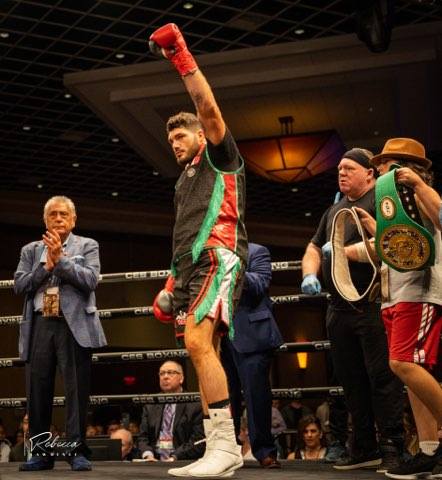 A Knockout of a Night – by Brendan Higgins

It was a night filled with excitement at Bally’s Twin River Casino, as Jimmy Burchfield, and CES, delivered an action-packed evening of professional boxing. Miranda Reyes shocked the boxing world scoring an eight-round unanimous decision over Jaime Clampitt-Hayes, in front of a capacity crowd. In the other six bouts, four of them ended in first round knockouts.

In the opening contest, James Maner, of Providence, improved his record to 2-0, dropping Dan Bunyon (now 0-2) in the first round.

Impressive heavyweight Sean Bay, also of Providence, destroyed Elder Gama, of Mexico, with an impressive first round knockout. Bay landed a devastating left hook sending Gama through the ropes crashing on to the judges table at ringside leaving them with nothing to score.

In the fourth fight of the evening, Alejandro Paulino of New London, scored yet another first round knockout over Aldimar Silva from Brazil. Paulino improved his record to 10-0, with 9 KOs. Silva fell to 22-20.

Francis Hogan, of Weymouth, was one of the heavy crowd favorites. He was making his CES debut. He came to the ring with bagpipes adding a nice touch to his entrance. His opponent, Rodrogo Lopes Rodrigues, from Brazil, gave Hogan everything he could handle. This was a back-and-forth fight for the entire six rounds. The judges awarded a unanimous decision to Hogan who ran his record to 11-0, with 10 knockouts. Rodrigues fell to 8-3.

In the semifinal bout, Juiseppe Cusumano, of Providence, scored a first-round knockout over Irineu Beato Costa Junior. Cusumano improved his record to 20-4, with 18 coming by knockout.

In the main event, super featherweight Miranda Reyes of Houston, Texas, defeated Jaime Clampitt-Hayes of Warwick. From the opening bell Reyes came at Clampitt-Hayes with bad intentions. She caught everyone in attendance off guard with her aggression. She was not afraid of the moment. She was not intimidated by her Hall of Fame opponent. Clampitt-Hayes also looked sharp the entire fight. Jaime appeared to be in top physical condition. From my vantage point neither fighter was ever hurt or in any real trouble. They exchanged punches the entire eight rounds. When the fight was over, I thought it was a draw. The judges, however, saw it a different way and awarded the decision to Reyes.

In the ring, after the fight, Reyes said ‘I did it for H-Town’ referring to her hometown of Houston. She jumped into the air when the decision was announced. Jaime clapped for her opponent. She also said, ‘I’m so proud of Miranda right now.”

Jaime is not one to make excuses. She never has and she never will. Going into this fight, there was literally no video footage of Reyes to review. This young, talented fighter came to Rhode Island as a gigantic question mark. There was no scouting report on her whatsoever. For Reyes and her camp, there was an entire library of footage to watch on the four-time, Hall of Fame, world champion. In my opinion nothing was settled in this fight. I believe if the two were to fight again the outcome would be very different. Going into a fight with no information on your opponent is not what anyone wants. The fight is in the past now. From what I know about Jaime Clampitt-Hayes, she is going to take all the positives from this fight and leave the rest in the ring. When Reyes landed in Rhode Island, nobody knew who she was. By the time she left, everyone knew exactly who Miranda Reyes is.

Jaime had this message for her fans. “Every opportunity to step back in the ring is a blessing. Although I’m disappointed with the loss, it’s the losses that motivate us and push us to come back even stronger. I have so much respect for Miranda and her team. Miranda is no doubt a great boxer with a bright future. I want to thank everyone who came out and supported me. We are not done yet.”

From what I have come to learn about Jaime “The Hurricane” Clampitt-Hayes, she will be back with a vengeance. She is not ready to pass the torch to anyone just yet.

For more information on CES Boxing and MMA, visit cesfights.com.