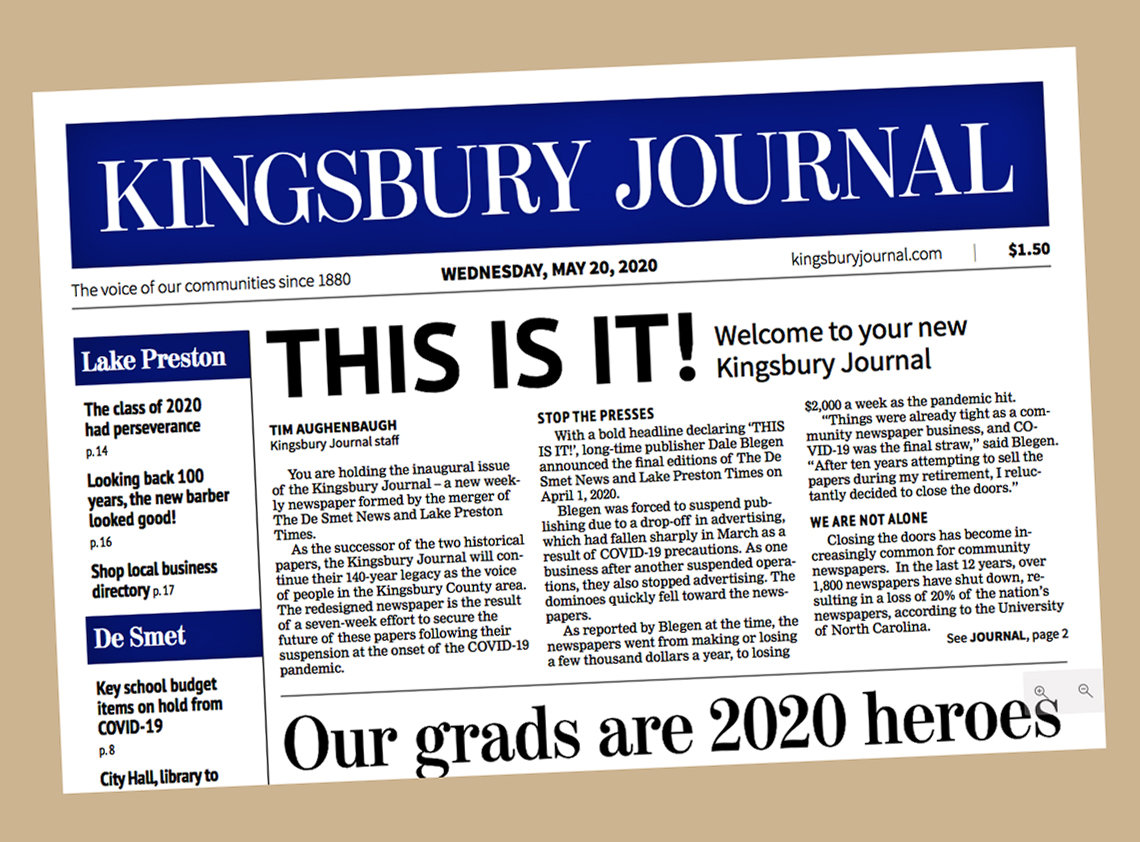 Image courtesy of Creative Circle – The inaugural issue of The Kingsbury Journal, published on May 20, merged two community weeklies in South Dakota in an effort coordinated by Creative Circle Media Solutions.

How Creative Circle Media Solutions, a local company based in East Providence, stepped in to save two small town weekly newspapers in South Dakota

Editor’s Note: In this time of coronavirus pandemic, one of the many casualties has been the news, with many news gathering enterprises forced to cut back on staffing and to furlough reporters, as advertising revenues have plummeted with the closing of businesses and the loss of jobs by thousands of employees.

The cutbacks, layoffs and furloughs are part of a larger trend of corporate consolidation in the news industry, as local ownership dwindles. Here is a good news story to share about the efforts of a Rhode Island company to stem the tide of news deserts and support local ownership.

As Bill Ostendorf, the president and founder of Creative Circle Media Solutions, described it, “The communities rose up to save their paper. They bought the buildings and the papers and gathered up a band of volunteers to produce it. Only they had no idea how to do it all. So they called us. And we volunteered to help them get it done.”

The goal, according to Ostendorf, is straightforward: “We hope to help eliminate more news deserts across America through local ownership.”

The following story was put together in the form of a news release by the Creative Circle Media Solutions teams, but it seems to be an appropriate good news story to share.

EAST PROVIDENCE – Two small, rural towns in South Dakota are battling to save their newspapers, and Creative Circle has stepped in to help.

The De Smet News and The Lake Preston Times – have a combined weekly circulation of about 1,900.

On April 1, Dale Blegen, the long-time owner and publisher of the papers, announced with the headline “This is it!” that he was calling it quits and closing the papers. He had hoped to retire at 65 but was still at it 10 years later. Unable to sell the papers, he just kept going to serve his communities. But he felt the COVID-19 crisis was the last straw. The papers were profitable, but any significant drop in advertising meant he would be operating at a loss and running up debt.

The community was stunned and surprised by the announcement. They had no warning. The papers were the oldest institutions in their communities. And suddenly the community realized that their communities just weren’t the same. The De Smet Development Corporation took up the issue and started researching some options.

The spread of ‘news deserts’
Sadly, this is a common problem. There are “news deserts” spreading across America as towns and communities are losing their local papers.

As they dug deeper in an effort to see if there was some way to put together a plan to rescue the papers, the group realized that publishing a newspaper was a pretty significant undertaking.

They calculated that it takes about 250 person-hours every week to report, sell, produce and print the local papers, which only averaged about eight pages each. “We had no idea. We had never thought about what went into our local paper,” said Tim Aughenbaugh, a member of the development board leadership. “A lot of us were amazed at what a treadmill running a weekly paper can be. That was a revelation.”

The team started investigating different parts of the puzzle. They talked to the paper’s printer and other publishers in South Dakota. They reached out to the press association for information. They searched the Internet for examples of communities saving their newspapers.

Creative Circle had helped community leaders in Pittsfield, Mass., when they bought their local daily and three Vermont weeklies from a hedge fund-backed chain. They were frustrated watching the dramatic decline in The Berkshire Eagle and wanted to restore the paper to the top-notch local publication it had been under local ownership. Creative Circle redesigned the paper, advised the ownership group and provided web hosting, design and software. Creative Circle had the software and expertise Aughenbaugh thought could help.

And Ostendorf was receptive to the cause. “I hate to see any loss of locally produced newspapers,” said Ostendorf. “I really believe that newspapers should be locally owned or family-owned, because newspapers need owners who give a damn about their communities.”

Ostendorf had also been actively seeking funding to fill in rural news deserts by building web sites for some of America’s smallest papers – many of which had never had one before. “We estimate there are roughly 200 small, rural newspapers like these which have never had a web site and we’ve been seeking funding for a plan to offer free web sites to these papers – along with appropriate training – to help them survive and give them the option to go digital rather than close down.”

Hard row to hoe
Ostendorf offered to help in any way he could – building web sites, redesigning the papers, training the staff or even producing the papers for a few weeks, if necessary. While he couldn’t completely donate his company’s efforts, he was willing to do whatever it took now and worry about getting paid something later. He also said he’d do the work for whatever the communities could afford.

But Ostendorf was blunt about how difficult this would be. Training a bunch of volunteers to put out a newspaper was no simple task. Another problem that the team faced was that they had a deadline. The papers had to publish again by May 20 or risk losing their postal permit and critical legal advertising. That was just over three weeks from the first call to Creative Circle.

Soon they had pieces they could put together with a plan and maybe, just maybe, save the papers.

The De Smet Development Corporation reached out to the Lake Preston Development Corporation and the two groups purchased the papers and their facilities. After leading town meetings to explain the plan to their communities, initial volunteers began to step forward. Each paper will be set up as a community organization to benefit their communities.

While they would start off with volunteers, the goal would be to pay those volunteers a percentage of any profit – hopefully reaching the point where the “volunteers” would be fully paid – or a least they could essentially pay a couple people to lead the effort every week.

The papers were profitable before COVID-19, so as long as payroll is an option, not an obligation, the groups felt the model could work.

The development boards would also be open to essentially license the paper to a professional who would run them and benefit from any profit they generate.

Redesigning the newspapers
Ostendorf’s team at Creative Circle will redesign the papers with an eye toward making production easier and faster. One paper is currently a broadsheet while the other is a tabloid. The decision was made during the redesign process to combine the papers into a single publication with a new name and a tabloid format. It would be the Kingsbury Journal, Kingsbury being the county where both papers are located.

Creative Circle will also produce the first issue entirely, taking the next 3-5 weeks to gradually shift production back to the volunteer team.

Volunteers will get a training program from Creative Circle involving everything from how to write interesting stories to how to take better pictures and write headlines, in addition to InDesign and layout training.

Meanwhile, Creative Circle will launch web sites for both papers that will allow community members to contribute content. The web sites will take classified ads online, serve as the circulation database and payment system and provide an archive for editorial content moving forward.

The group hoped to reduce the 250 hours it takes to produce the papers each week by 30 percent with the redesign and new technology provided by Creative Circle. The web sites should also generate some additional revenue.

The future of newspapers
“I’m hoping with some publicity, maybe the teams in De Smet and Lake Preston can get some more help with a grant or maybe some volunteers or even an editor might hear this story and want to take on this challenge,” said Ostendorf. “And I’m thrilled to help any community take back its newspaper. This is the future of newspapers. These big, venture groups who own most newspapers in America now will eventually fall apart and communities will need to rise up and pick up the pieces. I want to help develop models that will allow newspapers to return to local ownership.”

“You can’t say enough good things about people like Dale Blegen, the former owner, and other local owners who are passionate about helping their communities,” said Ostendorf.

“He served these communities for 43 years and was only the third publisher of the papers, which date back to 1885,” Aughenbaugh said. “Every birth. Every wedding. Every death. Every win. Every loss. If he and his employees had not been here there would have been no record of any of it.”

And now, this role is passing on to the communities themselves and their band of volunteers and helpers. “It has taken a team effort to get us to the point where we have a believable plan. But that plan needs to be executed and it is only going to be successful if both of our communities get behind it,” said Aughenbaugh.

“I’m optimistic. I don’t underestimate the challenges we have here. But we don’t see another way to do this,” he said. “If we don’t figure this out, there will be no record of our lives or our communities.”

While people who work at newspapers are always rooted in the present – in getting out this week’s paper and running on that endless treadmill, “the reason for communities like ours to have a paper is really for the future,” he said. “Making our communities better. Engaging people in discussions. Without the paper getting people involved now in helping us think about our future, every plan and every effort is just scattered. It’s the paper that brings focus and brings people together and makes the community better.”

So, it really is an appropriate role for the development boards to take on.

“But there is also a bigger cause here that’s worthy,” he said. “Communities like ours need our newspapers.”

Editor’s Note: For purposes of transparency, Creative Circle Media Solutions is the web-hosting firm for ConvergenceRI.