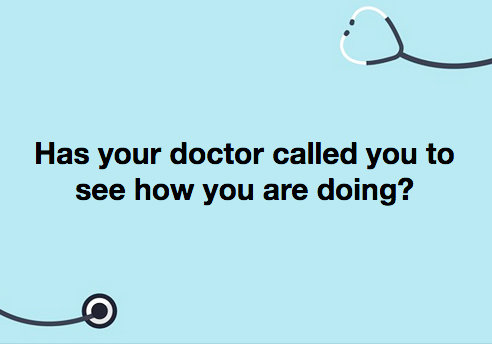 What does it mean these days when the doctor is calling?

Where do news stories come from? Many times, they are driven not by news releases and press conferences but by the daily mundane experiences of life that pique curiosity.

Such was the case for Nancy Thomas, the editor of RINewsToday, when she received a call from someone who said she was with Blue Cross and Blue Shield of Rhode Island, asking how Thomas was doing.

Thomas responded by wanting to know a little bit more about the caller: it turned out the telephone questioner was not directly an employee of Blue Cross, but rather, a third-party vendor, calling to check in on how Thomas was doing.

What is the old adage? Curiosity killed the cat and satisfaction brought her back. Thomas asked around and began to discover that she was not alone in receiving such phone calls from physicians and insurers. A doctor had called her ex-husband, they had chatted for 15 minutes, talking about politics among other things. The ex-husband didn’t think too much about it until he received notification that under his health insurance policy he had been charged $125 as a co-pay for the “telehealth” visit with the physician. [When he complained that he didn’t ask to be called by the physician, and refused to pay the bill, the physician apparently told him he should not have been billed for a co-pay, the insurance company would be picking up the cost.]

In turn, Thomas urged ConvergenceRI to do a story. “It’s a good story,” she said.

Youth wants to know
Thomas posted a question on her Facebook page, asking: “Has your doctor called you to see how you are doing?” The responses were quick and numerous . In a day, nearly 50 different people responded to say that they had received phone calls, mostly from their primary care providers, checking in to see how they were doing and if they had any concerns.

Many of those responding on Facebook seemed to like the idea of their physician checking in with them. Some reported that there had been no charges for the call [that they knew about].

Once prompted, ConvergenceRI remembered that he had received a call from the physician assistant from his primary care physician, checking in to see if he needed anything or had any concerns. At the time, it had struck ConvergenceRI as a bit odd, given that it was the first such call in the last year.

What is driving the calls?
The larger question is: What was driving the calls to patients from physicians and primary care providers? Was it a result of an outreach effort to check in with patients during a time of coronavirus pandemic, as a kind of “best practices” strategy? Or, was it being driven by the ability to recoup some of the lost revenues as a result of the forced shutdowns, when regular visits had been abandoned? And, were the calls a result of new insurance regulations that allowed reimbursements to physicians and providers to conduct the phone calls under the new telehealth waivers?

ConvergenceRI reached out late last week to both the R.I. Office of the Health Insurance Commissioner and Blue Cross and Blue Shield of Rhode Island to find out the answers, if possible, to the questions. A representative from Blue Cross responded immediately, saying that she would look into it. Stay tuned.

Reaching out to touch someone
A new public service announcement hit the airwaves this weekend, urging people to get the medical care they need, according to a story in The Providence Journal.

“We absolutely have room for you,” said Miriam Hospital chief medical officer Dr. G. Dean Roye, one of the doctors featured in the PSA, in an interview with reporter Brian Amaral.

As hospitals have begun to do elective procedures again, roughly one-third of patients have signaled concerns about coming back, according to Roye, as reported in the story.

The PSA was produced in collaboration with the R.I. Executive Office of Health and Human Services, the Hospital Association of Rhode Island, and the acute care hospitals, according to the story. The TV PSA was recorded at Lifespan’s video production facility and local TV stations were being asked to run the spot on a pro bono basis.

Changing behaviors
What is unclear is how, in a post-pandemic world, patient behaviors may shift after their experiences with telehealth, as texting platforms and virtual visits have changed the nature of the conversation between providers and patients.

To read the article in full, go to: