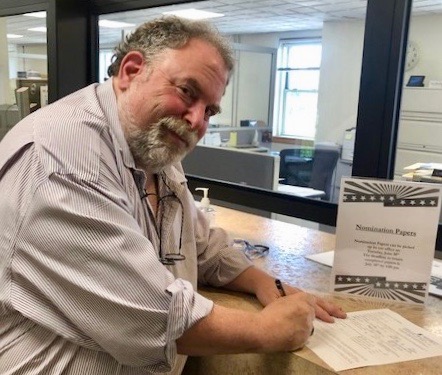 Herb Weiss today announced major endorsements of his candidacy for State Senate. Weiss is running in the Democratic Primary to fill an open seat that is being vacated by State Senator Donna Nesselbush. He is a featured writer on aging with RINewsToday.com.

Herb Weiss said. “I am honored by the enthusiastic support I am receiving from people who know that I will put Pawtucket and North Providence first, fighting to ensure we get our fair share of state economic development and other resources. This is all the more important because of the tough challenges we face as a result of the Covid-19 pandemic and the severe economic contraction it has brought about.”

“Herb will bring energy and fierce determination to Smith Hill on behalf of District 15 and the City, and his tenacity will reap benefits for all of our residents from day one,” said Councilman Barry.

Mary Bray, Chair of Pawtucket’s Democratic City Committee said, “I have known and worked with Herb Weiss both on the Democratic City Committee, as well as, on city projects. Herb always has the city’s best interests at heart and will work tirelessly on any task for the betterment of the community. Herb will certainly be an asset to Pawtucket’s legislative delegation,”

Representative Mary Duffy Messier continued, ” Herb Weiss has worked hard for the City of Pawtucket for many years. I am confident he will continue to work hard for Pawtucket, representing District 15 in the Rhode Island Senate.”

Former Rhode Island Attorney General Peter Kilmartin said, “There is no doubt in my mind that Herb’s tenacity and ability to network individuals and businesses together has significantly contributed to the rise of the artistic community and economic growth of Pawtucket.  More importantly, he also knows there is more work to be done and wants to continue to build on the foundations helped install over the past twenty-plus years.”

As Pawtucket’s Economic and Cultural Affairs Officer, Herb Weiss spearheaded the initiative to bring artists and small businesses into the city’s numerous mills and worked to make the Pawtucket the Pawtucket Arts Festival the big success it has become. A noted and committed advocate for older Americans, Herb Weiss has called attention to the issues facing seniors here in Rhode Island and throughout the nation, winning AARP’s Rhode Island’s Vision Award.