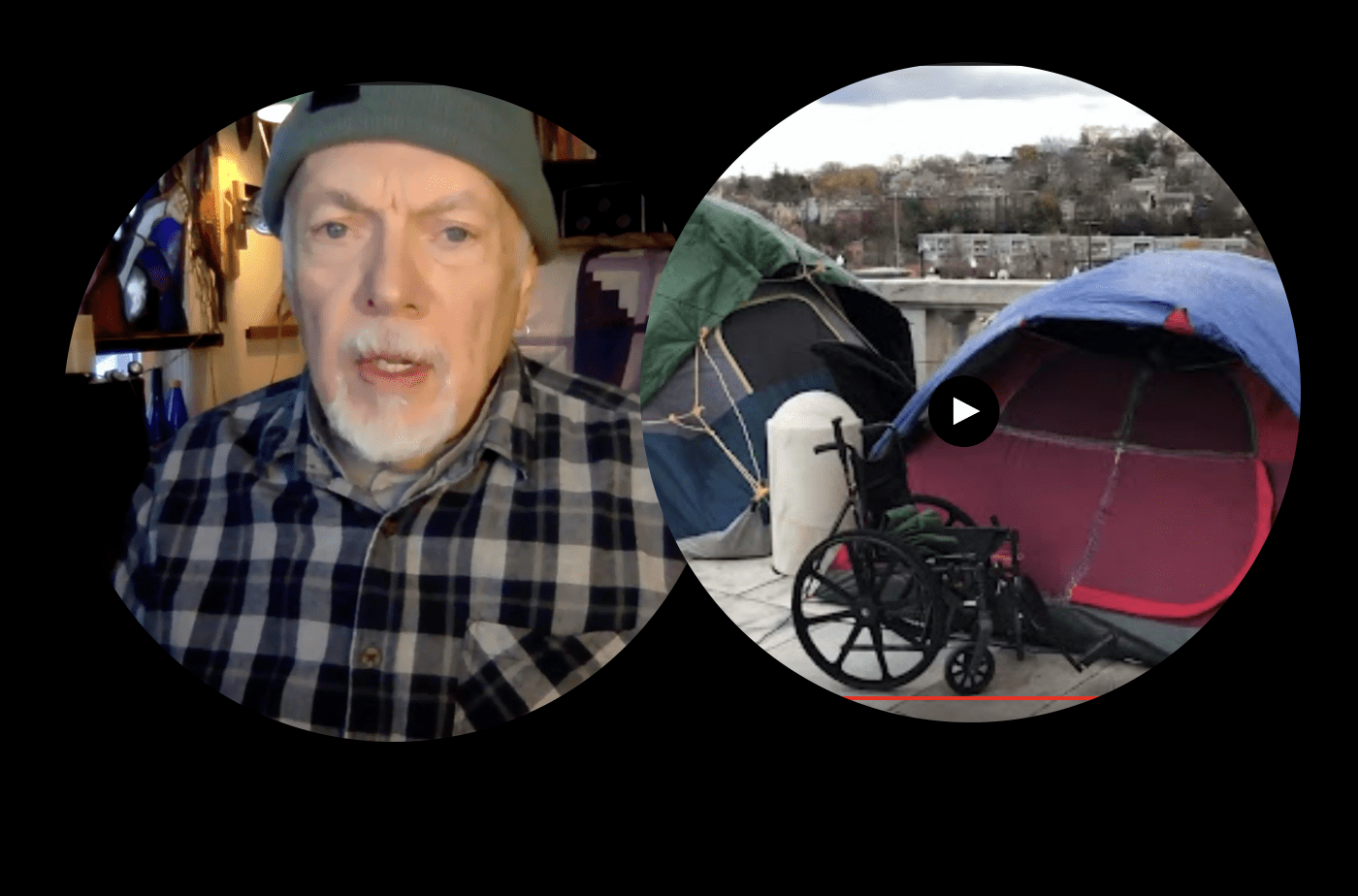 With 50 mph winds expected to begin late this afternoon and continuing into the night, the RI State House will host the Governor’s tree lighting with festivities of song, music, and even a reading of the Night Before Christmas. This will take place inside the RI State House, feet away from the homeless encampment on the grounds of the Smith Street entrance side.

Duane Clinker, an advocate on behalf of the homeless, and Pastor of the Mathewson St. United Methodist Church, sent out a video reminding everyone in Rhode Island that the RI State House is “the people’s house” and as such all the people are invited, including those living outdoors and facing a homelessness crisis – here is his message – where he reminds people of the miracle of Christmas and the message that while it’s been 2,000 years, there’s still no room at the inn – or for the increasing numbers of homeless in the state”.

“The holiday season is the most festive time of year, and the State House Holiday Celebration and Tree Lighting is one of the best ways for Rhode Islanders to come together and spread holiday cheer,” said Governor McKee. “My family and I are excited to join Rhode Islanders from all 39 cities and towns at the State House to enjoy a night filled with holiday merriment, celebration and cheer, and fun, family entertainment as we kick off a happy holiday season.” The event begins TONIGHT at 5pm. Tree lighting is set for approximately 6:15pm.

“Rhode Island is starting this season of giving by remembering those that gave everything for our country and by giving back to those in need,” said Lt. Governor Sabina Matos. “I can’t wait to see the State House rotunda lit up with the warm glow of the holiday lights and to hear carols in the halls!”

After the tree lightiing, the Governor and First Lady will read “The Night Before Christmas.” Billy Gilman, Cranston High School East, Saint Raphael Academy, Wilbur & McMahon School, and “The Governor’s Own” 88th Army Band will perform.

The traditional Heroes Tree with handmade decorations in tribute to Rhode Island’s fallen service members – will be on display. Santa and Mrs. Claus will be available for pictures with children, and families are advised to bring their own cameras for pictures.

Attendees are asked to bring an unwrapped toy to “Fill a Cruiser” with the Rhode Island State Police. Toys will be donated to a variety of local charities for distribution to children in need. Every child who donates an unwrapped toy to the Holiday Celebration will be entered into a raffle to win a prize.

Other Developments on the Homeless issue – Pawtucket Update:

From office of Mayor Grebien:

“The State has contracted with the private owner of the former Memorial Hospital site to have Amos House operate a family shelter. They had an original agreement and have since modified the agreement. The families were originally housed in the facility on an emergency basis because of the need last year. Secretary of Housing Josh Saal and Amos House would have the specifics.

The City is aware that there currently aren’t any families housed in the facility due to a major water leak. Our understanding is that these issues are being addressed.

As for your question on 1139 Main Street, we appreciate the Pawtucket Housing Authority’s partnership and believe the information you have from Paula is the most up to date. The City still believes that this is the best option.”

Multiple attempts to reach Eileen Hayes, director of Amos House, have gone unanswered. We attempted to learn about the expansion they have announced of their Memorial Hospital program from serving 30 families to serving 60 families, as mentioned in the interview, below. Given the damage, Eileen has said they are “waiting for the building to be sealed” – but no response to clarify what that means and where the families are now. WPRO reports families were moved to an extended stay hotel in Warwick.

Here is her interview with Joe Paolino, Jr. from ABC6’s In the Arena this weekend:

Last year, when Pallet Shelters were going to be installed in Pawtucket, an option that would provide them with electricity and heat was to build them INSIDE a building – going forward with that plan Pawtucket Housing purchased a building at 1139 Main Street. However, we have been told that the fire department would not approve the plan, saying it had inherent fire risk. The plan was scrapped, the little houses were never purchased, and the building remains empty.

Earlier this year Pawtucket Housing told RINewsToday that it has offered it up as an emergency, temporary solution to the state due to the immediate crisis for shelter, and that the state “has not responded to our offer”.

Statement from Paula McFarland Pawtucket Housing: “Thank you for following up regarding an update on the 1139 Main Street building. The Pawtucket Housing Authority has continued working alongside the City of Pawtucket as we try to provide adequate options for the State to address our homeless population here in the city. As the weather continues to drop, this becomes more and more urgent.

Last week 5 warming centers were opened in Pawtucket – including the Pawtucket Police headquarters lobby remaining open to all in need 24/7, 7 days a week. While some have come in for the “warmth” only 1 or 2 have spent the night. One Pawtucket official said people might not be able to get there easily from Providence or even know that the station is offering this for the immediate crisis.