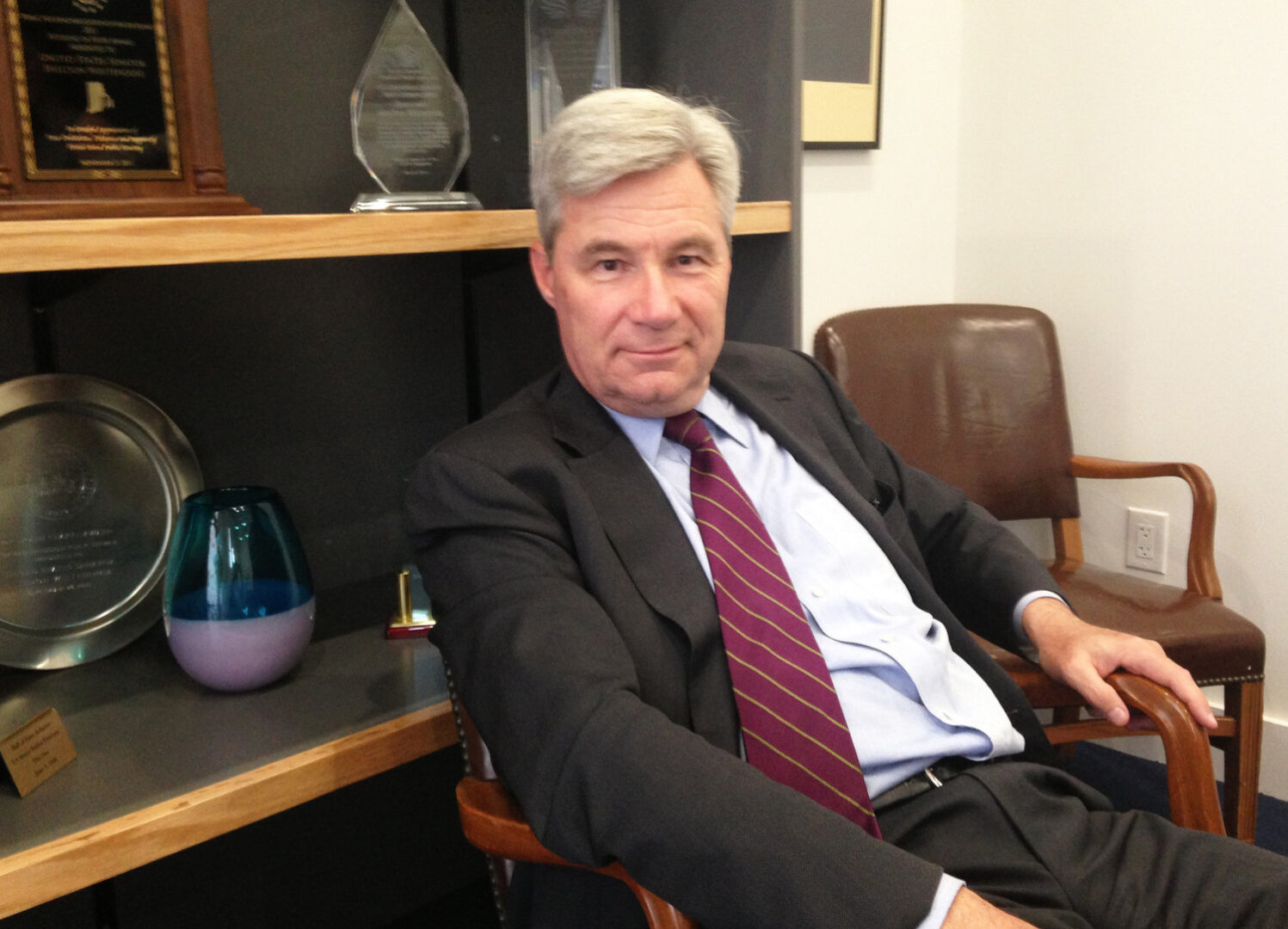 The future of telehealth in the delivery of health care

An interview with Sen. Sheldon Whitehouse about the future of telehealth in the delivery of health care

There are no maps and charts to tell us where to go or what paths to take as Rhode Island and the nation attempt to plot a course toward recovery into a post-pandemic world, even as the virus continues to plague our lives.

We have been rocked by a disrupted economy and massive unemployment, and our consumer economy, driven by algorithms and convenience, has fallen apart. Our hospital-centric health care system is being kept afloat by massive infusions of federal dollars to keep it from crashing. Nursing homes, a critical component of the health industry’s continuum of care, have become Petri dishes where the coronavirus has claimed most of its victims, ravaging the residents in these congregate care settings.

Indeed, where we might be located on the road to “recovery” seems to depend more on political shibboleths than on scientific fact. The number of new coronavirus cases keeps peaking day after day in states such as Arizona, Florida, Alabama, Oklahoma, Texas, Georgia, South Carolina and North Carolina, as the virus pays no attention to the wishful thinking of some governors. It is not testing that gives us new cases; it is the virus. [“Our ICUs were not full because we were testing,” tweeted Dr. Megan Ranney, “Our hospitals were full because we had crossed the Rubicon, and people were SICK.”]

What is required is improvisation, something that government is not often skilled at. It also requires listening, particularly to those in the community, also a skill that is often lacking in many quarters of government, where top-down solutions, as envisioned by corporate leaders and CEOs, often hold sway.

One such improvisation in the time of pandemic has been rapid adoption of telehealth, both at the state and national level, as a way to keep patients and providers talking to each other when in-person visits have not been possible.

In Washington, D.C., Sen. Sheldon Whitehouse recently touted his role in a bipartisan effort calling for permanent expansion of telehealth beyond the coronavirus pandemic, citing the fact that telehealth use among Medicare beneficiaries has been up more than 11,000 percent over six weeks, a remarkable number.

Here in Rhode Island, ConvergenceRI has attempted to keep track of ongoing improvisations in the use of telehealth, which has been expanded under executive order by Gov. Gina Raimondo through the end of July. [See links below to ConvergenceRI stories, “From a novelty to a necessity,” “Learning to listen in 10 different ways,” “We are human, battling an inhumane disease,” and “In a time of pandemic, CODAC revamps its delivery model.”]

ConvergenceRI reached out to Sen. Whitehouse, who has been in the forefront of leading Democratic efforts to keep the cash flowing to Rhode Island, along with the rest of the state’s Congressional delegation, to talk about innovations and improvisations in health care in a time of pandemic. Here is the interview, conducted via email.

ConvergenceRI: How has the use of telehealth fundamentally changed the way that health is being delivered, in your opinion?
WHITEHOUSE: The COVID-19 pandemic accelerated a long-overdue transition to telehealth, and there’s no going back now that patients and providers are comfortable with it.

Telehealth is a convenience for doctors and patients, and brings health care within reach for people with physical disabilities or other circumstances that make getting to a doctor’s office difficult.

It has the potential to improve health outcomes and lower costs. Especially during the pandemic, patients are happier knowing they can get basic care from the safety and comfort of their homes, and compensation for providers’ time helps offset lost revenue from office closures.

ConvergenceRI: There are currently a number of different texting software platforms being used in Rhode Island, including one developed by Healthcentric Advisors and being used by Coastal Medical, one developed by Survey Monkey being used by the R.I. Department of Health, and a third being used by Providence Community Health Centers. I am sure that there are more in the mix, too.
Currently, there appear to be no standards or regulations governing interoperability when it comes to data texting software platforms. Is that a function that belongs to the state, or does it require federal regulation? Is that something that the R.I. Office of the Health Insurance Commissioner might become involved with?
WHITEHOUSE: Congress passed the 21st Century Cures Act in 2016, requiring the U.S. Department of Health and Human Services to release updated rules to improve interoperability and prohibit data blocking.

HHS and the Office of the National Coordinator released the new rules in March. I believe the state OHIC can also encourage telehealth technology and interoperability in Rhode Island. [See link below to news release issued by the U.S. Department of Health and Human Services.]

[Editor’s Note: One of the problems with conducting interviews not in person is that the ability to ask follow-up questions is diminished. As much as the federal government has issued new rules to “improve interoperability,” the Senator’s response does not answer the question posed by ConvergenceRI regarding the different software texting platforms now in operation in Rhode Island that appear to lack interoperability, not withstanding federal rules. Perhaps if Sen. Whitehouse and his office team were regular readers of ConvergenceRI, the gap in understanding what was being asked would be illuminated.]

ConvergenceRI: In talking with behavioral health providers, I have heard that there is a 95 percent “participation” rate in telehealth sessions since the move to such platforms. What do you believe is the best way to organize the data around telehealth platforms?
WHITEHOUSE: I would defer to the providers and data experts on that question. I would hope, on a very simple level, that the repetitive filling out of your patient information can be automated to reduce that nuisance.

ConvergenceRI: Among a number of health disparities “exposed” during the COVID-19 pandemic in Rhode Island, when it comes to testing, was the assumption that requests for testing could be arranged through a primary care provider.
However, despite insurance “regulations,” many folks in Rhode Island did not have a primary care provider and/or could not access their primary care provider in a timely fashion, particularly members of the immigrant community, according to a number of physicians involved in testing. How do you think we should consider re-imagining what primary care is in a post-pandemic world, with telehealth engagement?
WHITEHOUSE: First, I want to acknowledge the Rhode Island Free Clinic, Clinica Esperanza, and all of the community health centers for their care during this pandemic to Rhode Island’s immigrant community and many others, regardless of whether patients have insurance. [See link below to ConvergenceRI story, “Connecting primary care to emergency care in a pandemic.”]

We know there are significant long-term health benefits to regular visits with a primary care provider. In practice, there are a lot of reasons why people may not have a doctor who they see regularly. Telehealth is one tool that can make it easier to build that primary care relationship.

Last, telehealth can help coordinate care for patients with multiple conditions, or whose care interacts with other “social determinants,” to keep patients healthier and thereby lower costs for all.

ConvergenceRI: What do you think can be learned by engaging with community recovery advocates involved with substance use recovery by asking them about what they have learned about “recovery,” in terms of understanding economic recovery in a post-pandemic world?
WHITEHOUSE: I won’t speak for addiction recovery advocates and professionals. I have heard that people in treatment find telehealth sessions convenient and comforting, and providers notice heightened participation and candor.

For myself, on economic recovery I’m working as hard as I can to get Rhode Island back to work and our economy humming.

Rhode Island small businesses received over $2 billion in federal support since the crisis began. More than $1.25 billion in CARES Act funding boosted the state’s response. We were able to get over $850 million in direct cash assistance to Rhode Islanders.

That $4 billion-plus has kept our economy alive during the pandemic, and I’m focused on continuing to fight for Rhode Islanders and small businesses as we consider the next virus response bill in the coming weeks.

To read the complete article: http://newsletter.convergenceri.com/stories/funding-improvisation-in-a-post-pandemic-world,5841