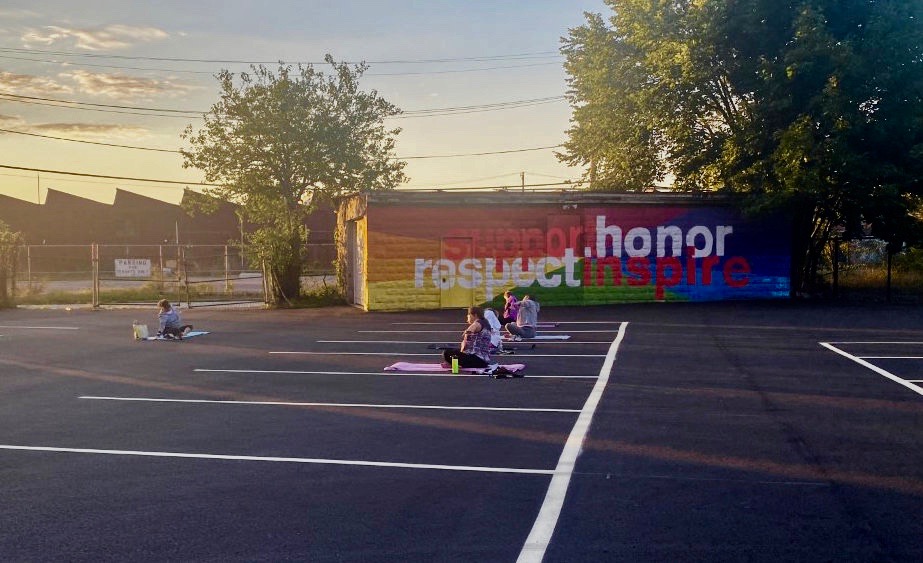 There are many ways that folks have attempted to maintain their equilibrium of the mind and body during these stressful times of the coronavirus pandemic.

Twitter abounds with selfies of bike riding to Newport, climbing Mount Monadnock in New Hampshire, boat adventures on Narragansett Bay, and displaying the bounties of gardening, with ripe tomatoes.

But one of the more motivational activities taking place on a regular basis has been the outdoors summer yoga classes hosted by Shri Yoga at its new facility at 390 Pine St. in Pawtucket, at sunrise on Sundays.

As ConvergenceRI reported earlier this spring, “The new watchword of Shri Yoga, which is dedicated to light and prosperity, may soon become “expect the unexpected,” striking a pose of flexibility and nimbleness, with the ability to pivot with the best of entrepreneurs in Rhode Island.” [See link below to ConvergenceRI story, “Finding a center of balance in a rapidly changing world.”]

As the story had detailed, Shri Yoga was forced to pivot in its plans, after years of planning to create a new facility: “On Thursday, Jan. 30, the nonprofit urban outreach yoga studio had closed on buying its new location at 390 Pine St., an historic, two-story, L-shaped brick building constructed between 1880 and 1882, culminating a two-year effort fund-raising effort to secure a new home.”

The building had been part of the former Conant Thread Co., once the largest textile mill complex in the Blackstone Valley that had served as Pawtucket’s largest employer for decades.

On Sunday, Feb. 23, Shri Yoga had hosted a tour of the building for its staff and teachers and supporters, displaying the architectural plans on the walls, a vision of positive change and transformation.

Then the world shifted dramatically, with the onset of the coronavirus, which forced Shri Yoga to suspend its in-person yoga classes on Friday, March 13, at its current Pawtucket location. As a result, the nonprofit made the decision to move its classes to virtual, online offerings, setting up live remote classes with its numerous community agency partners.

Awakenings at sunrise
Shri Yoga has been offering “Summer Sunrise Yoga” every other Sunday throughout the summer, from 6:30 to 7:45 a.m., with a request that those who want to participate pre-register, with one yoga mat per parking space permitted, in order to keep everyone safely socially distant.

The world of Pawtucket on Sunday, Sept. 6, at 6:30 a.m., the time of the last class scheduled for the outdoor summer program, is a contrast of shadows and architectural shapes, sharply drawn by the rising light from the sun.

In the parking lot, an instructor leads members of the classes in a series of exercises, as a recording of soothing music plays in the background, with a wall mural reinforcing the messaging: support, honor, respect, inspire.

The power of healing
In addition to its outreach efforts with “traditional” yoga instruction, Shri Yoga has continued in its efforts to work in developing “adaptive yoga,” working with adults who have intellectual and development disabilities.

When the new facility becomes fully functional, Shri Yoga hopes to be able to double its community programming, according to Alison Bologna, the founder, executive director and outreach instructor for the nonprofit group. [Bologna is also a TV news anchor at NBC 10 News, WJAR.]

Another innovative program that Shri Yoga has developed is working with pregnant women in a residential treatment program at the Eastman House. In a previous story from 2018, ConvergenceRI had described that work: “In the current tense midsummer world of disrupted lives, unsettled weather patterns, rampant wildfires, divisive politics and so much anxiety ruling the airwaves, 11 women gathered to find a small oasis of calm at Shri Urban Revitalization Yoga studio early Friday morning on July 27, to find balance in their lives as part of their recovery journey, breathing in and breathing out in unison.” [See link below to ConvergenceRI story, “A safe place where you will always belong.”

“We noticed that by getting the kids into an environment like ours, they respond,” Bologna continued. “We’re hoping to do more [programming] integrated with the six schools in Central Falls, because literally, they can bring a bus, which they can’t do now, drive over the line, park and come right into the studio.”

Afternoons, Bologna explained, will work really well with plans for a fully opened new facility. “Our expanded space means more opportunities to work with the kids in a more controlled setting. We do what we can with the after-school programs in the schools, but they are really short-staffed.”