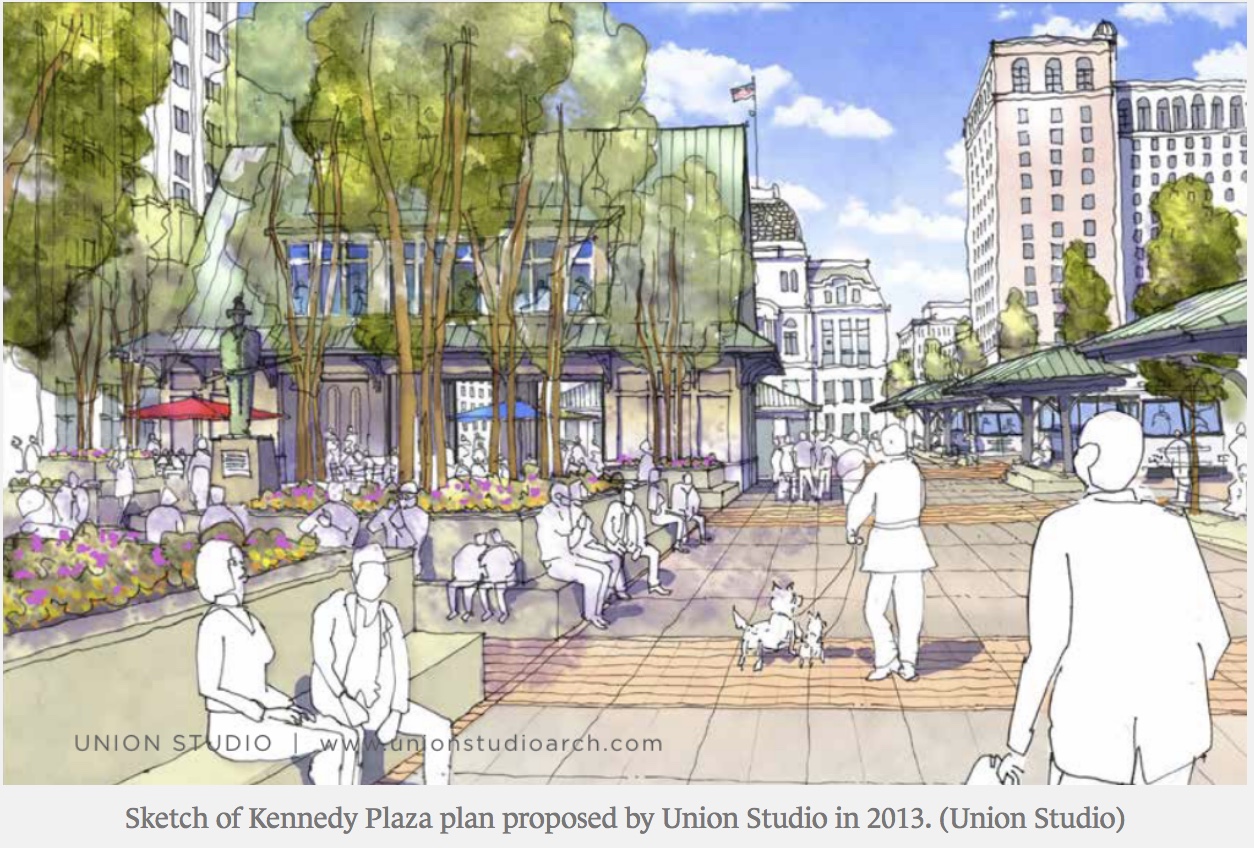 A sensible plan to renovate Kennedy Plaza attractively without evicting public transit from Providence’s central square – by far its most logical location – was submitted in 2013, designed by Union Studio. In 2015, this plan was frog-marched out of the picture by transit officials and replaced by a plan worthy of a Central European dictatorship. Sterile modernist bus kiosks were substituted for the existing Art Nouveau-style kiosks – whose number would have increased under the Union Studio plan.

Prospects for Kennedy Plaza have only deteriorated since then. The plan now features an unnecessary, inconvenient and costly removal of buses to new bus hubs distant from Kennedy Plaza and financed by a 2014 ballot initiative widely mischaracterized by planning officials. Last week, members of the Rhode Island Transit Riders met in Kennedy Plaza to protest the plan, which would add bus hubs at Providence Station and in the Innovation District. Official descriptions of the plan are curiously difficult to locate via RIPTA and RIDOT websites, and the public no longer plays a role in the authority to proceed with the plan, which is apparently now in Governor Raimondo’s hands alone.

A story on the website EcoRINews, published in July, described concerns raised by John Flaherty of Grow Smart Rhode Island about how the plan quietly morphed in recent years from improving Kennedy Plaza to removing it from its central role in public transit. He commented:

I don’t think that many people are happy with the status quo in Kennedy Plaza, as a public space, as a place that is safe and welcoming and inviting. It’s heavily dominated by transit. I think that there are ways that this can be addressed, but I think that there’s a balance that could be achieved. They don’t seem to be interested in that. They seem very focused on reducing or eliminating any kind of transit activity in Kennedy Plaza. I think that the administration is bowing to the pressure of a few over the benefit of the many.

Flaherty expressed dismay that the city has seemed to back away from the Union Studio plan and its own 2018 proposal that would have balanced the plaza’s roles as bus hub and civic square. He told EcoRINews:

I really can’t explain it. Back in September [2019] I reached out to the city to ask, “Why aren’t you backing your proposal? We’re out here advocating for your plan. Why aren’t you?” But we didn’t really get much of a response on that.

The role of villain appears to have settled on downtown property owner Joe Paolino, who as mayor in the 1980s rescued a down-at-the-heels Westminster Street by reopening the failed 1964 “pedestrian mall” to traffic and installing elegant streetlamps, brick sidewalks and street trees. Lined with shops and lofts in historic buildings redeveloped mostly by Buff Chace and Cornish Associates, it is now one of the loveliest city streets in the nation.

Fast forward two decades and Paolino seems to have developed an aversion to average people. He pushed successfully to ban smoking in the plaza. He has bought into a narrative that confuses bus riders with plaza idlers. They have been tagged, unfairly so far as I can tell, as petty criminals, drug dealers and ne’er-do-wells. Rid the plaza of their ilk and it would suddenly attract a more genteel public, including residents of a newly rehabbed Industrial Trust (“Superman”) Building, empty since 2013 but soon sure to attract public subsidies and private investment. Or so the theory goes.

Actually, combined with bus patrons and upscale idlers in the plaza after its renewal, a modest police presence would assure public safety by submerging petty crime in the general rise of the plaza’s civic and transit usage.

City and state officials should dump the new bus hubs, run a continual trolley loop between Amtrak Station and Kennedy Plaza, resuscitate the Union Studio proposal for the plaza (omitting its costly and unnecessary renovation of the skating rink), and revert to historic bus patterns here and nationwide by returning bus stops along arterial roads in and out of downtown, a transit practice foolishly discontinued in the 1970s.

The latest proposals to renovate Kennedy Plaza and whittle down its most vital role in downtown Providence reflect a drastic decline in design smarts exemplified by the River Relocation Project, led by the late Bill Warner, and the Downcity Plan, still led by Buff Chace. The design of the city’s Innovation District on land opened by moving Route 195, and the decision to replace the Route 6/10 connector with an identical concrete gash through impoverished Olneyville, rather than create a pleasing new boulevard, were breathtaking errors in city planning that will haunt Rhode Island’s capital for decades.

It’s not too late to stop Kennedy Plaza from joining those intentional blotches of God’s wrath on Providence urbanism.