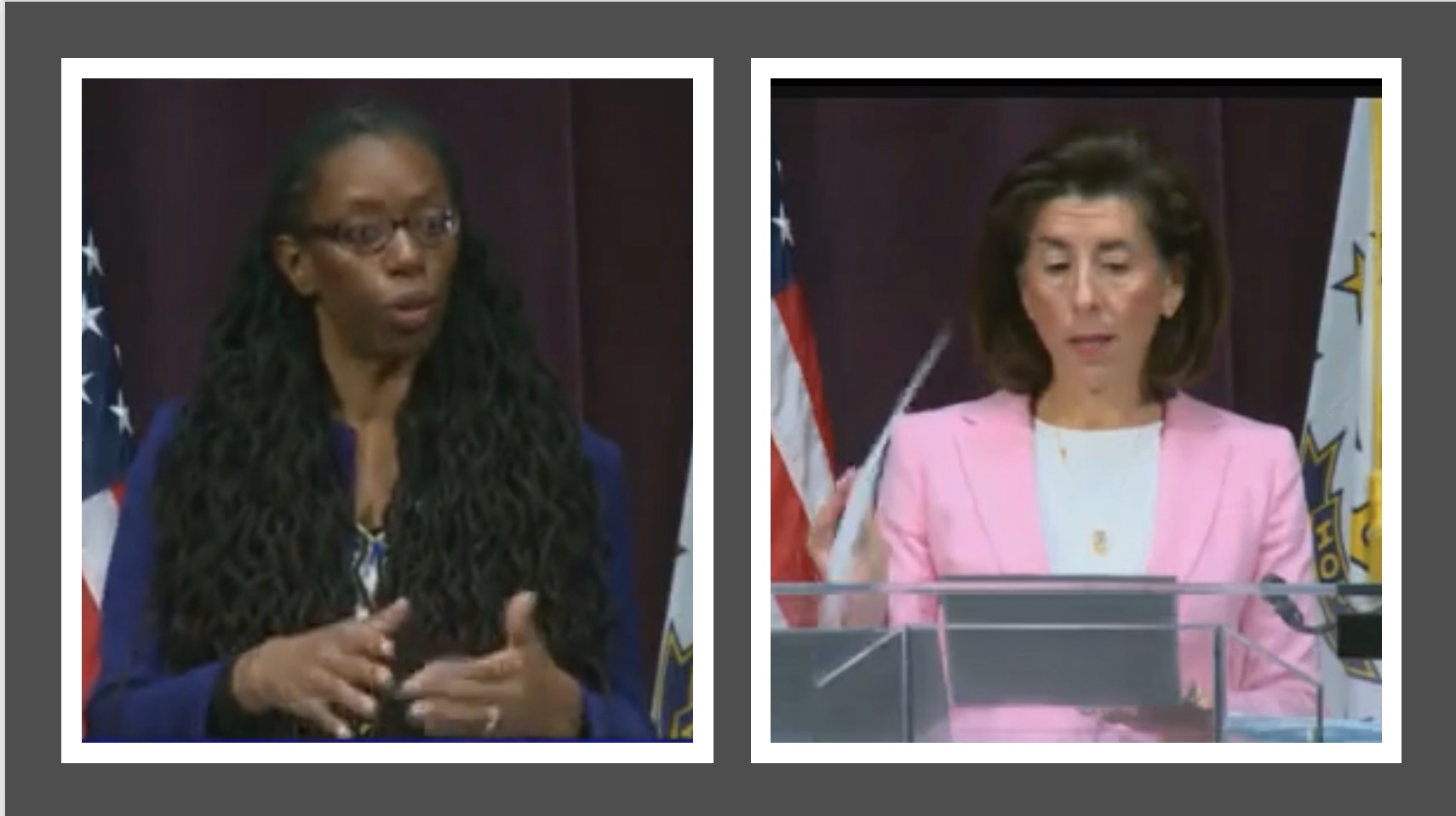 In a Saturday night flurry of tweets and text messages, Rhode Islanders learned that Dr. Nicole Alexander-Scott, Director of the Rhode Island Department of Health has tested positive for coronavirus. She is asymptomatic at this time.

RI’s Governor, Gina Raimondo, tested negative yesterday, and will be quarantining, as well as several members of her leadership staff, including her Communications Director, Josh Block.

The last public appearance for Dr. Scott and Gov. Raimondo, and the last time they say they were together was at the Thursday press briefer at the Veterans Auditorium.

Attending that event and on the stage with Scott and Raimondo was Dr. Philip Chan, who is a Consultant Medical Director with RIDOH’s Division of Preparedness, Response, Infectious Disease, and Emergency Medical Services, who has said he is quarantining. Also, Stefan Pryor, head of RI Commerce (who announced he, too, would be quarantining, but had a negative test result from yesterday’s test). Earlier in the week it was announced that the Director of Administration, Brett Smiley, had tested positive and was at home, with no contact with the State House in the week prior.

A group of Rhode Island’s media members also attended, and were seated in the audience, more than 6 feet away from the Governor (distanced by seating signs put in place prior to their arrival). Some members of the media who were at that briefing were talking on Facebook Live last night and more than one said they would schedule a test and quarantine until the time of those results coming back negative. In response to Bill Bartholomew, of the Bartholomew Podcast, the RIDOH said: “Everyone who should quarantine has already been contacted.”

Last week, the RIDOH edited their website to include this directive to people who had been exposed:

That policy would mean that those who were in close proximity to Dr. Scott would need to quarantine immediately and start their 10 days from their last exposure (next Sunday). If they get a test “taken at least 5 days after exposure – which would be Tuesday – and if that test is negative – the quarantine can be shortened to 7 days – or Thursday, and monitor themselves for the next 3 days for any symptoms.

The Governor’s office announced that their regularly scheduled press conference for Thursday would now be held one day later – Friday. Governor Cuomo in New York, has announced that his press events will now move to virtual, out of an abundance of caution.

A photo on social media was circulating but not having been picked up by the media. It showed the Governor dining indoors at Barnaby’s in Providence on Friday night, which was advertised as having a Wine & Paint night. When asked about this by Bartholomew, the Governor’s spokesperson, Block, noted that she was following the guidelines for indoor dining, and was seen wearing a mask when not eating or drinking, and was seated with her husband at the table. Some have noted that she seems to be much closer than 6 feet from the female seated in the photo and that without wearing a mask to eat/drink, social distancing is an even more important protection.

The Governor has been consistently vocal about her diligence in maintaining her Contact Tracing Notebook.

An historic week for Rhode Island

The first shipments of the Pfizer vaccine are expected as early as Monday in Rhode Island, with first vaccinations set to be given next week. Some high-contact front line medical workers have already been given appointments for shots as early as Thursday.

Running the State of Rhode Island

Many months ago the Governor was first asked, and has repeatedly been asked why she has not brought in her Lt. Governor, Dan McKee, as part of her team, so he could be ready to go if needed due to the Governor potential to be taken ill with coronavirus. The Governor has responded that she could manage the state’s affairs from her home, and that she was confident in her leadership team to carry out what needed to be done. Questions did not continue what would be “Plan B” if the “leadership team” were all to be sick at the same time.

Official Statement from Josh Block, Communications Director for the Governor: