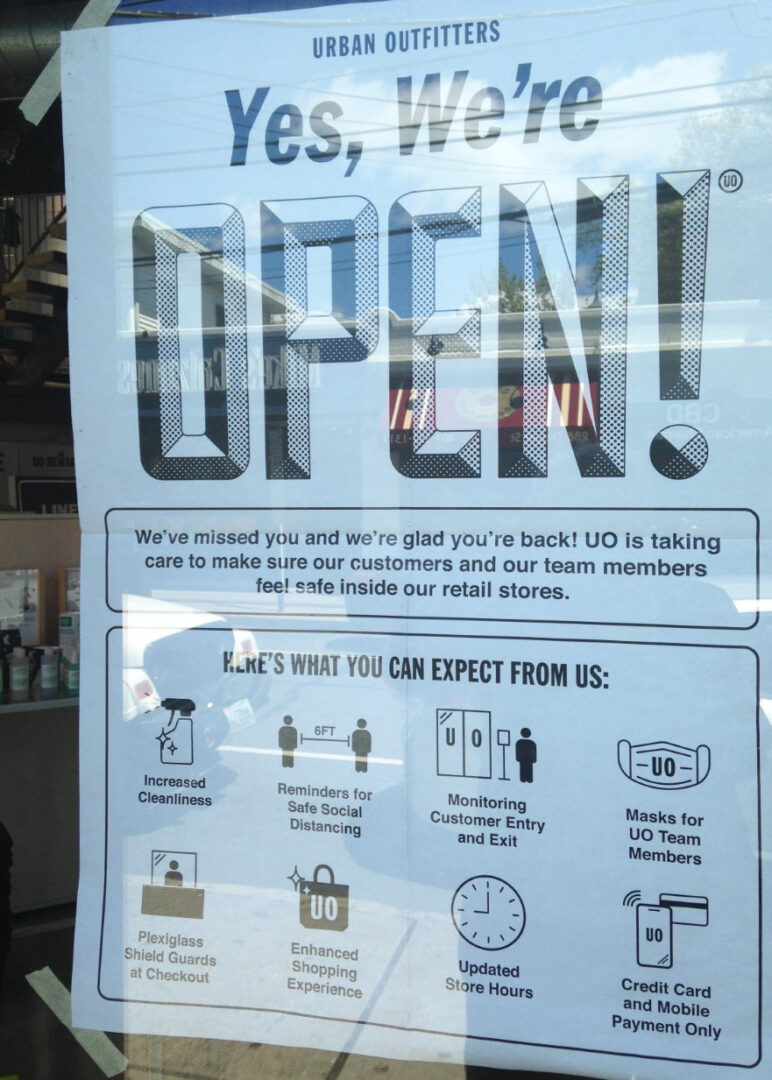 Rebuilding trust in a post-pandemic world

Photo: The sign in the window at Urban Outfitters on Thayer Street in Providence, announcing that the retail store is open for business again.

It will take novel policies to get us through a novel crisis from a novel coronavirus, not more of the same

I went to the dentist yesterday and was pleased to see how they were reopening. I was told in advance to call the receptionist from outside and she came out, took my temperature, and asked me a bunch of diagnostic questions before welcoming me inside.

Later I called my bank to ask a question and they offered to make an appointment for me to come in the afternoon, so they can meet people one at a time and clean in between.

And under those circumstances, masked, I was happy to go.

When she was 11, my daughter was diagnosed with a severe food allergy. It took us a little while after that to understand how to eat outside our own kitchen. The issue was not only which foods on a menu were safe but which places were safe.

For example, it was great to see things marked on a menu as safe for her. But what was even more important was simply knowing that the staff understood the problem.

I recall one restaurant where probably 90 percent of the menu should have been perfectly safe, but the breezy attitude of the waitress gave us zero confidence in her claim that it was “all good.”

It was pretty clear that neither she nor the kitchen took the problem seriously and what should have been a perfectly easy dinner out was ruined. I’ve never been back.

Another place, with only a small handful of options, became our favorite because of the care they took in listening to the problem and showing us the solution. We ate there about once a week for the next two years.

Cultivating trust is a process. That is, you can open a door, but what will make someone want to come in?

Obviously few businesses can test everyone at the front door. But no test has to be perfect, either. You can learn a lot from even a poor test if you have ways to corroborate it. My dentist can’t know if I’m infected from taking my temperature, but she can make a hunch based on that and answers to some questions. And that hunch can prevent her other patients from exposure, so long as she feels free to act on it.

In the same way, it would be great to know that our state government takes this problem as seriously as its citizens do. The Governor has been present, obviously, but the R.I. General Assembly has been MIA for months: no sessions have been held, no actions taken, no plans for the future shown, nothing.

As far as anyone knows, the General Assembly has been hiding out all spring and is only just now surfacing to slash the state budget and make sure that the economic pain is as deep and long lasting as possible.

To the extent we know anything at all about the Assembly and its plans, it is about the deficit and the slashing they anticipate, not about the accommodations for expanding the public health services necessary to get us out of this mess – and keep us out.

And I would love to hear more honest grappling with the economic consequences of the virus and the problems ahead for shaping the economy going forward.

As so many people are fond of pointing out, it is not feasible to continue the lockdown indefinitely, but it’s also going to be no fun if we wind up suffering both the lockdown and the medical disaster it was supposed to prevent.

Avoiding that second wave seems as important as avoiding the first. But we’re in it for the long haul, like it or not.

We’ve already learned from the last few months that there are huge public health vulnerabilities created by how we have organized our society. If we want to remain safe over the coming months, these must be addressed.

• First, we are not safer when people are forced to work when sick. Is it not obvious by now that paid sick leave is vital to controlling infection? Do you want to risk infection from a store’s cashier? [He doesn’t want to risk it from you, either.]

• Second, we are not safer when lots of people don’t have health coverage. Thousands of Rhode Islanders have lost their jobs and with them went their health insurance. Obamacare addresses this to some extent, but it’s not a solution for someone who is now broke. People without insurance become a burden on the emergency rooms and a risk to you if you have an emergency.

• Third, we are not safer when people isolated in quarantine or nursing themselves at home have no support. We cannot expect people to remain in their homes alone without medical and social care, but everyone else’s health depends on it.

• Fourth, we are not safer when lots of people don’t have a home to isolate in. People in homeless shelters are exposed to each other, and create a pool in which infection can thrive, grow, and spread.

The Assembly leadership can, of course, ignore all these issues. They have been ignoring most of them for many years, but this time, we can see at last that it’s all of our health on the line. The same line.

Beyond that, we need to hear plans about how we’re going to pull out of this mess. When asked about post-pandemic economics, the Governor has talked about the need to up-skill our workforce. But workforce skills have nothing to do with this downturn and they will have little to do with getting us out.

The state is not powerless here. It has capacity far beyond the whining about balanced budgets that you hear so often. If all that happens this spring is the state budget is slashed by $800 million, the hurt has only just begun.

This is a novel coronavirus and a novel crisis. It will take novel policies to get us through it, not more of the same.

Tom Sgouros is a frequent contributor to ConvergenceRI.

To read the complete story: