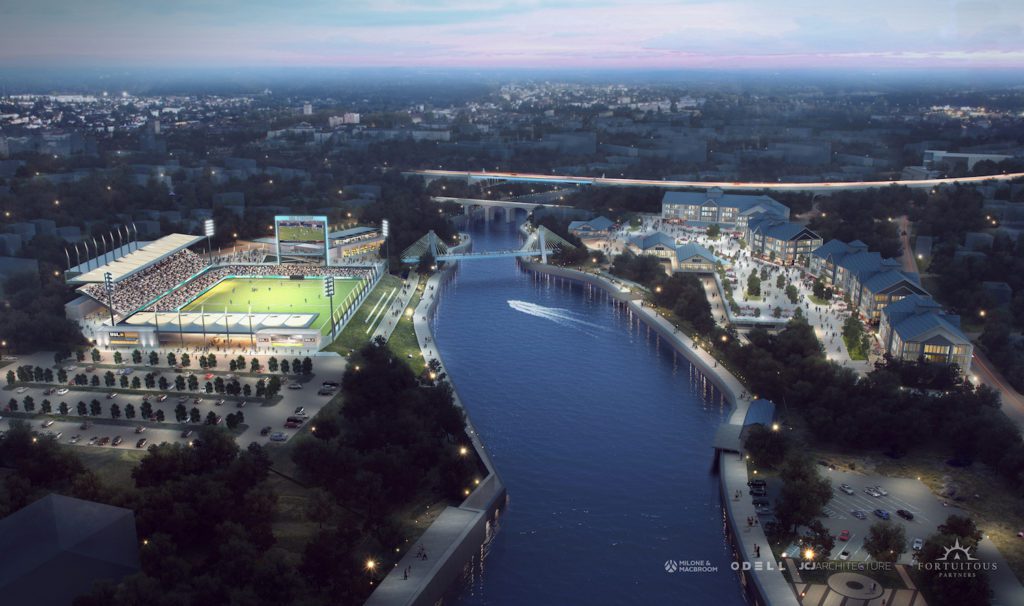 “If you understood how the sausage was made, you probably wouldn’t eat the sausage…” –  Pawtucket Mayor Don Grebien

The long-awaited announcement of the future of McCoy Stadium and life after the PawSox for Pawtucket happened yesterday. But neither McCoy nor baseball were on the agenda.

The event came exactly one week to the day of the Worcester Red Sox announcement of their WooSox nickname and “Smiley Ball” logo.

The past critiques of the PawSox Providence/Pawtucket deal included not having all the parties together in one room. Not so yesterday as the fairly large gathering of stake holders, politicos, members of city councils, parties, committees, unions and outside partners were often introduced with nods and accolades for the hard work that got the new plan to this point.

Several presenters had tan and black team scarves with the words “Rhode Island” and “USL” (United Soccer League) over their shoulders. Among speakers including Mayor Grebien, Governor Raimondo, Stefan Pryor, and others, was the principal of USL, Phoenix Rising, Brett Johnson, a Brown University graduate, who spoke about bringing soccer to Rhode Island, and showed a video of the greater project.

The Rhode Island market is in the top 10 television audiences for professional soccer watching on television, it was noted. “Soccer is the future”. A team name, “Riptide” was put out only as a placeholder for the time being. The project with all developments included will be called The Tidewater Landing.

The words “public private partnership” were mentioned early on, and there seemed to be an audible holding of one’s breath in the room. Those words were integral in turning the public tide against, and eventually killing the PawSox plans for Providence and Pawtucket.

They quickly moved on, announcing the $400 million project to bring activity to the waterfront. Public money, approximately $70-90 million, was announced by Speaker Mattiello, to be used only to finance infrastructure and downtown improvement. Private funds will be used to build the stadium and buildings. Details on each feature, financially, were not provided at this time.

Funding will seek to utilize federal Opportunity Zones tax advantage, which are federal income tax incentives designed to spur economic development by allowing taxpayers to defer capital gains by reinvesting those gains into communities that have been specially designated as “qualified opportunity zones.”

From the Institution on Taxation and Economic Policy, “While proponents touted the program (Opportunity Zones) as a way to grow economies of struggling areas, there is reason to be more than a little skeptical that this growth will trickle down to low-income families. Instead, this program runs a high risk of displacing low-income people living in communities from which government has historically and systemically disinvested”. A quick google of the program will uncover a rumbling about this program as a way to help poor communities, but it is really only a tax break for the rich. There is even an action being taken by the controversial Rep. Rashida Tlaib to introduce legislation to repeal the controversial “Opportunity Zones” saying it is a “scam” upon Americans.

Yet many economists tout Opportunity Zones for bringing in development where no other efforts have worked, and where, otherwise, no well-established developers would consider mega-projects in communities.

The project will open up a capacity for 4,000 jobs; developing 280,000 sq. ft. of retail/office space; 215 residential units; a 200-room hotel, and an indoor sports and event center, accommodating multiple sports, youth sports, indoor and outdoor venues and concerts was mentioned.

The project includes a pedestrian bridge to span the Seekonk River and riverwalks on both sides of the river.

The quote of the day from Mayor Grebien: “If you knew how the sausage was made, you wouldn’t want to make the sausage…” came just before he introduced CommerceRI Director Stefan Pryor.

1.  What is to become of McCoy Stadium?  Some options were mentioned – baseball was one, municipal purposes, another. But there was no inclusion of “McCoy Stadium” at the press conference itself.

2.  The Apex property is not resolved? The Apex sale or possession by eminent domain is still unresolved. They are hopeful of a sale, but the unpopular action of using legal means to take the property hovers over the project as a tool to make it happen.

3.  How will the public react?  Will the 38 Studios cloud that hung over and eventually was attributed to killing the PawSox deal, now be combined with the bad taste in everyone’s mouth about losing the PawSox and hang over this deal, too?

4. How much team spirit can be roused in the state and region for soccer? Remembering that much of the glory of the PawSox came because they were the Rhode Island part of the Boston Red Sox, complete with famous players often playing at little McCoy.

The press conference ended its official moments and adjourned into another room for questions, but not without taking a “team photo” – that is, all the members of political groups, private groups, elected officials, etc. who were present.

To learn more details, go to the website for The Tidewater Landing, here:

And here is the new USL updated site:

Not sure if this is a new team logo, but it has appeared on the USL Twitter feed with a trademark symbol.