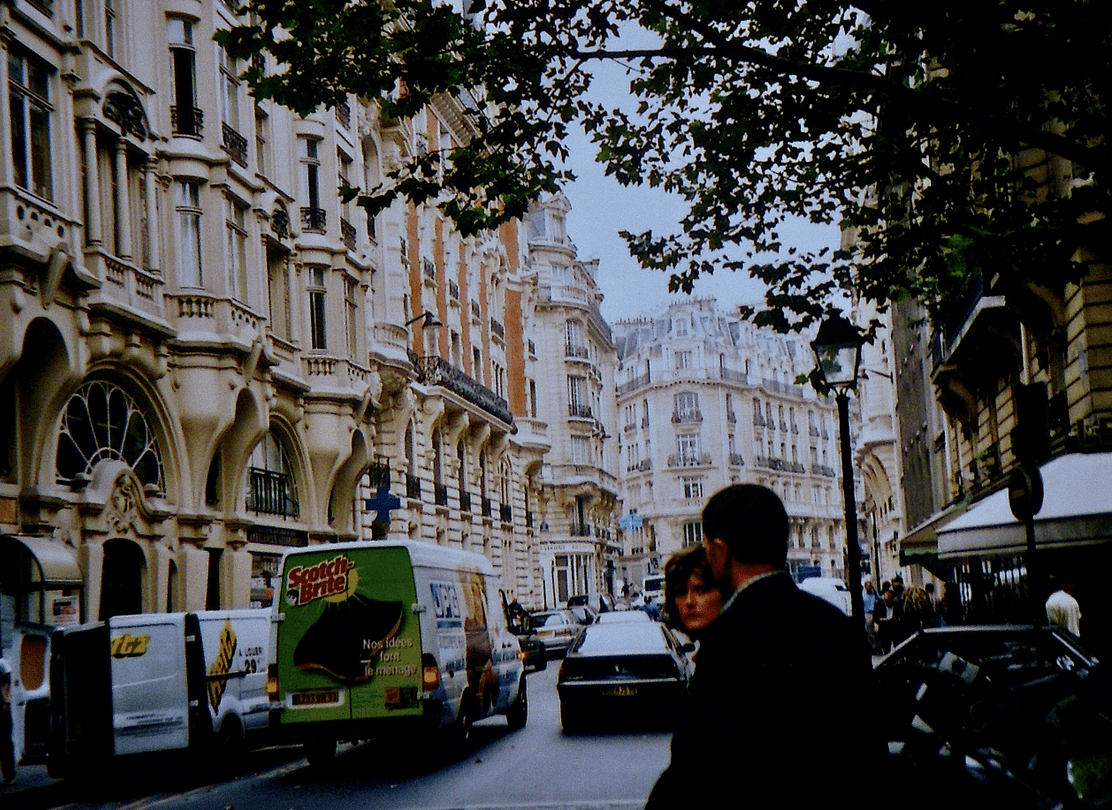 Photo, top: My favorite shot of central Paris taken during a trip there in 2003

There is an infinity of reasons why Paris should not build skyscrapers. Each street, each building, amounts to such a reason. You could say each citizen of Paris, each citizen of the world is a reason. But one reason I found on a history website today as I sat down to write this review, but which did not show up in the book, is that Paris sits on top of a huge maze of unmapped tunnels that could collapse at any time (and regularly do collapse). That sounds like a pretty good reason. Buildings in Paris have a weight limit in order to forestall such collapses. Height limits? That is another matter.

A book in the making for close to a decade and a half has just been published by the International Coalition for the Preservation of Paris (ICPP) and SOS Paris. The late Mary Campbell Gallagher was associated with both groups and served as editor of Paris Without Skyscrapers. Subtitled “The Battle to Save the Beauty of the City of Light,” the volume contains 54 essays, written over the past 15 years, touching just about every base in the discourse over highrises in Paris. The book is graced by famous and charming cartoons about city planning by the architect and urban theorist Léon Krier.

Andrés Duany, the founder of the New Urbanist movement, said: “This book is important because Paris is important.” The late philosopher Roger Scruton said: “To destroy the example of Paris as a city of civilized streets, built in humane local stone, for the sake of the antiquated and discredited doctrines of the architectural modernists would be a crime against the civilization of France and against the European idea of the city.”

Most of the essays in the book evoke the same sentiment, whether for aesthetic, historic, environmental or economic reasons. Some are beautiful, others are insightful, many are both, others neither. Together, they assemble the full range of reasons (almost) why Paris should build no skyscrapers. One of the several proposed in 2008 has been built. It steals France’s judiciary from the Îsle de la Cité, the seat of French justice for a thousand years. It is a set of glass boxes that slithered from the office of French architect Jean Nouvel. He ignored the fact that the only skyscraper in Paris until 2018, the Tour Montparnasse, has been the most hated building in the city since it went up in the 1970s. Why would anyone expect Nouvel to care?

What the harridan Hidalgo, mayor of Paris, has in store for her city and its citizens would be the crime of the century. She has proposed 7-12 towers, but if those are built, more will be. And it is not only skyscrapers. She is removing the city’s historic benches and newspaper kiosks, not to put them in storage until the insanity passes, but to junk them. Most Parisians oppose her, but unless they and citizens of the world can stop it – and, in addition, halt modern architecture that doesn’t qualify as skyscrapers – we won’t have Paris anymore.

Almost all of the essays in Paris Without Skyscrapers are very short. I wrote the book’s final essay, reprinted below.

Paris is the world’s most beautiful city. It has rivals, but only Paris is famous for being the world’s most beautiful city. Neither the fame nor the beauty of Paris arises from its wealth. What wealth it has arises from its beauty, and its reputation for beauty. And yet the beauty of Paris, like all beauty, is fragile. Not only can it vanish, but it can vanish before anyone notices.

Victor Hugo said, “To err is human, to loaf is Parisian.” G.K. Chesterton said, “London is a riddle. Paris is an explanation.” Cole Porter said, “I love Paris when it sizzles.” In Casablanca, Rick said to Ilsa, “We’ll always have Paris.”

None of these great lines about Paris refers to its beauty, but without it they would all have gone unsaid. To be the most beautiful city is to be in the deepest sense the greatest city. So it is sad that what Mr. Rick said may at last be on the verge of falsehood. We may not always have Paris.

Paris should look at another great city that once rivaled Paris in beauty. London has sold its beauty for a mess of towers. Paris now aspires to be London, and it imagines that skyscrapers can bring it London’s status. That is as iffy as the euro, and London’s financial influence long predated its towers. Yet if this future for Paris is possible, it will be so only at the cost of its beauty.

If all of the towers planned today do rise, Paris will still be beautiful, but its beauty may have suffered a silent blow more deadly than the sight of the first five or six new skyscrapers in the encroaching distance. Paris may have been given a final shove toward a point beyond which the decline and fall of its beauty will be impossible to stop.

Paris already creeps toward that tipping point, very slowly it is true. Yet are its citizens, let alone its leaders, worried? Hardly. All is not lost at this moment, but who will know when it is? At what moment will Paris have lost enough beauty that its reputation for beauty is in doubt? How many towers will that take? Who will make that judgment? Will they be heard over the noise of those who do not care?

At some point, the erosion of the beauty of Paris could gather a momentum that cannot be stopped even if the danger becomes widely recognized. Then all will be lost.

Stop the skyscrapers, or we will not always have Paris.