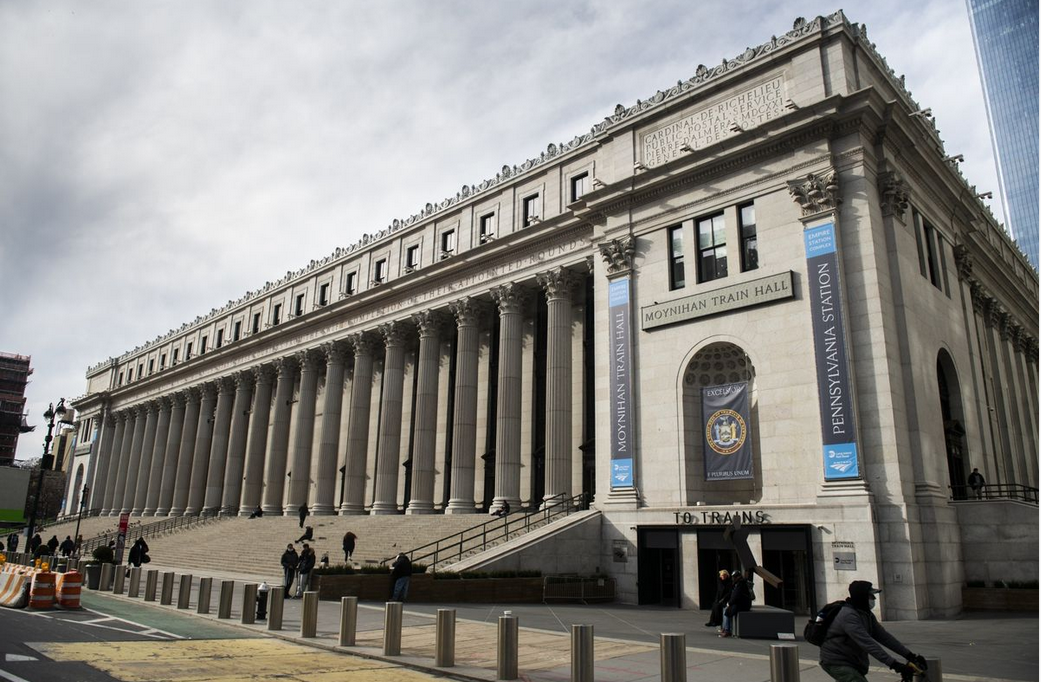 On the Moynihan Train Hall – by David Brussat

Photo: Moynihan Train Hall is inside the 1912 James A. Farley Post Office Building.

News of the Daniel Patrick Moynihan Train Hall opening across 8th Avenue from Penn Station in Manhattan is rivaled only by news about the closure of The Vessel, the ridiculous tower of art at nearby Hudson Yards, because of its allure to suicide wannabes. Speaking of suicidal feelings, Penn Station doubtless generates its share. I can never resist historian Vincent Scully’s quote after the original Penn Station’s tragic demolition in 1963. He wrote: “One entered the city like a god; … one scuttles in now like a rat.”

The passageway from Penn Station to the new train hall is akin to a rat scuttle (if there is such a thing). Still, entering from the street through the colonnade of the James A. Farley Post Office Building, designed by McKim Mead & White, and completed in 1912 – three years after Charles Follen McKim’s death and two years after the opening his equally classical Penn Station – is as god-like an experience as one could wish.

Once inside the hall, the vast former postal-sorting room sits beneath a vaulted glass roof supported by original mammoth iron trusses decried as “beefy” and “intrusive” by architecture James S. Russell in “Can the Moynihan Train Hall Redeem Penn Station?” for Bloomberg CityLab. Russell doesn’t really answer the question. Nevertheless, the answer is no.

Ian Volner’s “The Moynihan Train Hall’s Glorious Arrival” in the New Yorker begs, somewhat, to disagree. It may combine “early-twentieth-century grandeur with early-twenty-first-century sophistication.” But the hall is also “ineluctably airporty.” Yet, thinking more broadly, Volner finds it distasteful that Facebook has leased the office spaces above the undulating glazed roof of the courtyard:

At all hours of the night and day, passengers gliding into the airy elegance of the concourse might be looked down upon by the employees of Mark Zuckerberg, whose windows sit directly above the skylight, surrounding it. As a metaphor for America’s society of digital surveillance, it’s pretty on the nose.”

Indeed! Still, as an aesthetic experience the train hall beats the rabbit— oops, the rat warren of Penn Station. That is a very low bar. To call the Moynihan Train Hall a step in the right direction is to damn it by faint praise, which is precisely my intention. The fact that it is now open does not in the least do away with the need for the proposal, by architect Richard Cameron and the National Civic Art Society, to rebuild Penn Station using the original design of Charles Follen McKim. Volner almost seems to allude to that when he writes:

The realization of the Moynihan Train Hall’s potential — and with it the redemption of New York’s greatest architectural mistake — can’t be truly complete until the late-sixties complex meets the same wrecking ball that clobbered its predecessor.

He stops short of citing the Cameron/NCAS proposal. He quotes Moynihan in a way that seems to pick up and even recast Volner’s thought of “clobbering” today’s Penn Station: “Where else but in New York could you tear down a beautiful Beaux Arts building and find another one right across the street?”

Moynihan is often referred to as the man who, as an aide to President Kennedy, wrote the apparently unintentional mandate for modern architecture for federal buildings. That was 1962. Eight years later, Moynihan said, “Twentieth-century America has seen a steady, persistent decline in the visual and emotional power of its public buildings, and this has been accompanied by a not less persistent decline in the authority of the public order.”

That is another quote that I cannot resist, and with the one offered by Volner, it suggests (to me) that Moynihan came to regret the boost he’d given to modern architecture. So, yes, I think Moynihan Train Hall is a perfectly appropriate for a U.S. senator who made it his mission to promote public rail. I am sure that while neither of the two articles quoted above mentions the best current proposal by far for Penn Station, the proposal to rebuild it in the image of McKim’s design is one that Moynihan, who died almost two decades before the opening of his train hall, would lovingly support.

And it may just be that a fellow train buff famous for taking Amtrak between Delaware and Washington, D.C., will also find it to his liking.