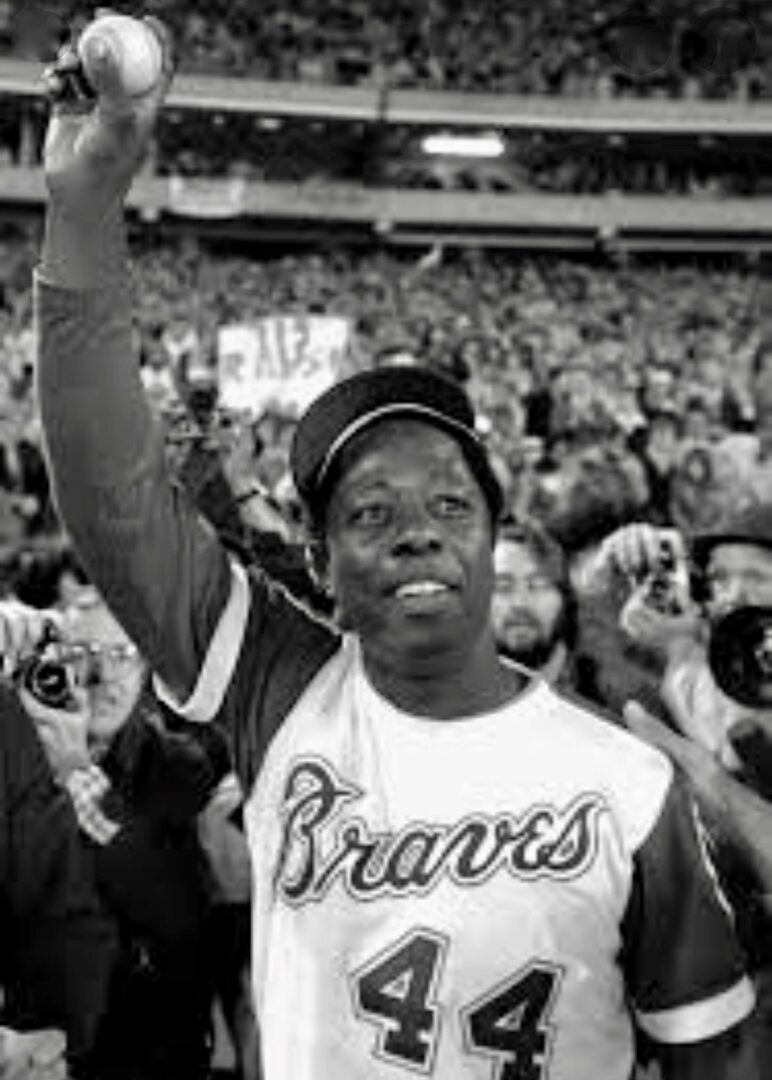 The news of Henry Aaron’s death on Thursday, January 21, 2021 came across the news feed almost like a footnote, it broke in many ways just like the man himself was – quiet, unassuming and low key. As the news began to circulate, the news grew bigger and bigger and it began to hit home. One of the biggest baseball legends in the history of the game had died, and it was time for this humble man who played a child’s game to finally receive the honor that a true superstar deserved.

It is funny how the word “superstar” is thrown around nowadays for those who are average professional athletes. In baseball Ruth, Williams, Mays, Robinson and Cobb were the best of the best but never known as superstars. The term began in the 1970’s when Sports Illustrated put Reggie Jackson on their cover with the title of “Super Duper Star!” As talented as Jackson was it was those who came before him playing a game for little money and small perks that came with adoring fans, but they played for something bigger than they were; they played with a drive and passion to be the best that many of us will ever know.

As for Hank Aaron who was born on February 5, 1934, in as far south as you can get, Mobile, Alabama, at the height of the Jim Crow south where Blacks were looked down upon. Segregation was very much alive in the deep south of America when Aaron was born. Separate schools, separate stores, separate job opportunities, separate, separate, separate everything. The great depression had a hold on the country, World War II was about to explode, and opportunities were hard to come by for everyone. As Aaron grew up he was all too reminded where he was and how he had to conduct himself daily. But for Henry and his brother, Tommie, they discovered the sport of baseball, listening to games on the family radio or they were to be found sneaking into the local baseball field and watching teams play the game. Then they would go back home to make balls out of string and rags, using tree branches as bats and finding a field to convert to their own baseball diamond.

Nobody knew at the time when they played their pickup games, they were playing alongside with someone who would one day become bigger than the players that they grew to look up to and admired. But during those days Black players did not play in the major leagues, they played in the Negro leagues because they were not allowed to play with white players. For the time being both Hank and Tommie played on fields that barely resembled a baseball diamond. They became Boy Scouts; it was with the Boy Scouts where the opportunity presented itself within their organized baseball league. Word of the Aaron brothers reached the ear of a local scout for a Black only semi-pro team, it was also during this time where another Black ball player named Jackie Robinson was signed by the Brooklyn Dodgers breaking the Major League baseball’s color barrier in 1949. Becoming a hero and inspiration to the young Aaron.

In 1954 Henry Aaron made his major league debut after being drafted by the Milwaukee Braves. Aaron spent 23 years in the Major leagues playing for Milwaukee then went with the team when they moved to Atlanta and finished his career back at Milwaukee. But this time it was with the Brewers where he retired in 1976. All he did was hit 755 total career home runs, passing Babe Ruth as the leader of all time. His ability to hit home runs out of any major league baseball park earned him the nick name of “Hammering Hank”.

Over his career Aaron hit 24 or more home runs in a single season from 1955 to 1973 and hit 30 or more home runs 15 times. Aaron played in at a time when many players hit balls that were considered “dead”, bats that were heavy as tree branches. There were no batting helmets, and pitchers would throw at batters frequently. Another thing that set Aaron apart other than the fact that he was not this massive mountain of a man, was the fact that he never wore batting gloves. He was an Outfielder that played every outfield position and in his final two seasons back in the American League’s Milwaukee Brewers, Aaron finished his career as the designated hitter before retiring in 1976.

The Hammer appeared in 20 All Star games, 20 for the National league and 1 for the American League, but he holds the record for most All-Star game appearances with 25 but playing in only 24 (Aaron played at a time when the All-Star game was held twice a season). He was on one World Series Championship team with the Milwaukee Braves, he won the National League Most Valuable Player and won the Gold Glove as his positions best defensive player three times. In his career Aaron holds the all-time record for runs batted in (2,297), extra base hits (1,477), and total bases (6,856). Aaron finished his career in the top 5 players for career hits (3,771) and runs scored (2,174). He was one of only four players ever to hit 150 hits or more for 17 seasons. He was elected to the Major League Baseball Hall of Fame in 1982.

The thing I remembered most was the evening Hank Arron overtook Babe Ruth to claim the home run title. I was rooting for him like everyone in Atlanta’s stadium that night. The game was against the now Los Angeles Dodgers on National television. I remember the pitch and that perfectly smooth swing and the ball left the confines of the ballpark and history was made. The stadium erupted with cheers that only a few years earlier would not have happened in this part of the country – for a Black man that just passed what many considered the greatest baseball player who ever lived. What I recalled the most was after the ball left the bat and cleared the fence, Henry Aaron put his head down and briskly jogged around the bases as if this was just another home run. People jumped out of the stands and onto the field, security which was on high alert given the fact that Aaron received many death threats leading up to this moment which had to add to this enormous pressure. After an uncomfortable curtain call the game resumed but every homerun after that night that Aaron hit, it was a record breaker.

Henry Aaron went on to become the Senior Vice President with the Braves and was awarded the Presidential Medal of Freedom by then President George H. Bush. Henry Aaron became a philanthropist and an ambassador of the game that he loved. He was not out to make history, but history found this quiet, low-keyed man and made him a legend. Since that magical night when the whole world stopped to watch history happen, other players made noise when it came to home runs, Mark McGwire and Jose Canseco in another season chased each other to the all-time seasonal home run record, only to be tainted with the accusations of use performance enhancing drugs as was Barry Bonds who also used PED’s as he shattered Aaron’s record with the added cloud that juiced balls and altered bats were used when they all hit the bulk of the home runs. But for Aaron, there was never any mention of this or of other rumors. The class act that was Henry Aaron, he offered only congratulations to Barry Bonds.

So last week the Nation lost a sports legend, a true hero in every sense of the word. Where for one moment he brought the entire world together and made us forget what sets us apart even if it were only for a moment. Rest in Peace, Henry Louis “Hank” Aaron.