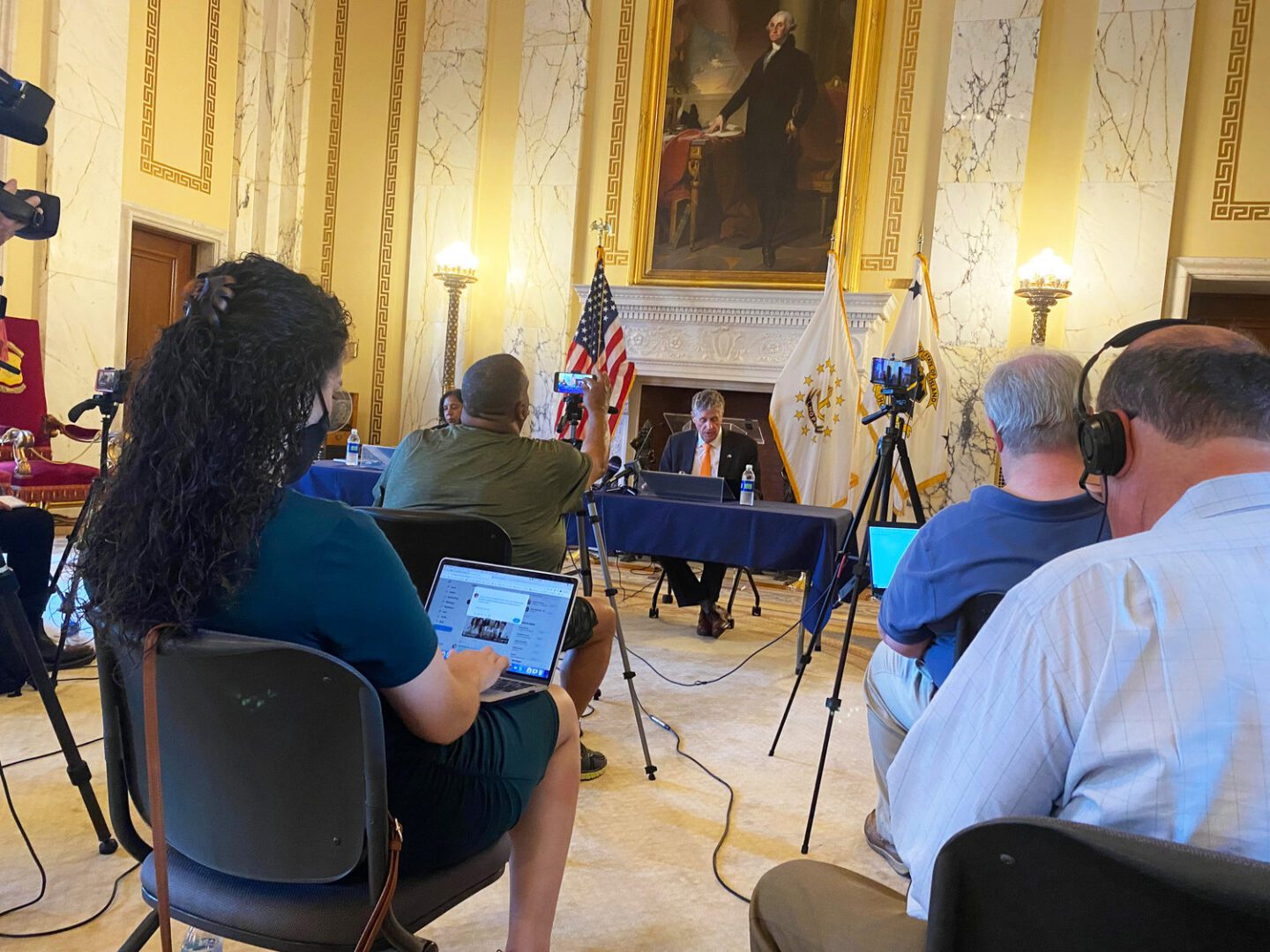 Under the presence of the portrait of George Washington, Gov. Dan McKee accused officials from the Raimondo administration of giving him “a fairy tale” when it came to the proposed budget for Eleanor Slater Hospital at the June 8 news conference held at the State House.

One distinct advantage of publishing weekly and not every day is the ability to take the time to reflect upon, and then write about, what ConvergenceRI had witnessed when attending two news conferences, back to back, held on the same day, at the State House, on Tuesday afternoon, June 8.

The challenge, of course, is to put what had occurred into perspective, to give it broader meaning and context beyond the immediacy of the moment, when the news is captured, recorded, and spit out – and then promptly forgotten and discarded in the rush toward the next new, bright and shiny event.

The public has a limited attention span these days and is easily distracted by the promise of summertime and easy living. Writing in bite-size, compelling prose is no guarantee that people will read the story, no matter how important the content.

Here are some takeaways:

• The first, a news conference held in the State Room at the State House, marked a significant transition back toward “normalcy” in the post-pandemic world, after a too-long political season marked by tragedy, trauma and loss, even if the recovery continues to be slow and awkward. Some 20 reporters, mostly unmasked, with a phalanx of cameras, asked hard but respectful questions of the Governor and Lt. Governor. Call it a talk therapy session conducted in public.

Healing, however, will take time. The long-term scars of the pandemic will persist, despite the strong desire to move on and to forget.

It was with remarkable candor, then, that Gov. Dan McKee accused former Raimondo administration officials of telling him “a fairy tale” when it came to budget assumptions around the future of Eleanor Slater Hospital, a calculated miscalculation that will now cost taxpayers at least $40 million in added budget expenses.

• The second, a gathering on the steps of the State House, featured all top five of Rhode Island’s elected officials – the Governor, the Lt. Governor, the Secretary of State, the Treasurer, and the Attorney General, all publicly voicing their support for common-sense gun laws that are now pending in the R.I. General Assembly. The proposed legislation has been stalled by refusal of the R.I. Senate President and the R.I. House Speaker to hold up-or-down votes on the legislation.

With surprising gumption, Rhode Island’s top elected officials presented a unified front, even if three of them – Gov. McKee, Treasurer Seth Magaziner, and Secretary of State Nellie Gorbea – are likely to be opponents running against each other as candidates in next year’s gubernatorial Democratic primary election.

The audience that most needed to hear the messaging, perhaps, may have been the members of the R.I. Capitol Police, who are responsible for the screening protocols for visitors at the State House. One officer had stopped radio talk show host John DePetro on his way to the first news conference to ask him about the proposed gun legislation.

After DePetro had hurried up the marble stairs, ConvergenceRI spoke with the officer, asking him whether he agreed that the proposed laws that would ban high-capacity magazines and make it harder for straw purchases of guns made sense to him. The officer agreed that both were ideas he could support.

And, at the second news conference, ConvergenceRI observed the officer paying careful attention to what was being said, seeming to nod his head in agreement.

• What the two news conferences revealed, taken together, were the limits of governing – as well as the persistent hope that telling the truth in public can help to preserve the integrity of our fragile democracy.

The Governor can call for the public restrooms at Kennedy Plaza to be reopened [as he did in a news conference held on April 20]. But what happens when the director of the R.I. Department of Transportation still refuses to follow McKee’s advice, two months later?

The Governor can call for greater accountability in the use of private consulting firms [as he did in a news conference on April 20]. But what happens when one of the seven consulting firms responding to the RFP to write the Rhode Island 2030 plan is McKinsey & Co., which settled a lawsuit earlier this year for $2.5 million damages for “turbo-charging” the opioid epidemic in Rhode Island? Should that disqualify McKinsey from doing future work for the state? [See link below to ConvergenceRI story, “The high cost of consulting firms making policy.”]

And, the Governor can call for greater transparency around state Medicaid spending in Rhode Island, particularly in regard to care of patients at Eleanor Slater Hospital. But what happens when the agency officials responsible are shown to have been less than forthcoming in how decisions were made?

Setting the stage
R. I. Gov. Dan McKee and his political partner, Lt. Gov. Sabina Matos, marked 100 days in office this past week with a flurry of activities – including bill signings, book store visits, and high school graduations. The news media responded as if they were dutiful children: attending, asking questions, capturing the occurrences, filing their stories, then moving on to the next staged event.

For sure, the news treadmill is unrelenting. We live in a time when the urgent news cycle no longer seems bound by gravitational forces; we are always hurtling from catastrophe to scandal to catastrophe. We travel the spaceways, as Sun Ra once so eloquently put it, from Twitter post to Twitter post.

The beauty of Mike Cohea’s photographs of the solar eclipse or the golden sunlight shimmering in the skies above the Providence skyline cannot stall the cloudy days ahead.

Nor can we hold still the stars – unless, of course, you are a true believer of Rep. Louie Gohmert, a Republican Congressman form Texas, who asked last week a National Forest Service official whether federal agencies could alter the orbit of the Earth and Moon to address climate change.

On the good news side
On the good news side of the equation, the news conferences held every two weeks, featuring Gov. McKee and Lt. Gov. Matos, have been a positive intervention by the McKee administration, begun on April 20, as a way of having dialogue with news reporters on topics beyond COVID-19. [See link to ConvergenceRI story, “Charting the rapid learning curve of Gov. Dan McKee.”]

The June 8 news conference took place under the imposing portrait of George Washington painted by Gilbert Stuart; Washington was alleged to have said that he could not tell a lie about chopping down a cherry tree. As if spurred on by Washington’s legacy, Gov. McKee said out loud, in public, that officials in the former administration of Gov. Gina Raimondo had not told him the truth. Translated, they lied.

“The previous administration provided information relative to the Eleanor Slater Hospital which was not accurate,” Gov. McKee said. “There were assumptions that were not real. It was a fairy tale.” As a result, Gov. McKee continued, those “inaccurate assumptions” around revenue “shortchanged” the budget by a significant amount of dollars – some $40 million. The questions remain: Will Gov. McKee call out the liars? Will they lose their jobs or be forced to resign?

The scandal surrounding the apparent mismanagement at Eleanor Slater Hospital, which operates under the jurisdiction of the R.I. Department of Behavioral Healthcare, Developmental Disabilities, and Hospitals, continues to deepen, which now includes investigations by the R.I. State Police and the R.I. Attorney General.

Elements of style
Unlike his predecessor, McKee arrived on time, and began with little fanfare. In contrast, former Gov. Gina Raimondo, was almost always at least 15 minutes late, behaving like a diva.

In the best tradition of perhaps a folksy Jimmy Stewart film character, McKee never over emotes. Instead, he tends to ramble, almost mumbling as he ran through a series of announcements: the naming of the replacement, Terence Gray, for the departing Janet Coit, long-time director of the R.I. Department of Environmental Management; praising the newly selected interim Providence School Superintendent Javier Montanez, a product of the Providence public schools; and the sharing of the latest statistics related to unemployment. Then Lt. Gov. Matos went through a similar list of activities in perfunctory fashion.

The high price of consultants

Far below the radar screen in the news last week was the announcement by Commerce RI that seven consulting firms had put in bids to be hired to write Gov. McKee’s “Rhode Island 2030” strategic plan, as reported by WPRI’s Ted Nesi.

The inclusion of McKinsey & Company on the list of potential bidders surprised ConvergenceRI, given the fact that the consulting firm had been found liable for “turbo-charging the opioid epidemic in Rhode Island and paid a penalty of $2.5 million as a result. [See link below to ConvergenceRI story, “The high cost of consulting firms making policy.”]

The planned reliance on consulting firms to write the strategic plan for the state’s vision of Rhode Island 2030 was also surprising, given Gov. McKee’s previous concerns expressed about such consulting firms feeding at the public trough. See link below to ConvergenceRI story, “Charting the rapid learning curve of Gov. Dan McKee.”]

As ConvergenceRI reported: McKee [said he] has launched a broad oversight initiative to look at all the state contracts with private consulting firms doing business with Rhode Island.

“I think consulting is important, and I think there are certain benefits there, but you’ve got to evaluate it,” McKee said. “It has been somewhat difficult to get the information, and I have asked several [agencies] for information about every consulting agreement that is currently in place. [I want to] take a look at each agreement to see what was actually invested. That’s ongoing; we’re going to get that [information]; I’m pretty persistent on that. We’re going to get that information and then we’ll make it public, about what’s going on, about who we are paying, and what they’re getting.”

As a caveat, McKee offered the fact that he had just put out an RFP on consultation in education, but that he was adamant. “I want to make sure that we’re getting our money’s worth. We’re going to make sure that oversight is there.”

When asked by ConvergenceRI about whether McKinsey & Company should be excluded from consideration from the bidding to write the 2030 strategic plan, given its past bad behavior, McKee said he was unfamiliar with the problems with McKinsey. ConvergenceRI responded: “Just ask Attorney General Neronha; he can provide you with the details.” No other media news outlet reported on that exchange in their coverage, despite getting an A-OK sign from one of the top reporters in the state. Why is that?

To read this story in its complete format: