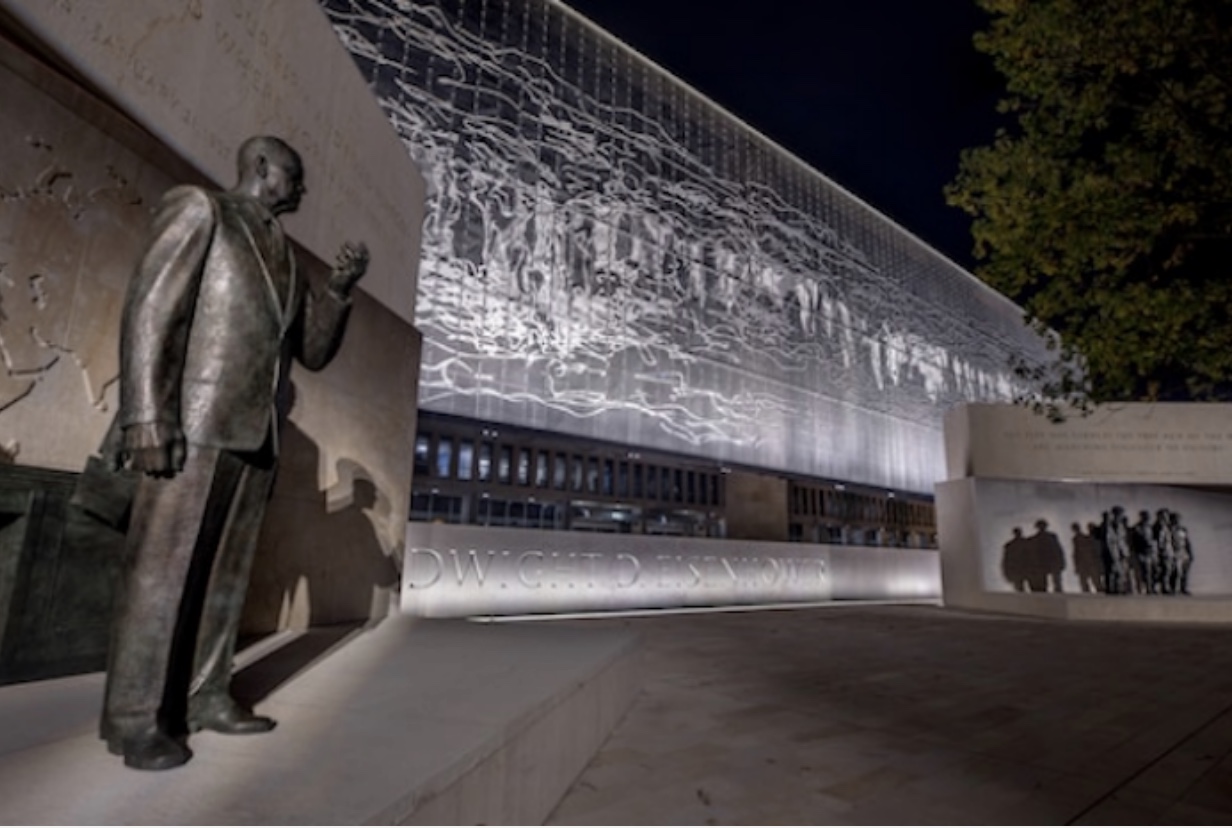 Gehry Ike in its kitschy glory – by David Brussat

by David Brussat, contributing architecture writer – Architecture Here and There

Frank Gehry’s monument to hims– oops, I mean to Dwight Eisenhower, does not open to the public until this Sept. 18, pushed back by the pandemic from May 8, the 75th anniversary of his victory in the European theater of World War II. Even if it does open then, it should never have opened at all. Donald Trump should have canceled it upon becoming president, before ground was broken later that year. There’s no love lost between him and Gehry, so what ever happened to the Donald’s mile-wide vindictive streak?

Not that all hope is lost. The cancel culture, in the person of our priceless iconoclasts who topple statues regardless of any link to the America they detest, is sure to come for Ike. As our 34th president, he barred gays and lesbians from the federal workforce. He cozied up to dictators and even staged a coup against one. Anyway, who cares what Ike did? He is a dead white male. Deplinth him, or leave him be, whatever. Gehry’s memorial knocks Ike down and dishonors him just by existing.

Where is Trump? Do your job!

I have probably written more columns and blog posts on this memorial than any other topic outside of Providence. I grew up in Washington, its classicism is in my blood, and although I acknowledge that today’s District of Columbia is already marred by an overabundance of modern architecture, I instantly considered Gehry’s Ike design a personal insult. His first effort to invade the nation’s capital was an addition, rejected, to the Corcoran Gallery, near the White House and where as a boy I took an art class. I admire the work of the National Civic Art Society in its steadfast opposition to the Gehry Ike, which almost succeeded. My writing on the issue is accurate but I make no claim to objectivity. Gehry is a menace and an abomination, and there is no better proof of this than his adoration by the vast majority of architecture critics, that ridiculous herd of independent minds.

For example, Philip Kennicott’s “The new Eisenhower Memorial is stunning, especially at night,” in the Washington Post, is Gehrian in its absurdity. The piece is almost as wacky as Gehry’s design. That design features a metal scrim “tapestry” of the Normany beaches as they look today; two larger-than-life-sized statuary groupings that depict his generalship and his presidency; and a life-sized statue of Ike himself as a boy sitting on a wall and looking forward – we are to imagine – to his accomplishments. The memorial is surrounded by the most tedious environment of bureaucratic modernism “with few lovable features,” as Kennicott puts it.

Oddly, after that admission he describes that setting as a “nice surprise”:

The architecture of the surrounding buildings, including the Air and Space Museum and the National Museum of the American Indian, has an appealing unity. The stone color is similar, and there are common elements in some of the design vocabulary. The benches and planter boxes, hard-edge and scrupulously modern, could easily wander off-site and live happily at either of the two museums that face the memorial.

A charming literary device, but it is tough to imagine the memorial’s benches and planters seeking shelter among buildings “with few lovable features.”

The entire memorial is an exercise in modernist kitsch, especially Little Ike. The statue groupings are taken from famous old photos of Eisenhower talking to the troops before D-Day and talking with three men in the Oval Office. In a more conventional classical monument these relatively bland groupings might speak to Eisenhower’s greatness, but in the context of the huge tapestry and the cockeyed blockishness of the walls against which the statuary groupings are set, the sculptures may actually rival Little Ike in sentimentality.

Gehry had a hard time figuring out how to soak the Little Ike trope for every centimeter of its potential cringeworthiness. At first, Little Ike was supposed to be the boy looking forward at the achievements of the man. Then Little Ike was purged from the memorial. Finally he reappeared, not as the boy but as the man’s memory of the boy. Is there a plaque at the memorial where this confusion is straightened out for the understandably baffled public? I don’t think so. As they say, any joke that requires explanation falls flat.

The funniest part of Kennicott’s piece is unintentional. If it were written with a critical, mocking eye instead of with drooling admiration, it could be said to use repeatedly a form of Latin humor called litotes. Litotes is defined as an “ironic understatement in which an affirmative is expressed by the negative of its contrary – e.g., you won’t be sorry, meaning you’ll be glad.” (Sorry. I learned about litotes from a buddy in college and have waited my entire career for an excuse to use it.)

Kennicott’s description of the site’s surrounding architecture as having “few lovable features” is a great example of litotes. The tapestry, he writes, “isn’t entirely successful.” Its image of today’s Normandy beaches “isn’t easily legible.” The image’s abstract style is “a little less disappointing” in daylight. (That’s because by day you perceive it as just a fence rather than a work of art.) If you read these examples of litotes with a tone of amusement at Kennicott’s attempts to minimize the tapestry’s failures, it is not just funny but revealing. What he really means “is entirely unsuccessful,” “is hard to understand,” and “a total disappointment.” Now you have an accurate description of the whole memorial. Of course he can’t admit that. After all, he is part of the memorial’s Praetorian guard.

Kennicott’s reverence for the Gehry style emerges in his description of how the architect articulates the Normandy beaches:

“In the end, Gehry sketched the cliffs at Pointe du Hoc freehand, in his characteristic drawing style — a herd of frenetic squiggles, like a jazzy, elongated Rorschach blot.” Of course it looks nothing like what it is intended to depict. Originally, Gehry had proposed the Kansas landscape as the subject of the tapestry. (“What Kansas landscape,” one might ask.) This didn’t exactly thrill the Eisenhower family, who wanted to highlight Ike’s accomplishments (D-Day), not his beloved wheat fields. “Changing the design … was crucial to convincing the family to support the memorial,” writes Kennicott.

The behavior of Ike’s family during the long debate over his memorial was deplorable. First they were against it, rightly so, arguing for a modest statue more fitting to his character. Then, near the end, in the face of Eisenhower’s famous dislike for modern art, they pulled a surprising switcheroo to support the design. The family’s failure of will is emblematic of the cascading failures of will in our nation’s current refusal to defend its own culture. Unwittingly (it may be hoped), Ike has been betrayed by his family.

Kennicott wisely celebrates the Gehry memorial at night. By day, its flaws are obvious. By night, they are whitewashed by the science of illumination. So why not turn off the lights? After all, democracy dies in darkness.

Gehry’s architecture is all about chaos. He once told a biographer: “Life is chaotic, dangerous, and surprising. Buildings should reflect that.” This total absurdity perfectly reflects the current moment of toppled statues, antifa riots and cancel culture. Eisenhower as general and president valued orderly management, not the “team of rivals” style of other leaders, such as Lincoln. So Gehry’s design for the Eisenhower memorial flouts not only his personal modesty but the character of his leadership and manhood.

Gehry’s memorial does not twist and turn as most of his buildings do, but it does intentionally reject traditional memorials. In rejecting traditional memorials he rejects tradition, and in rejecting tradition he rejects the founding fathers’ vision to pursue the nation’s ideals by acknowledging failures and seeking their correction. Instead, Gehry sows ugliness and confusion. He seeks to assist in the radical project now under way not to improve but to destroy America. He was born a Canadian and is said to be a genius, but, to be charitable, maybe he does not really understand the role he plays in architecture and the role his architecture plays in the life of his adopted nation. His Eisenhower memorial is abominable because his work is abominable, and his work is abominable because, let us say, he himself is not entirely praiseworthy. (An example of litotes.) Not long ago he stated that “98 percent of of what gets built today is shit.” Precisely, and he shares much of the blame. It is time for him to retire his warped T-square.

Editor’s Note: David, tell us what you really think!