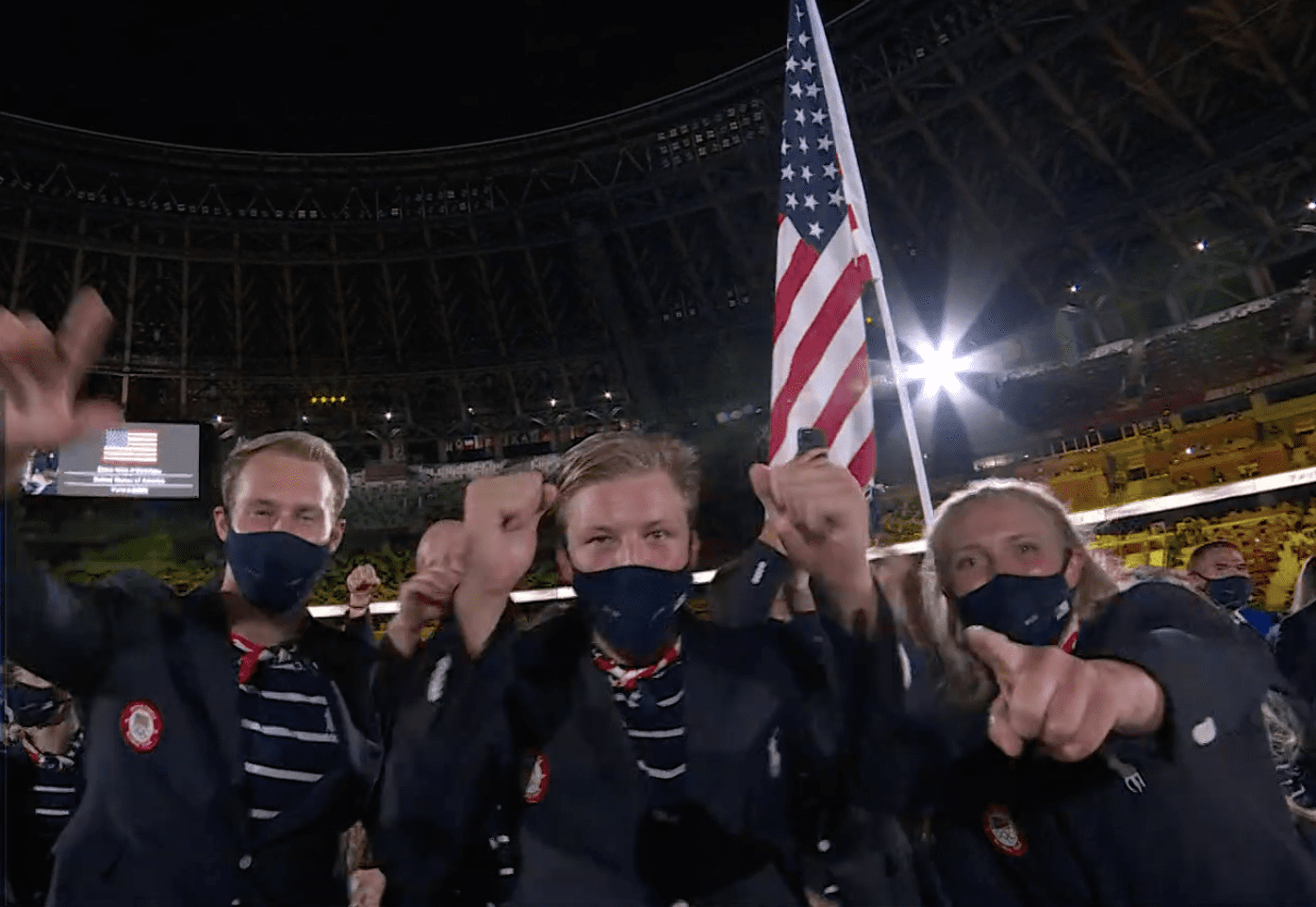 Let the Games begin! Tokyo has gathered the best youth athletes in the world and is determined to play the games, despite all the obstacles they had to overcome, and still the unknown ones that they yet must navigate. The hashtag is an appropriate one – #StrongerTogether

It finally began – the XXXII Summer Olympics originally scheduled to have taken place a year ago in Tokyo. Japan finally lit the official cauldron and kicked off 20 days of sports, sports and sports! The parade of nations entered the near empty 65,000 seat stadium in a more made-for-television event, but it didn’t curb the enthusiasm of the athletes that marched in and mugged up for the cameras. As each nation was announced to take their moment on center stage, their fashion styles were on display for the world to see. The opening ceremony fashions reflected the nation that they were representing, from the bit over-the-top, to the ultra-conservative and understated. One thing was evident in the faces of all who marched into the stadium was that they were happy to have finally made it and they were going to have fun and embrace this moment – their moment, no matter what!

Leading up to this debut, there were still questions and doubts if even the Olympics were going to begin, as late as the day before. The worldwide pandemic has reemerged, some say in its 4th wave, and numbers have soared in recent weeks. COVID-19 breakouts have spread throughout Tokyo and has spread into the Olympic village whereas at last count 89 athletes who were expected to compete were placed in quarantine or not allowed to make the trip with their teammates.

The Olympic committee was determined to press on. After the pandemic forced the cancellation of this once in a four-year event in 2020, it was decided by the Olympic committee to put off the event a full year and see if it could be held in 2021. The option to delay the games, once again, was discussed but quickly dashed considering the time between these Olympics and the next are now shortened to three years. To put Tokyo behind the already selected three summer game host would be 11 years at the earliest. Considering the amount of prep time, it takes a city and region to get properly prepared, and the amount of money is over whelming, and although many of Tokyo’s venues are new and meet the current criteria to hold the 2020 (2021) games, they would be out of date that far into the future. To ask a city to make the investment to hold these games, cancel them, and rebuild down the line was not a consideration for Tokyo.

The games will go on! Beginning with a noteworthy, touching tribute to the 11 members of the 1972 Israeli team, who were brutally murdered by Palestinian terrorists in the Munich Olympics. It was noted that there has been never any public acknowledgement of this event by any Olympic officials or any host of the summer games until now, when a moment of silence was observed.

The opening ceremonies began like many did in the past, showing the world the history and rich culture of Japan. Artist expressions, music, dance, a drone artistic display that lit up the clear moonlit Tokyo sky, and we went on a trip back in time to where everything began for Japan and bridged to the current modern era. It was all put on display for the world to see and to make the statement that Tokyo was going to hold these games and that even though there is a pandemic, this very proud nation was going to push ahead and show the world that we will get through this! We will persevere! These games are not only for Tokyo, not only for Japan, but for the world and for all of mankind.

As in past Olympics, the secret of who would be the person that would have the honor of lighting the Olympic flame and get the games started hung in question. In a surprise move, Japanese tennis player, much in the news of late, Naomi Osaka, came out from the dark recesses at the base of the flight of stairs to run up with the torch and light the flame. This was the athlete’s first public appearance since she pulled out of the French Open back in May. She was flawless in executing what for anyone could be a nerve wrecking moment with all the eyes of the world on her. The secret seemed well kept as the NBC media team had little to say, prepared comments being sprinkled throughout the opening ceremonies from their scripts.

When the closing ceremonies quelch the flame 20 days from now, 11,000 athletes would have competed in 339 events. Olympic records will fall, as well as world records will be shattered. The most important message will be sent, these games will go on and be successful. They will even, for a moment, make us forget about conflicts, about differences, and yes, the pandemic.

So, it is now time for us to sit back and get back to some normalcy moments, get wrapped up in these games, and cheer not only for our own country but for all these athletes that have made their way to the world’s center stage. It took a lot for them to get here, and they deserve all the applause and cheers that we can give to them.

So, LET THE GAMES BEGIN!