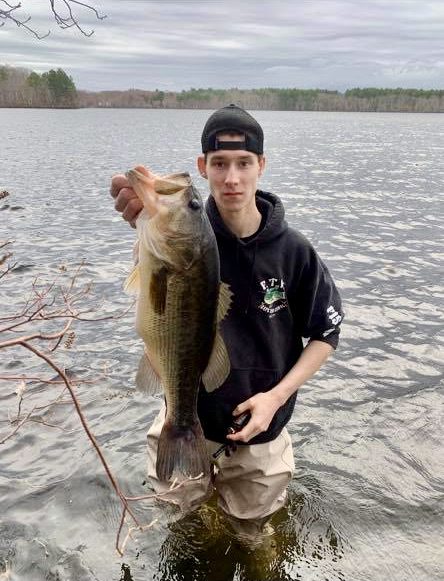 Rhode Islanders continue to slam largemouth bass and a few smallmouths daily. Quite a few lunkers are posted each day on the Facebook group page “A better 401 Fishing” as the weather permits.  If one is lucky enough to catch a possible new state record, here are recommendations on how to officially get it done and release it alive.

1. Take said fish, whatever the species, and put it in a large 55-quart (or larger) style cooler that has been 3/4 filled with pond water from where the fish was caught.  IF you don’t have one with you call family or friends to bring you one – Pronto!  The cell phone one uses for pictures has other uses!

2. Keep your hands out of the gills and do not lift the fish out to show people. The more the fish is removed from the water, the more stress sets in, and it will die.

3. Use pond water from as deep as you can reach down in the pond as the colder water holds more oxygen. This is critical in the summer months.

4. Use an aerator. The fish will burn through the oxygen rather quickly in a cooler. Keeping the water heavily oxygenated reduces the stress on the fish.

5. If you put the cooler in an open truck bed put something over the cooler to keep the sun off the cooler. You want the fish to endure minimal stress. Only takes a few minutes for that water to heat up.

6. Sandy Bottom Bait and Tackle is one official RI DEM weigh station. Call ahead and let Dave know you’re coming so he can be prepared. He will weigh your fish and fill out the official paperwork. Other bait shops may do it officially, but I’ve worked with Dave now for years, so hence the public recommendation. Call ahead and make sure whatever bait store you are going to is an official weigh station and again let them know you are coming in with your trophy catch.

7. Once weighed, take the fish immediately back to where you caught it. Just like a heart attack – seconds count! The fish will have one if you stop off at someone’s house to show them the fish.

8. Take the fish, one hand under his front, and one under the tail, and propel him through the water to get the pond water flowing over his gills. It will take a few minutes for the fish to recover, but when he is ready he will swim off on his own.

The opening day of Trout Season has been pushed up to April 7th so the crowds will be lessened due to distancing needs around COVID. But safety is always a concern, and you should still be aware of those around you – especially of the rookies and newbies.

Being alert will also keep you from ending up like the guy in the photo and an unwanted trip to the hospital with $938 removed from his wallet when the hooks are removed. The culprit was 12 feet away when she did that! A pair of cheap sunglasses is a must as they will always protect your eyes against flying hooks.