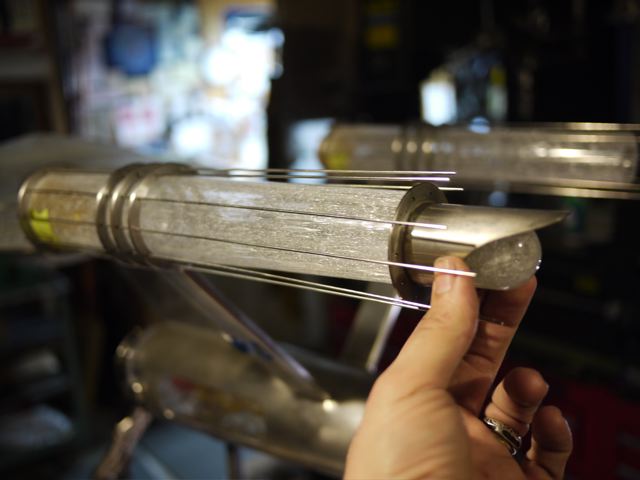 The Enterprise, as my cousin Rik Allen sees it now, sits in Rod Roddenberry’s home. Rod commissioned the piece, it belongs with him, he owns it, as well it should be. His father, Gene Roddenberry’s vision, started the whole thing, and those of us who have boldly gone where no man has gone before are better for it.

The piece itself is in its rightful place, the Roddenberry home, just as the creative force that brought it together is where it belongs, The Allen home. Just as a sculpture is pieced together in small increments, so too is the desire and ability to create it. A person isn’t born with the ability to create art, or music, or to write, it is an innate ability that is nurtured, and grows from the desire to see if you can actually pull it off. And when you do, it is yours forever.

Rik certainly pulled it off, but not without a price. Life is never kind enough to bestow upon us a vision, and the patience needed to master the skills necessary to turn that vision into something tangible, without extracting something in return. The ability to create something so visually stunning, and powerful is the culmination of a life lived with its fair share of loss, and lessons learned from those losses.

My Uncle Fred lost his life when the plane he was in crashed into the woods near Glastonbury, Connecticut. Me and my father drove for a few hours in the middle of the night on the night of the accident, drinking coffee, smoking cigarettes, even though we seldom smoked, and keeping each other awake so we could be part of the search party. It was a strange, tragic adventure, one that brought us closer than either had felt in years. I was twenty-three, and Rik was seventeen or eighteen when he lost his father. I was profoundly affected by the experience.

It’s a strange world inside of our minds. I have no idea if that experience had anything to do with the creation of Enterprise 1701, but myself; I’m transported in time back to that ride through the woods on some deserted roads in the dead of night when I see these pictures. Maybe it’s because Rod Roddenberry honors his father’s vision by keeping the Star Trek world alive and vibrant, and Rik’s father, wherever he is, had his part in what is and what will become of his son’s passion and talent. Maybe our fathers are connected somehow, in some way, that we too will understand eventually.

Happy Father’s Day, Fred, Bob, and Gene, we’ll do our best to keep the dream alive.