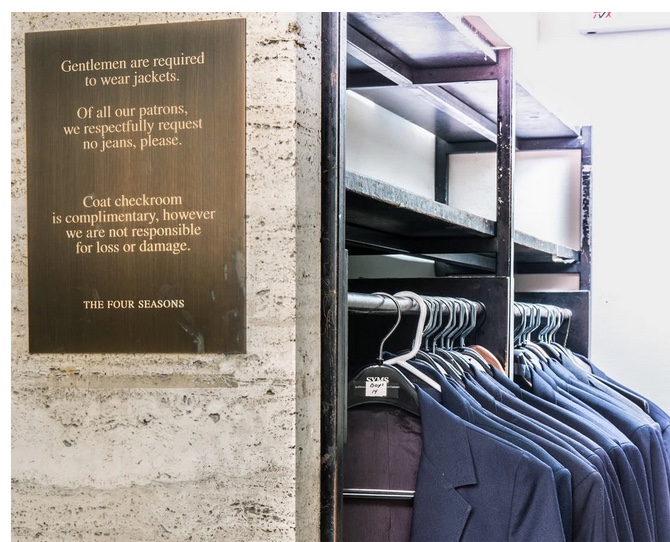 Dressing for the part, at the RI State House

Photo: A photo from 8 years ago, 2013, at The Four Seasons, in the New York Times, “Dressing Up the Loaner Jacket”, an article about dress codes waning in fine dining establishments.

Years ago my uncle owned what was called a “lounge” on the Central Falls/Pawtucket line. He wore a uniform, of sorts, each and every day at work. Black pants, a white shirt, a clip-off tie, and a red vest. The clip-off tie was a life-saving measure after a patron had once grabbed him by the tie around his neck. It’s part of the “bar” business. He never called his bar a bar.

Of course you had to be “of age” to visit the Latin Quarters. But the men also had to wear – a jacket. Ties were encouraged, but optional (remembering the necktie incident he didn’t really enforce this). If you came in after work, maybe dressed blue-collar and didn’t have a jacket with you – you can go get one in the loaner closet. Some men even draped a tie around them. And that was that. Simple rules, simple compliance.

He felt as though it lessened the expectation of the experience he provided. He wanted ladies to be included, comfortably, going there, and he also thought it sent out a message of behavior expectations. He started to served food, not because he wanted to, but if you are drinking – with eating – there was another level of personal behavior messaging, too. Early on Saturdays you could bring in the family – though looking back it was probably a violation of his license to do so – but he wanted people to know his place was different, it wasn’t off-bounds, or shady, or a place for raucous behavior. It was a place you put a jacket on and wrapped the tie around your neck and you were welcome as one.

At the entrance, in a little vestibule for umbrellas and heavy coats, he had about 6 coat jackets hanging – black, blue, tan – and a dozen or so ties. It started as he would find the stray left-behind while cleaning up. More ties than jackets. And people would eventually find their possessions on their next visit. But slowly the collection grew.

The loaner closet was popular back then, and may still be so today in places where protocol calls for it. Fine restaurants in New York, modest places in Rhode Island. You could find them in a priest’s office in churches, and in funeral homes. Not sure about the RI State House. Good question to ask, though. Might be a thought.

Newly elected Sen. Acosta wants to wear what he wants to wear to the RI State House. And that doesn’t include a “uniform” of a jacket – and tie. He says his electorate didn’t elect him by his wearing of a jacket and tie – he wants to “look like them”” when he serves them, he says, – he can govern without wearing this uniform. When this topic became perfect fodder for talk radio last week, many gentlemen called in to say that he should walk around Central Falls on a Sunday or whenever an event that requires “appropriate dress” is happening. “We dress up!” said one caller. “We dress for what the occasion calls for,” said another.

Acosta goes further in saying such dress is the “uniform of the white man” – referring to his time teaching when he was required to wear a jacket: “I came to realize that what I was doing was reaffirming to all the poor black and brown children I was teaching that in order to be successful you had to try to look and approach whiteness as much as possible.”

Dress for the job you want to have

A common piece of advice among young leadership forums has always been to dress for the job you want to have – one day. Dress for who you want to be. How you want to be treated. Yes, times are changing, and the days of dress codes are definitely loosened. But when you run for office – for what is thought of as an honor to serve in the RI State House – and you win, you are due respect. And your respect for that office and your temporary seat in it goes without saying. We’d say that’s a dress-up occasion. Ties? OK, optional. Unless there’s a big event. Suits? Not necessary. But jackets. You’ll see most ladies wearing them, too. It gets hot in the summer, taking them off in those insufferable moments or in private offices is quite acceptable.

The State House dress code will be voted on on Tuesday

“I’m sure you are an individual, you love your individuality. I’m sure your constituents don’t care,” Senate Leader Ruggiero, told Acosta. Ruggiero is the one who is proposing the informal dress code be now put into policy. “But as for decorum in the Senate chamber, that’s how it was since before I arrived. And it’s been a while. What you do when you come out of this building, I don’t mind at all. I don’t care if you take off all your clothes once you get out of the building and come home,” Ruggiero said.

“But I think it’s offensive to people not to be dressed appropriately in this room. And that’s my position.”

The Rules for the 2019-2020 session read: “All persons present on the Senate floor while the Senate is in session must be properly dressed and the President must apply this rule by appropriate means.”

Acosta plans to propose amendments during Tuesday’s Senate debate. There is also a possibility that the dress code for guests may be amended.

The times are a’changin’

As a year of pandemic has changed many things, our dress is perhaps the most notable, because we have been ZOOM-ing from home – hopefully with pants on, but not necessarily so. We’ve been casual, with brightly colored scarves tossed over sweatshirts, and button down shirts with no ties (just fine). Even the rare coffee meeting seems to be much more casual. Having gotten dressed up for a meeting with a city official the other day, it was a Friday, and the official was in casual pants and upscale colorless shirt, while I sat in a woman’s version of “suit and tie” – my feet bemoaning a year in slippers, now called into heel duty. Many things will change, but many will return to the world as we knew it.

One of the reasons we’d tune in to Capitol TV on those long hot days on the un-air conditioned Senate or House floor was to see how those poor people were doing and who had discovered the clip-on fans to put on their desks. A few agendas were turned into handheld fans, flapping here and there. Most of the men stayed in their jackets – some with ties, some without. Ladies took off blazers and sweaters, and many bright sundresses made a rare end-of-session debut. One legislator last year was down to his white undershirt, but we later learned he was not well and just couldn’t take the heat. Of course, one young’un rebel rouser (interesting how ineffective she was, serving only one term) pushed the envelope first with a white tank top, and later with a graphic tee. Hey, come to think of it, maybe that inspired this year’s dress code initiative! And maybe her constituency didn’t elect her to serve them in that way.

What our community says…

We did a very informal survey on Twitter about dress code vs. no dress code. 91.3% said dress code.

There’s a time for community work, bonding with your people, informal get-to-know-me times… and a time for being the professional they elected you to be… saying I’ve arrived, I’m serious, and I’m ready to work – for you. We googled…

That’s our take on this buttoned-up topic! We wish Sen. Acosta, Sen. Ruggiero, and all our representatives at the RI State House and their COVID-19 off-site locations well. We say “obrigada” for dressing for – our – success.