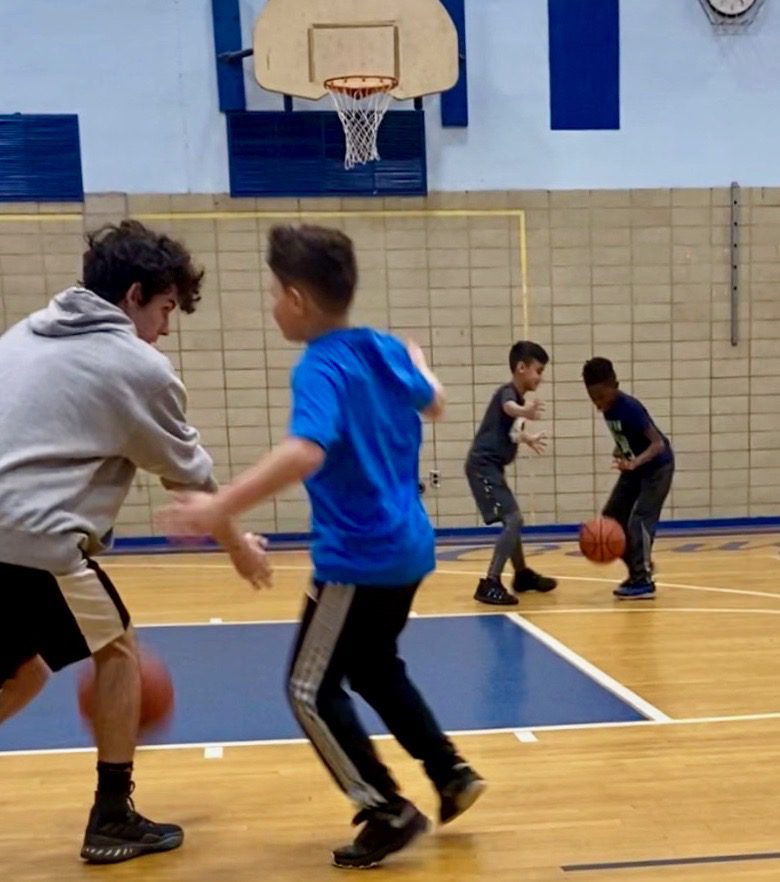 The program began as an idea to utilize the city’s school gyms on Saturday mornings. It was spearheaded by Cranston’s legendary Coach Ed Stebbins and Cranston Recreation Director Settimo Ricci, who was the city’s recreation director from 1953 to 1968. The concept was simple, to open the city’s school gyms and instruct boys in the game of basketball. Back in those days there were no league sports for girls so basically it was a true “boys club” for many years, but that was going to change in a big way many years down the line.

The original plan was on Saturday mornings from 8:00 am to 10:30 am boys in grades 4th thru 9th grades will come in and get basic instructions in the game of basketball. The age groups were divided into two groups where they would be taught the game from the ground up and then each week play games against each other to apply those lessons on the court. Then, from 10:30 am to 1:30 pm the high school age boys and the adults would come in and break up into two groups and play games, for this group there was no instruction period just pick-up games.

The program took place in schools across the city, Park View Jr. High, Cranston Senior High (later to be renamed Cranston High School East), Hugh B. Bain Jr. High, and the Gladstone Street School. Schools would be added to the mix, but they had to be built first – they were Western Hill Jr. High and Cranston West High School. These schools were selected for several reasons, they were regionally spread out through the city and they had two gymnasiums and was able to accommodate the number of children that would attend each Saturday morning, which grew every year.

The attendees would be separated into teams for their age group and play each other. But Ed Stebbins was a firm believer that competition was good for the body and spirit so he and each of the participating instructors came up with an idea to reward those boys who came each week and drilled and scrimmaged. They created an inter-city tournament where all the schools would play each other once in an end of the season City Recreational Tournament.

As the program went from Stebbins to Joseph Venttitullo very little changed, and the program was popular and continued to run successfully. The attendance numbers continued to grow, and the Saturday morning basketball program was something the city’s youth came to look forward to. Boys became accustomed to begin playing basketball the Saturday after Thanksgiving and running right through to the fourth Saturday of March (when the shift went into the baseball season).

As the years went by, the people that were involved with this program read like a Who’s Who in the City of Cranston. The Recreation Directors who followed Settimo all believed in the program; John Sosia, Dennis DeJesus (who not only attended the program in his youth but became an instructor at Park View as well), Barry Fontaine, Bob Clarkin and current Recreation Director Tony Libertore, all saw the value in the program and continued to make it the cornerstone of their winter recreation program. Tapping instructors like CCRI’s legendary men’s basketball coach Vincent Cullen and high school coaches like Joseph Evans, Herb Nicholas, Lou Gelsomino, Walt Campbell and future high school coaches, Paul Silvia, Jim Morretti, John Maio, Keith Croft, Richard D’Iorio, and yes the author of this column, John Cardullo, to name a few.

As the years passed, the program continued to evolve but held true to its roots, to teach and instruct children in the game of basketball from the ground up. The attendance numbers held strong and in the late 1980s the program opened up for girls to come in and learn the game of basketball. The ladies didn’t just slowly come in – they poured in. Shirley McGunnegal was the first girl to break the barrier only to be followed by Sue Burns, Tracy Quinn and Cassie Venus to name a few. They all began their love of basketball in the Saturday morning program and took their games to a level that was only a dream at one time for girls. All three went on to play high school basketball and each scored 1,000 points in their career and went to play at some level of college.

Cassie Venus who played for Scituate High School recently said, “if it wasn’t for the Saturday morning basketball program, I may have not played basketball beyond that program. It was intimidating to play boys every week but it made me a better player and I think playing the boys and the encouragement that I received from the instructors, and the boys, made me more determined to play at the high school level”.

Sue Burns, a Cranston East Lady Bolt star, and the first girl ever to go to Park View’s Saturday morning program agreed, “I was not given any special treatment; I practiced with the boys and played against them. My instructor at Park View then worked with me after my age group went home. I think because of this I was able to go on to play at a higher level.” As the years passed, you could see the impact the program has had on girls’ basketball in the city. Currently all four of Cranston’s middle schools have become successful programs, and in the 2018-19 season Hope Highlands, Huge B. Bain, Park View, and Western Hills made the state middle school play-off’s tournament and Western Hills made the finals. Most of the players on each of those teams had their first experience in basketball at the Saturday morning basketball program.

The program today is as strong as ever, the numbers of children coming out to learn and play basketball the Saturday after Thanksgiving is as traditional as the football games themselves. As one parent observed, “when I brought my son the first week, he wouldn’t let go of my arm and reluctantly participated in the drills and the games. By the third week he virtually jumped out of the car while it was moving; he was so excited to get into the gym and play basketball.” Another parent noted, “the instructors are great, they make learning the game fun. It is no big secret why this program has been so successful for all these years; it’s all about the children. It’s very affordable and the children are the number one priority.”

It’s safe to say that Cranston Saturday Morning Basketball will continue going for many years to come. Not too bad for an idea that was just to keep children moving in the winter months.