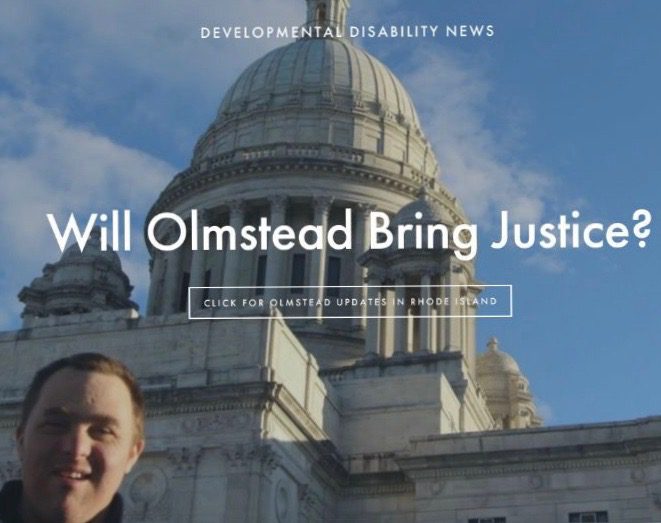 The Chief Judge of the U.S. District Court in Rhode Island has ordered an independent monitor to bring him a new plan for implementing a 2014 civil rights agreement that seeks to integrate people with developmental disabilities in work and leisure activities in their communities by 2024.

With the state falling short of its job-placement goals in two of three categories in 2019, as well as other developments in recent months, indicators are mounting that the current approach isn’t working.

In an order issued Feb. 3, Judge John J. McConnell, Jr. has charged the interim court monitor with gathering a wide range of data and information from multiple sources, including comments from people with developmental disabilities, their families and representatives of the community, as a baseline for discussions on the way forward.

McConnell gave the monitor, A. Anthony Antosh, until April 30 to complete the information-gathering process and until August 30 to complete the plan, in collaboration with the U.S. Department of Justice, state officials and community representatives who serve on the Employment First Task Force, a committee created by the consent decree as an advisory group to government.

The judge went so far as to specify what agencies and officials Antosh should seek out, including “any interested legislators re: consent decree policies and funding.”

The process appears poised to capture the recent recommendations of a special legislative commission on the state’s fee-for-service funding system, as well as an ongoing rate review being conducted by outside consultants at the behest of the state Department of Behavioral Healthcare, Developmental Disabilities, and Hospitals.

• Policies, activities and funding needed to achieve substantial compliance by 2024

• Obstacles and barriers to full implementation

• Structural components for a compliance plan

The standards for compliance have become a matter of debate between lawyers for the DOJ and the state in the context of a prototype for the 2014 consent decree, the so-called Interim Settlement Agreement (ISA) of 2013, which affects about 88 former sheltered workshop employees who once attended the Birch Academy at Mount Pleasant High School and later worked at the now-defunct Training Through Placement.

The city of Providence was released from federal oversight in connection with the ISA last September in unusually celebratory courtroom proceedings, with accolades from all sides on the way it has changed the culture at the Birch Academy and turned around the lives of students.

But the performance of the state on implementing the ISA has not received such rosy reviews, an indication it is struggling with the consent decree as well.

In the ISA, the city and its school department have been responsible for opening the doors to integration through inclusive classes and internship programs, while the state has been charged with picking up where the educational system leaves off, to match individuals with jobs and help them participate in activities of their choice in the community. The state’s role in the ISA mirrors its relationship to school departments throughout Rhode Island in the consent decree, except on a broader scale.

Statewide, the number of adults with developmental disabilities who s must be offered employment by 2024 currently totals 1,987, according to the state’s latest consent decree data. That number is a little more than half the population protected by the consent decree.

After five years and nine months of the decade-long enforcement period of the consent decree, a total of 894 people, or 45 percent of the target number, have landed jobs, the state said in a report that captures progress through December 31, 2019.

The state exceeded the cumulative goal for employment in 2019 by more than 100, but missed targets in two subgroups, named “youth exit” and “sheltered workshop,” labels chosen to reflect whether individuals were young adults who had recently left school or working in enclaves at the time the consent decree was signed.

The state has never met the job targets for the “youth exit” group, which also represents the segment of the population that is applying for adult services for the first time, often from agencies that are hard-pressed to meet the needs of existing clients, let alone take on new ones.

In a third group labeled “day program” to describe those in day care centers in 2014, the number of new jobs recorded through 2019 rose to 385, or 160 over the goal, enough to overcome the shortfall in the other two categories.

But the the pace of new jobs has slowed. There were only 14 new job placements statewide for the last quarter of 2019 and 74 for the entire year. The remainder of the new jobs were recorded in previous years.

State of RI table of cumulative employment totals, by quarter, in 2018 and 2019 under terms of Consent Decree

One group not counted in the target population for employment is “youth in transition,” a total of 1,201 high school students with developmental disabilities, or 32 percent of the entire class protected by the consent decree. Many of them are expected to enter the labor market in the next several years.

Last fall, within the limited scope of the ISA, Antosh’ predecessor as court monitor, Charles Moseley, found that the state has made considerable progress in improving the lives of former Birch students – but not enough to warrant the end of federal oversight.

McConnell asked Antosh to review materials developed by Moseley, which include a 70-page exhaustive assessment of the state’s performance in meeting dozens of specific standards in the ISA.

In a draft report, obtained by Developmental Disability News, Moseley said the state has made considerable progress in changing the lives of the nearly 90 people still protected by the ISA, – but not enough. He completed the report at the end of September.

• The number of people it had connected with jobs

• The number of hours logged by the job holders, some of whom said they wanted to work more

In a notice to Judge McConnell submitted in late December, the DOJ said that while the state “made initial progress in implementing the Agreement’s provisions, recent monitoring has showed that the state’s efforts have stalled such that it may not independently act to achieve the requisite outcomes before the Agreement ends.”

In its reply, the state acknowledged that it had not found jobs for 15 members of the protected class but said the barriers included health and behavioral problems, family resistance, and other issues.

The agreement itself says that “substantial compliance is achieved where the State and City have implemented all of the provisions of the Interim Settlement Agreement for all individuals in the Target Populations.”

In the context of that language, the state lawyers maintained that implementation means it has “mechanisms and/or policies” in place to carry out any of the specific requirements of the agreement, whether or not a particular numerical target is reached, as long as the “Court is satisfied that the State is on track to reasonably reach the requirement.”

Those who don’t want jobs can file for an exception, or variance, with the monitor, but Moseley said he had not received any such requests from the 87 members of the protected class. The state’s lawyers said officials wanted to keep working with the 15 unemployed persons rather than have them opt out of the search for employment.

Moseley’s report goes into great detail in evaluating the state’s performance on dozens of standards, many of them bureaucratic, that are nevertheless important for creating a high quality system of social services designed to sustain itself after the consent decree is long gone.

Among other things, the standards cover multiple aspects of:

In several areas, Moseley said he did not find enough documentation or evidence to make an assessment, although the state says it has supporting materials to show it has met the standards in question.

For example, Moseley said he didn’t have enough information to determine whether the state is following proven, or “evidence-based”, practices in its approach to employment supports for adults with developmental disabilities.

He also said the state hadn’t given him enough documentation to show whether the private agencies delivering services have the wherewithal, or capacity, to serve adults with developmental disabilities as required by the ISA.

Both Moseley and Antosh are experts in the research on supporting adults with developmental disabilities.

Antosh wrote the proposal that established the federally-funded Sherlock Center on Disabilities at Rhode Island College and served as its director from its inception in in 1993 until October, 2019.