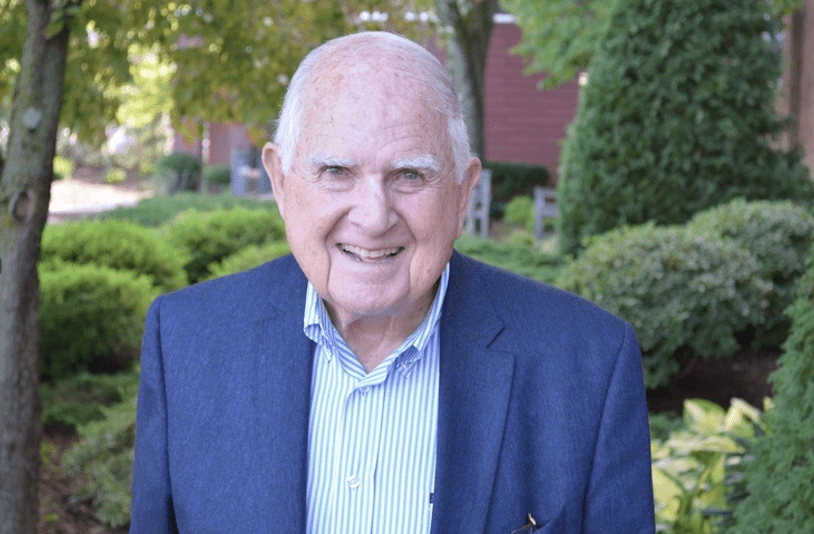 Over the years, Providence business leader Arthur S. Robbins has earned a shelf’s worth of honors for his leadership, citizenship and philanthropy in the community.

He recently received another, this time from a health organization he helped shape: After 41 years as a board member, Robbins was appointed chair emeritus of the HopeHealth Board of Directors.

In the mid-1970’s, when Robbins first got involved with the organization, HopeHealth was one of just two hospice providers in the United States. Today, it’s a regional leader in hospice, palliative and home health care. Robbins looms large in that success story: As the organization helped blaze the trail for hospice in the U.S., Robbins was at the governance table. He was a passionate advocate for creating a center for inpatient hospice care, at a time when very few health systems understood or appreciated the need for such a facility.

“Arthur was steadfast,” says HopeHealth Chief Medical Officer Edward Martin, MD, MPH. “He was this very strong voice on the board: ‘We have to do this for our patients.’”

Robbins subsequently led the fundraising campaigns that built HopeHealth’s first inpatient unit, the Hulitar Hospice Center, which opened in 1993, followed by the current Hulitar Hospice Center on North Main Street in Providence which opened in 2010 – the only freestanding inpatient hospice facility in Rhode Island. There, patients who need the most acute levels of hospice can receive the care they need.

“Arthur Robbins has been an absolute champion for end-of-life care in this community,” says HopeHealth President & CEO Diana Franchitto. “Through our inpatient hospice center alone, he has helped bring compassion and dignity to thousands of patients in their final days, and to their loved ones. That legacy will only grow.”

The Board of Directors, led by Chair Keith Kelly, named Robbins chair emeritus at a special ceremony June 29, 2022.

“Without Arthur Robbins, we would not be here today,” Kelly said. “Arthur was and continues to be a driving force at HopeHealth, and we owe him a tremendous debt of gratitude.”

Robbins, who is 89 years old, is the principal of Robbins Properties in Providence. He is renowned for his philanthropy and leadership in the community; among many notable contributions, he helped launch the Rhode Island Holocaust Museum, the Providence Warwick Convention & Visitors Bureau, and the first charter school in Rhode Island. He has served on more than 20 civic and nonprofit boards, including HopeHealth’s.

“It takes dedicated people to move any organization to greater heights,” Robbins said, reflecting on his move to chairman emeritus of the HopeHealth Board of Directors. “Having been a [HopeHealth] board member for all of these years and having seen what has happened in our organization after all these years, is truly amazing.”

For more than a century, HopeHealth has provided high quality, compassionate care to people in various stages of illness in Rhode Island and Massachusetts. Its roots began in home care in 1908 and then in hospice in 1976, coming together as HopeHealth in 2011 as a provider of home care, palliative care and hospice care. As the second oldest hospice in the country and one of the largest not-for-profit providers of palliative and hospice care in New England, HopeHealth has set the gold standard in serious illness and end-of-life care. HopeHealth is the major teaching affiliate for hospice and palliative care of The Warren Alpert Medical School of Brown University.