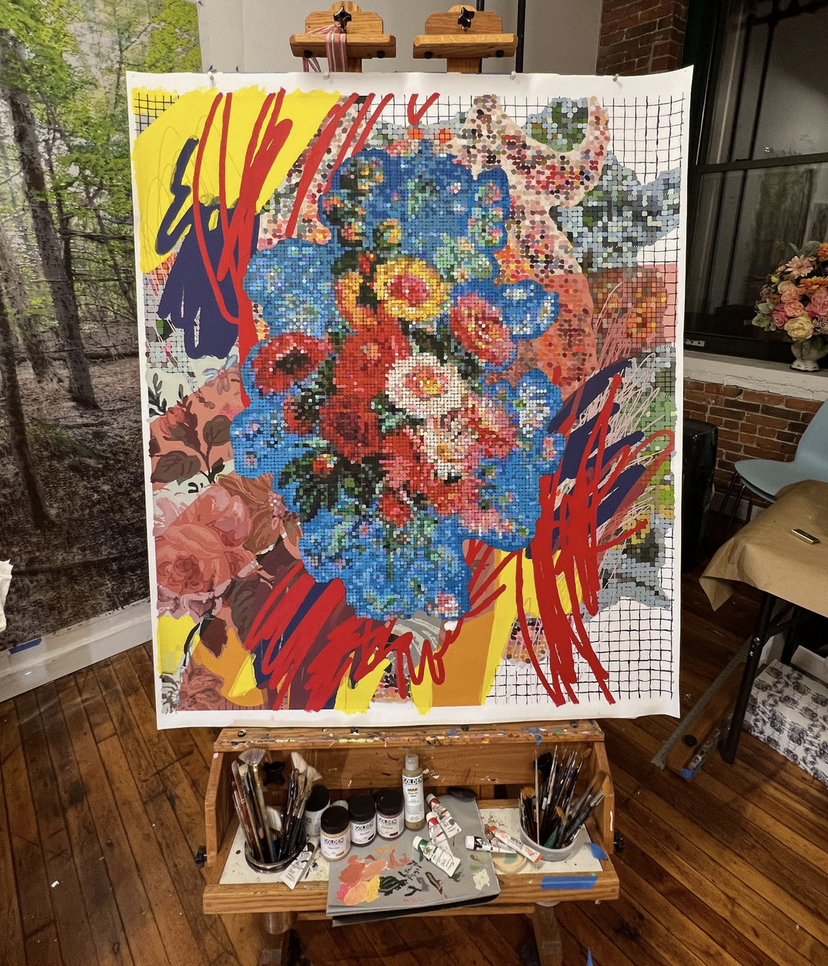 In a digital world, how can art on canvas reflect the changing technologies of reproduction and advertising? How has the COVID pandemic changed the way that we experience the visual world around us? What kind of imagery should adorn the walls of hospitals – in emergency rooms, in patient recovery rooms, in hallways and in sitting rooms, as a focus on healing and empathy? Given the way that private equity has reshaped ownership of corporations and consumer products, do we need a way to make those relationships transparent, as a cascading flow of brands and logos?

Providence painter Kirstin Lamb’s early paintings were mushrooming accumulations of appropriated images that grew out of the history of domestic décor, portraiture and still life.

Rendered in a style of artless caricature that masked her superior drafting skill, the encyclopedic scope of her imagery always suggested richer undercurrents.

Lamb’s early paintings and drawings reflected the vanitas tradition of Dutch Master still life. She tossed in every kind of object or image that might grace a home or studio’s walls, complicating these collections with her own striped and dotted abstract designs and further adding repetitive textile patterns and floral displays copied from collected ephemera, historical compilations of home décor, and reference works on domestic and feminine-identified crafts.

These led to burgeoning 3-D installations in the studio of individual works and groupings copied from her walls. Some hung salon-style, others were stacked against the wall or spilled onto the floor. The installations of pictures in her studio projecting into three dimensions induced the nausea of an infinite regress. [I curated one such installation in an exhibition studying women artists’ critique of the domestic sphere at the Art Complex Museum at Duxbury in 2017.]

Curious about Lamb’s latest work,  I sought to catch up on an upcoming solo exhibition at the Jennifer Terzian Gallery in Litchfield, Connecticut. I was hardly prepared for the grand scale of flower-filled paintings that nearly tumbled out the door of her Pawtucket loft.

The new Floral Remix paintings are four-, five- and six-foot mishmashes of blown-up, Warhol-like floral displays composed of intricately patterned surfaces. Lamb lifts her dotted nosegays and blooming medallions from antique tapestry and embroidered patterns and combines these with pixelated patterns that she derives from her own personal imagery.

Her blossoming forms, built up from thousands of small, structured brush-marks, crowd against the edges of the canvas, float on lattices and break apart in vast empty spaces. Their gently graduated hues expand from small arrays of squares to larger studded grids and contract again to tiny dots. Blazes and scribbles of matte cerulean, gold, and cadmium red cover zones of more refined detail, further scrambling the eye.

Emerging from the COVID isolation
These latest Remix works are destined for the Litchfield show, along with several sizable wall-paintings. These are humorous  trompe-l’oeuil copies of the drawings, paintings and other pinned-up scraps on her crammed studio walls. Lamb reassembles these images in orderly arrays and mimics them in her characteristic linear caricature style.

During the isolation of the Covid pandemic, Lamb shook loose from her old practice of hand-copying at the diminished “native scale” peculiar to her way of transferring her observations to paper. Drawing with small, hand-scaled marks had formed the building blocks of everything, from miniature portraiture up to her twelve-foot-long installations. By adopting new ways of incorporating I-pad and computer apps that would blow up her drawn and painted images at the press of a button, she’s become more versatile at working large.

In her own words, Lamb describes her combination of photographic and digital manipulations with labor-intensive handwork.

“I make a layered digital collage, using current and past paintings and patterns, and I cut and chop them, drawing in new marks and scribbles,” Lamb explained. Among its subcomponents, she continued, “The embroidery paintings were photographed or scanned and used as a base for compositions, combined and remixed with vintage wallpapers, cross stitch patterns and digital drawings.”

She said she finds a meditative quality in the repetitive mark-making involved in the “simple process of re-painting a textile or pattern, sometimes an invented image-generated textile, sometimes an actual knit or textile pattern [cross-stitch or embroidery]. The brush creates a one-to-one relationship of mark to stitch; each mark stands in for a move of the needle.”

Layers of art
After a lengthy process of planning the components and how they’ll go together, she prints out the hybrid composition, now a complex unified image, in acrylic inks on a large, yet-to-be-mounted canvas. This is the working surface that will become the painting.

She mixes a raft of hundreds of distinct colors of acrylic pigments, which she then brushes on by hand. Her ultimate forms and color-relationships, though hardly distinguishable from the underlying ink-jet pigments, glow with greater subtlety, variety and freshness.

Lamb’s embrace of digital processes has already been underway for several years. She’s been using apps to convert imagery of still-life paintings and portraits into pixelated patterns akin to tapestries, which she’s then painted over by hand.

Under the museum and gallery closures of COVID, however, she lost the living audience needed for a multi-sensory encounter with her 3-D installations. The shift to greater use of digital tools not only sped up copying, assembling, and re-producing imagery but also offered an easy way to scale up her marks.

In her exploration of installation, a time-based medium that engages free movement and produces perceptions of spatial encroachment, however, Lamb had begun to work with a heightened sense of contradiction between two-dimensional illusion and three-dimensional presence.

The illusion of two dimensions
There is a marked difference, though, in her digitally-aided compositions. These convey the illusion of two-dimensional space but imbue it with complexities best absorbed by imagining repeated spatial encounters compressed over time into a single visual space and moment.

While Lamb has returned to a more painterly way of engaging her audience, this new dynamic has offered another means for exploring multiple moments in time, akin to the effects of Cubist and Futurist painting.

The same labor-intensive compulsion that has held her back has pushed her forward. “I needed to make the thing, in the same way I needed to paint all the original paintings that I was painting from. People were asking, why don’t you just make those as digital projects or digital prints or an NFT? For me it’s about making the painting. Those are just tools to make that painting. I’m going to resurface the entire damn thing and color mix-and-match it and work the thing to death. For some reason, for me, everything has to be labor-intensive. But there’s always a kind of absurd craftsmanship to it. A part of you has to be screaming while you’re doing it.”

Beyond decoration, in a time of struggle
In the end, Lamb’s innovations in process have aligned with her concerns about content.

“I am interested in the power engendered by pointing back to antiquity in times of struggle or trouble, and what that means in decoration,” she said.

Her recent imagery appropriates both Greco-Roman decorative motifs discovered at Pompeii in the 16th century and their subsequent importation into French wallpapers, embedding these themes in a politically-tinged meditation on freedom and domination.

In antiquity, the painted wreaths and bouquets adorning patrician villas celebrated a leisure cultivated on the back of a slave economy. Later French designs incorporating their baroque efflorescence evolved in a classical direction after the French Revolution to reflect changing political sentiments and loyalties.

Lamb’s critique of how beauty and power work together is central to today’s aesthetic discourse. Her remixed forms, dependent on new forms of hi-tech empowerment, compel our attention and re-contextualize the values of beauty unearthed from a previous age.

Attractive yet resisting easy assimilation, her new works prod us toward further inquiry. Who is appropriating such imagery in our own time, and for what purpose? What messages of pedigree, privilege and dominance do those with the economic means to acquire these works project? Lamb shows us it’s a matter of survival to read the power relations hidden beneath the surfaces.

Kirstin Lamb, “Floral Remix,” at the Jennifer Terzian Gallery in Litchfield, Conn., will run from May 28-July 9, 2022.