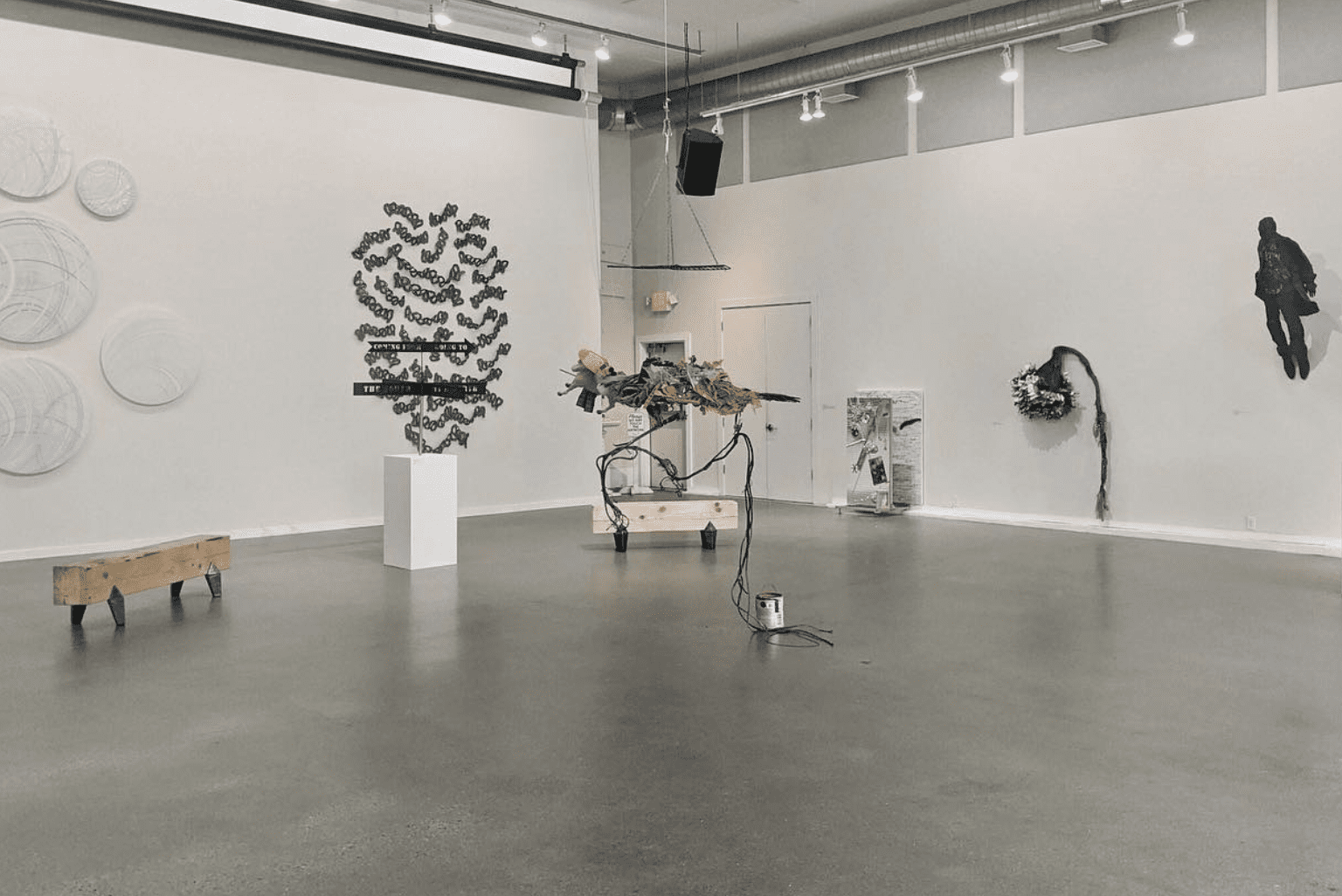 ART! – “Spacing Out” at the Jamestown Arts Center

“Spacing Out: Expanding the Field of Vision” and the companion outdoor public art exhibition “Spacing Out(side)” are now the featured exhibition at the Jamestown Arts Center. The exhibit ends on August 14th. Gallery Hours: Wed., Fri., Sat., 11 am – 3 pm + Thurs., 11 am – 7 pm + by appointment.

Ed Schlossberg’s work will be discussed with the artist and curator Karen Conway at “In Conversation: Ed Schlossberg & Karen Conway on Wednesday, July 28th from 7:30 to 8:30pm on ZOOM for a suggested donation of $10. RSVP for Zoom link

Edwin Schlossberg’s artwork portrays words as art, turning poems into visual objects to make them more accessible for the viewer. He has worked in a variety of mediums, including vinyl, plexiglass, aluminum and copper.

Before he was known around the world for how he has changed museums, incorporating interactive technology and audience engagement into their core, Edwin Schlossberg was an artist and a poet. Over the last 50 years, Schlossberg has used words and images to create visual and poetic worlds in his art, using various and unconventional media.

Schlossberg developed as an artist during the 1960s in New York, as a member of its dynamic art scene. Despite working with and befriending several of the most famous artists of that era – Jasper Johns, Robert Rauschenberg and James Rosenquist – Schlossberg’s style has always been his own. While his contemporaries played with words as form, Schlossberg insisted on their meaning, creating poetry with a distinct visual style. Some of his earliest works were poems written on a typewriter on aluminum foil – he created a new application for this everyday material whose artistic value now seems obvious.

Schlossberg’s approach has always been inventive: he received Columbia University’s first combined doctorate (in Physics and English & American Literature), an accomplishment which has enabled him to write poetry and create art on subjects which might intimidate others: neuronal imaging, the earth from above, gravity, systems mapping and other subjects. By making them visual, he has made them legible outside of the technologic and scientific realm.

Through a friend, Suzi Gablik, an artist and art historian, Schlossberg met Johns and Rauschenberg, who became close friends and collaborators. Around this time, Schlossberg also met Tatyana Grossman, a Russian printmaker, and publisher, who ran Universal Limited Art Editions, a lithography studio at her home on Long Island. Grossman published Schlossberg’s first book, WORDSWORDSWORDS, with an introduction by Rauschenberg, which was exhibited at the Jewish Museum in 1968. The poems were presented in an aluminum box, and the last poem, printed on four sheets of Plexiglas, broke apart when the reader picked it up. It was ”about poetry,” John Russell wrote in a critique in Art International, but ”also about the physical act of reading poetry,” fully immersing the reader in the process of viewing and understanding art.

Schlossberg’s work, including his contribution to “9 Evenings: Theatre and Engineering,” a 1966 series of performances resulting from the collaboration between artists and engineers, has always employed “the idea of trying to use technology as a contextual support for art,” he said in a 2015 interview. This technological framework is evident in his use of unconventional materials: vinyl, Plexiglas, aluminum, liquid crystal that changes color depending on ambient or applied temperature, copper, Scotchlite, highway sign sheeting, rice paper, bamboo, and bronze.

His works have appeared in numerous solo and group exhibitions throughout the United States and internationally, and can be found in private collections and museums, including the Solomon R. Guggenheim Museum, the Metropolitan Museum of Art, and the Museum of Modern Art. In addition to his accomplishments in visual art and poetry, Schlossberg is the Founder and Principal Designer for ESI Design, a leading experience design firm in New York.

In 2004, he won the National Arts Club Medal of Honor, and in 2011, was appointed by President Barack Obama to the U.S. Commission on Fine Arts.

Schlossberg is the author of 11 books and is also the principal and founder of ESI Design, Inc., an experience design studio in New York City which celebrated its 40th anniversary in 2017.

Karen Conway has been the Director of Exhibitions at Jamestown Arts Center, RI for the past seven years, where she also curated the exhibitions: Paper-Made, 2014 and Word: Text in Contemporary Art, 2017, and the upcoming Spacing Out: Expanding the Field of Vision, Summer 2021, among many others. Conway has held various positions, including curator, gallery director, collections manager, program coordinator and research consultant at numerous institutions.

Conway has worked at the Whitney Museum of American Art, Newport Art Museum, and Heritage Museums and Gardens, as well as numerous galleries and private collections, including curator to Edwin Schlossberg since 2017. Conway holds a graduate certificate in Museum Studies from Harvard University. In addition, Conway has a MA in Feminism and the Visual Arts from the University of Leeds, UK, where she studied with Griselda Pollock.

About the Jamestown Arts Center:

The JAC was conceived in 2007 by a group of Jamestowners passionate about the arts who collectively envisioned a dynamic arts center in the heart of town. This committed group became the organization’s founding board members and began working in earnest to make their vision a reality. In February of 2008, the JAC board launched a Capital Campaign to purchase and renovate a former 5,000 square foot boat repair shop into a beautiful arts center designed by Estes/Twombly Architects. The property was purchased on December 21, 2009, with contributions and support from many generous individuals and foundations and soon after opened its doors as a multi-disciplinary visual and performing arts space.