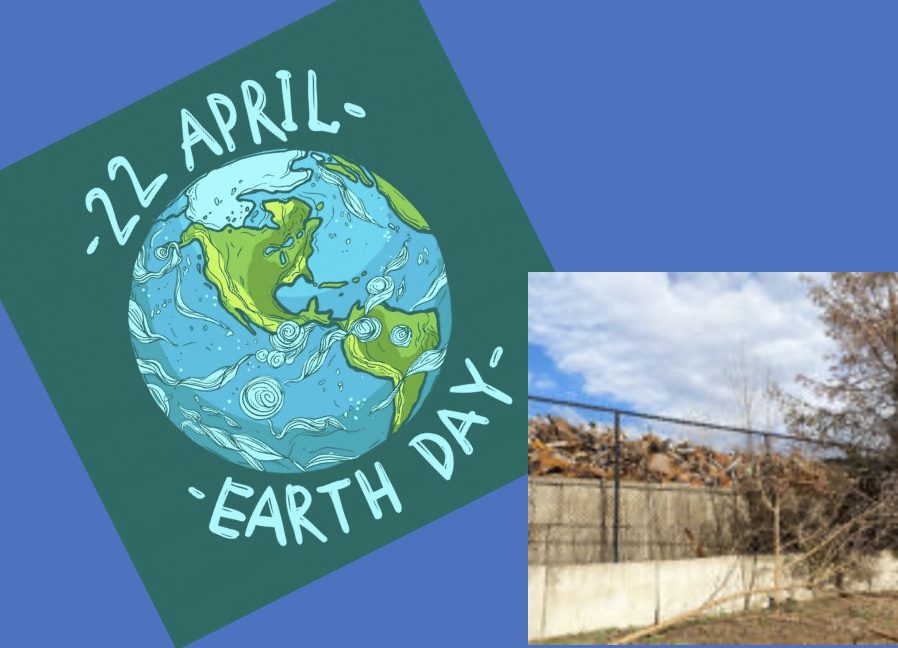 Photo: Pine trees planted as a buffer to prevent dust from the piles of scrap metal from being blown from a Sims Metal location on Allens Avenue are all dying, apparently.

The view of the downtown Providence skyline from the vantage of Allens Avenue is not one to be captured or portrayed in brochures marketing Rhode Island as a “cooler and warmer” tourist destination.

It resembles, in miniature, the view of the New York City skyline from the highways traversing the industrial swamps of the Meadowlands in New Jersey, from which the Big Apple seems to appear as an Oz-like, mythical destination of progress and prosperity looming on the horizon.

From most travelers, north and south on Interstate 95, Allens Avenue is encountered as a sharp curve in the highway, with a visual landscape dominated by a blur of holding tanks, large billboards, and the iconic Big Blue Bug.

But, for those living in the neighborhoods adjacent to Allens Avenue, no one needs to be reminded about how the money is being made; the sources of the gritty transactions are all visible, in plain sight.

• The constant hum of truck traffic traversing the elevated, arching invertebrate of Route 95, and beneath it, on Allens Avenue.

• Layers of toxic dust that coat the sidewalks, homes and parked cars.

As retired pediatrician Dr. Peter Simon described the Allens Avenue landscape at a community meeting opposing a proposed waste transfer facility in early 2020, it is the home of Rhode Island’s two largest exports – scrap metal, and sexually transmitted infections such as syphilis.

Investing in canopy
A new, more hopeful vision of what Allens Avenue might become is emerging, articulated by Linda Perri, a community leader of the Washington Park Association. She has launched a new initiative, “5,000 trees in five years in 02905,” to transform her neighborhood.

“Wouldn’t it be great,” Perri said, envisioning a billboard promoting the campaign along I-95. “Plant 5,000 trees in five years – we could get national attention, you know.”

Perri continued: “You have to start somewhere. The Jewelry District has been transformed into the Innovation District. We could create an Innovation Waterfront District here, with maybe some marine technologies or fish hatcheries, and perhaps create mixed use opportunities west of Allens Avenue and up into Eddy Street.”

The connections between increasing tree canopy and reducing intimate partner violence is at the center of a major effort by the Newport Health Equity Zone, working with the R.I. Coalition Against Domestic Violence and the Women’s Resource Center.

As Cynthia Roberts, the empowerment evaluator for all programs at the R.I. Coalition against Domestic Violence, explained at the February 2020 meeting of stakeholders convened by the Rhode Island Foundation to discuss its long-term health plan, “Open space had been a big priority identified [in the community needs assessment] but there was no funding. When the federal Centers for Disease Control and Prevention came out with a new funding [proposal] and said that we’re moving upstream, it created an opportunity for the work involved with preventing intimate partner violence by greening urban spaces.” [See link below to ConvergenceRI story, “Greening urban spaces as a prevention strategy for intimate partner violence.”]

The Pawtucket-Central Falls Health Equity Zone was recently awarded a $100,000 grant to expand tree cover in neighborhoods that don’t have enough trees, according to a story in ecoRI News. Groundwork Rhode Island will be working with the municipalities, residents, and other stakeholders to plant 140 trees in neighborhoods with the hottest temperatures, least number of trees, and other vulnerabilities that could be addressed with more trees.

In terms of scale, the South Providence initiative seeks to plant 5,000 trees, compared to the 140 plantings planned for Central Falls and Pawtucket – nearly 40 times as many trees.

“As we get more people living in our urban corridor, we need to focus more on housing.” Perri continued. “We could put in some parks, create waterfront access, and all of a sudden, South Providence isn’t the pits that it’s been for 30 years. It becomes [a neighborhood] that is normal. We deserve better than what we have. Everybody knows it.”

Providence City Councilman Pedro Espinal endorsed the idea of planting 5,000 trees in five years in the ward he represents. “It is a great plan, one that has support,” he told ConverenceRI. “It’s going to take people coming together. It has to be a combined effort, between government and community groups. But the key role is played by citizens, the people who live in this community; they are the driving force.”

Here is the ConvergenceRI interview with Linda Perri, talking about the effort to plant 5,000 trees in five years in 02905, perhaps one of those “big ideas” that the Rhode Island Foundation will recommend investing in with the $1 billion from the American Rescue Plan.

ConvergenceRI: Have you announced the new initiative publicly?
PERRI: I mentioned it at the Port of Providence meeting on April 14. [Providence City Planner] David Everett thought it was a good idea.

My mission is to engage nonprofits and businesses in and around the Port area, not discriminating, including all of them. Johnson & Wales University, Lifespan, the Narragansett Improvement Company, Sprague, even the strip clubs.

My goal is to get them to agree to plant trees and maintain them, as part of a long-term plan to correct the impact of the “heat island” that is happening here.

I want to include the neighborhood residents and the youth groups and the schools. It’s going to be a big deal, but I think it is achievable.

In addition, my goal is to create a few urban parks in the industrial areas along Allens Avenue.

Washington Park, unfortunately, has a lack of curbing, so we need to come up with some kind of creative solution to that, without having to spend thousands and thousands of dollars on granite curbs.

Because lower South Providence, where we are in Washington Park, has the least amount of canopy [tree cover] in the whole city of Providence. We have heat islands, the scourge of Allens Avenue. We have a lot to counter, so we need the most trees.

The initiative will be a collaboration working across departments, working with the DEM and my city council person, Pedro Espinal.

Unfortunately, we now have a big salt pile on Public Street at [its intersection] with Allens Avenue, where Champion Salt is at the corner. We’d like them to go into the Port [of Providence], but because of the Sims Metal sprawl, they have expanded their footprint along Allens Avenue.

Sims Metal has a mandated buffer of pine trees, which they allowed to die. Most of those trees are dead. People think it’s cosmetic, but tit’s not. The buffer is there for the reasons that we are breathing the dust from the scrap metal piles all the time.

ConvergenceRI: What kinds of outreach do you plan to find supporters for your initiative?
PERRI: I will be approaching the Rhode Island Foundation; I will also be approaching GrowSmart RI, and I will be approaching Meeting Street School, among others. The Washington Park Association is not a nonprofit, but we plan to collaborate with another nonprofit to get funding for the intiative.