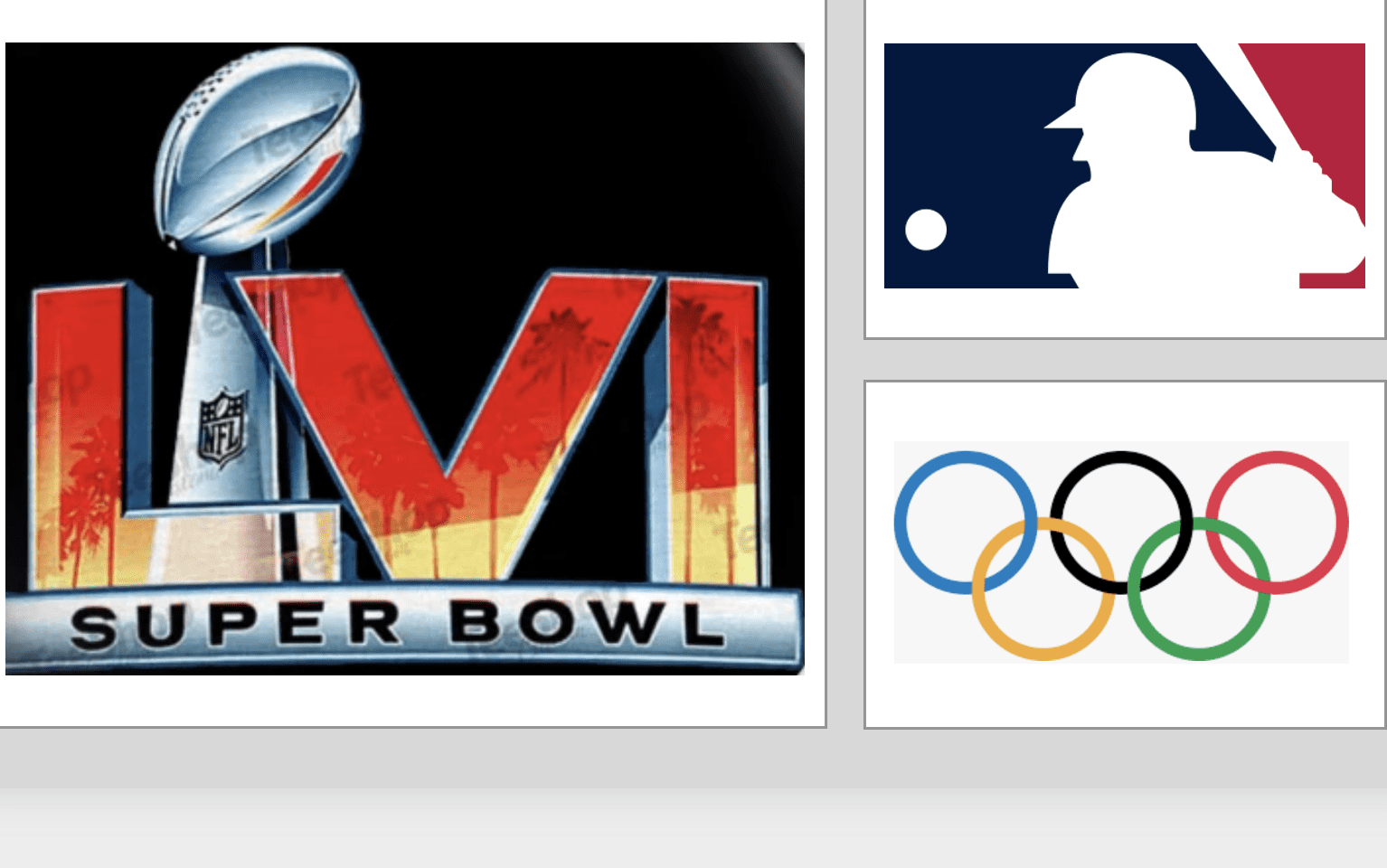 Back by popular demand as we continue 2022 with 3 mini columns wrapped in one. The Winter Olympics, the Super Bowl and MLB

Because the three subject sports column was so well received when it published a few weeks ago, we figured that with all that is happening with sports not only locally, but throughout the world, we would continue to give our readers an easy to read 3-for! So…

On Friday, February 4th, the opening ceremony kicked off the 2022 Winter Olympics in Beijing, China. The competition started two days before the Olympic flame was lit up to “officially” kick of the games. The opening ceremony was full of spectacular graphics, special effects, and a glitzy production not quite seen before, but with its underlining messages on a political front as well. Between the covid pandemic (brought to you by….?), and the tense political landscape where Russia and China have become close friends (the enemy of my enemy is my friend!), there has been a backlash. NBC who owns the rights of production in the United States and has paid billions for that right, has elected to keep most of their broadcast team home, and cover the event from long distance. A mere 2-3 reporters went through the extensive system it took to travel, stay and report from The Bird’s Next in Beijing.

The Olympics have always been about bringing the world together for a few weeks and forging a bond that all mankind can agree on, celebrate, and be united on from behind a common cause. But it’s hard not to think about the impending invasion of the Ukraine by Russia, the continued unstable Middle East region and the continued problem that is North Korea. The pandemic stands alone in a blanket thought. It seems to undercut all the Olympics set out to be. When growing up, I was rooting for everything and everyone USA! Who can forget the USA hockey team upsetting the Russians to go on to win the gold medal in 1980? Or when Jesse Owens gave Hitler the middle finger as he won gold at the summer games that were held in Germany in the 1930s? Political the games are not supposed to be, however, political they have always been.

It’s time the youth of the world take back the Olympics and bring them back to their original intentions. Watch the athletes interact with each other before and after their competitions and cheering for each during their events. It shows the world that the athletes truly get it. There is little political resentment but a real support for each other. As I watch the Olympics now, I find myself pulling for the athletes of every country. These athletes put it all on the line every time they compete and put themselves out there, that should be applauded! So, I say “GO WORLD!” Keep politics out of the Olympics!

Los Angeles Rams and the Cincinnati Bengals playing for the Super Bowl – who would have seen that coming?

For the first time ever the Winter Olympics and the Super Bowl will be running side by side. The NFL expanded its regular season by one week, pushing the Super Bowl into mid-February. This created a collision of two worlds that hasn’t happened before and for those big-time advertisers of both events it means dishing out big bucks to be part of both events, all during pandemic times. Advertisers are purchasing commercial time for both events; it makes you wonder. Commercials range from up to $7 million a spot – and guess what? They are all sold out. Two weeks into the offering, with 4 weeks left to go.

As far as the two teams involved, the Los Angeles Rams have been involved in several Super Bowls. Winning one and losing the other (two notably to our own New England Patriots). Investing heavily into this season by acquiring Matt Stafford from the lowly Detroit Lions, and trading for Vonn Miller the stable of the once mighty Denver Bronco defense and Odell Beckham from the promising Cleveland Browns. The Rams have turned themselves into the Los Angeles Lakers and Dodgers with a show time mentality by acquiring the talent they need for now rather than for the future.

The Cincinnati Bengals have had levels of success to far, and in between, throughout their history. Playing in their third Super Bowl, losing both their previous appearances when Ken Anderson and Norman “Boomer” Esiason were the Quarterbacks. Since their last appearance the team degenerated to the point where they were so bad as an NFL team, their fans began to wear paper bags over their heads in embarrassment to what they renamed as the Bungles! Even as the Bengals hired head coach Marvin Lewis, a big-name defensive coach, the Bengals showed little progress and after many years as the head coach Smith was replaced by Zac Taylor in 2018 (the 10th head coach the Bengals had since them joining the NFL in 1968).

Taylor began rebuilding the Bengals by creating one of the NFL’s youngest offensives. Joe Burrow at Quarterback, running back Joe Mixon, Wide receivers Tyler Boyd and Tee Higgins and Ja’Marr Chase. The Bengals came out of the gates this season strong and as everyone expected them to slow down and fall, the Bengals kept soaring to their division championship and knocking out the mighty Kansas City Chiefs to punch their ticket to the Super Bowl.

Who is going to win? Well, the odds makers are favoring the Rams, who have home field advantage, as they are playing at their home stadium, Sofi Stadium. A state-of-the-art football mecca that sits in the middle of downtown Los Angeles, and like last year where the Tampa Bay Buccaneers took the same road as they played and won their Super Bowl at their home field, I am predicting that the Bengals will come out on top and beat the Rams. Once again proving building from the ground up will trump the “better to buy ‘em” rather than to build them mentality that is the mantra that all teams from Los Angeles seem to have.

As the Major League Baseball’s “Lock-out” continues, do the fans really care?

Since the end of last year’s end of the season route by the Atlanta Braves as they won the World Series, baseball’s owners initiated a “lock-out” of all players from all major league baseball facilities. The Billionaires taking on the millionaires, the owners going up against the players.

This power move by the owners will do nothing to endear themselves with the already deteriorating fan base. Baseball is a dying spectator sport. As the drop in attendance over the past decade has determined, the sport is slow and boring to most fans. Ticket prices are too expensive for the average fan to afford. When you figure in parking, the cost of food and investing over three hours of your time to watch a slow-moving sport with very little action. Can you blame the average fan from passing on going to a game and putting their hard-earned money elsewhere?

Gone are the days where baseball was America’s favorite pastime. The want it now generation isn’t interested in baseball anymore and therefore no one seems to care about baseball and there is really no mention to the status of the lock-out.

Baseball shot itself in the foot when they went on strike in the 1980’s and really never recovered. Add in a slow moving, painful to watch from first pitch to final pitch, is it any wonder that the fans have moved onto other, more exciting events to watch? It is time for baseball to take a long hard look at itself and reinvent the grand old game because no one cares anymore! Millionaires vs Billionaires. The question is, who cares?