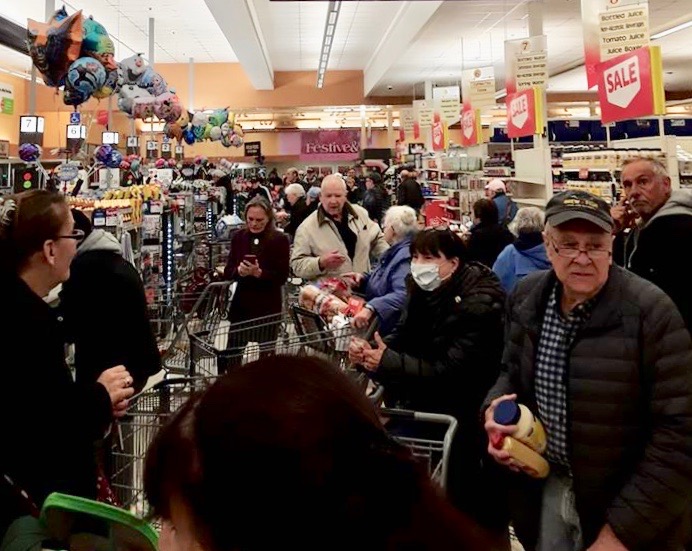 A SitRep on Grocery Shopping in the days of Coronavirus

When I was in the Military we would provide the Commanding officer with a “SITREP”. A SITREP is the detailed status of the situation during an emergency.

Here is a Market SITREP for Southern New England regarding the Coronavirus. I am sure all of us have heard about the cases day in day out. What is not being told is the general situation in the towns and cities.  This writer needed a few items at the market so to kill two birds with one trip I also canvassed the stores, in general.

Most markets in the East Bay area had ample supplies. Some shelves were empty but other name brands of items were available instead. Soups, light cream, and the elusive Toilet Paper were the challenge. One Stop and Shop in Massachusetts actually had TP. I picked up some items at that store and while waiting to check out I noticed there was a six foot highly attractive blond in front of me finishing her check out. She noticed I had two packages of TP and asked where I found them. I told her, and then offered her one of my packages. At this moment in time I figured it was comparable to offering her a box of chocolates. or flowers, or roses. She turned up her nose and said, “no, thank you”. She ran off to get her own. Apparently my roll wasn’t large enough?

In other stores people continued to be friendly. and the cashiers as always were very friendly in Market Basket. I actually found light cream in that one. Crisis or not, I can get by without some items, but I draw the line at light cream. I will go to the local farm and persuade Bessy the cow to put out as I must have light cream in my coffee.

All in all, the stores were in reasonable shape. Statements were made about the shocking condition our seniors endured this morning at 6 am in the stores in the West Bay. I was in Stop and Shop on Route 5 in Warwick on Friday night. The place was a mess. Numerous isles empty. Numerous coolers empty. The store was filthy and even the black cash register belts had scum on them. Worse yet I went into the banana section and a woman was coughing on the bananas on the other end of the banana aisle. Word out was that the Route 2 Stop and Shop was in much the same condition. I don’t know why there is such a vast difference between East Bay S&S and West Bay S&S. Nonetheless it is a huge difference. Hopefully the stores square that away, ASAP.

The other little tidbit noticed was a bigger police presence in the retail parking lots including members of the State Police. I did not see a parking lot that wasn’t patrolled. Hats off to the Watch Commanders! Like I said in my first SITREP – we will get through this; it will be inconvenient; and will at times be painful, but we will get through and be okay.